Takn from Killererin - A Parish History 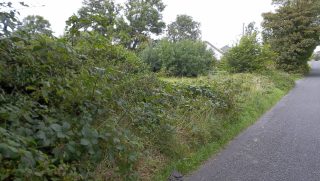 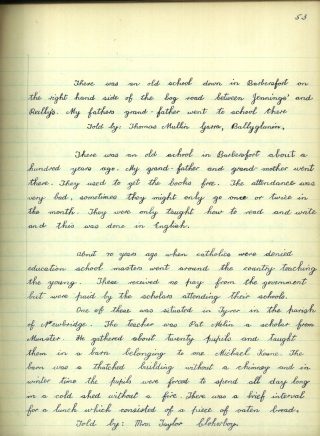 The master of Barbersfort school was Thomas Sullivan who was Roman Catholic. Attendance at the school was free. Mr. Sullivan did not state a salary but had ‘a promise of payment from R.C. clergyman’[1]. The school-house was described as ‘part of the master’s dwelling-house’[2]. According to the protestant returns there were 20 Roman catholic children attending the school while the Roman Catholic returns reported there were 40 children in attendance[3].

However an inhabitant of Garra, Thomas Mullin stated in 1938

“There was an old school down in Barbersfort, on the right hand side of the bog road ‘between Jennings’s and Reilly’s…my father’s grandfather went to school there”[4].  Told by Thomas Mullin, Garra, Ballyglunin. There is no longer a school in operation in the townland of Barbersfort.

There was an old school in Barbersfort about a hundred years ago. My grandfather and grand-mother went there. They used to get the books free. The attendance was very bad, sometimes they might only go once or twice in the month. They were only taught how to read and write and this was done in English.

Travelling the country to teach the young

About 70 years ago when Catholics were denied education, school masters went around the country teaching the young. These received no pay from the government but were paid by the scholars attending their schools.

One of these was situated in the parish of Tyrer in the parish of Newbridge. The teacher was Pat Nelin, a scholar from Munster. He gathered about 20 pupils and taught them in a barn belonging to one Michael Keane. The barn was a thatched building without a chimney and in winter, the pupils were forced to spend all day long in a cold shed without a fire. There was a brief interval for a lunch which consisted of a piece of oaten bread”. (Told by Mrs. Taylor, Cloherboy).