Glenrock to be Raffled 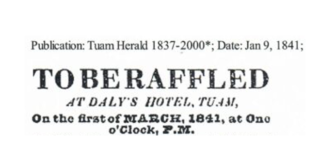 glenrock to be raffled 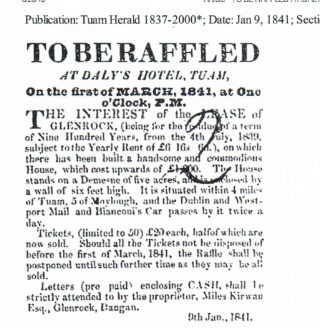 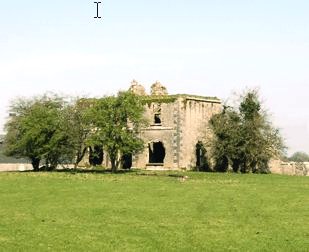 The following advertisement appeared in the Tuam Herald of January 9th 1841 before the Great Famine.

THE INTEREST of the LEASE of

GLENROCK, (being for the residue of a term

there has been built a handsome and commodious

stands on a Demesne of five acres, and is enclosed by

a wall of six feet high. It is situated within 4 miles

of Tuam, 5 of Moylough, and the West-

port Mail and Bianconi’s Car passes by it twice a day.

now sold.  should all the Tickets not be disposed of

before the first of March, 1841, the Raffle shall be

postponed until such further time as they may be all

strictly attended to by the proprietor, Miles Kirwan

Glenrock (later home to the RIC Barracks) is located on the outskirts of Barnaderg village on the main road to Tuam. Its ruins can still be seen there today.