Article first published in The Tuam Herald of April 8th 1972 and given to us by Stephen Flaherty, Tuam. 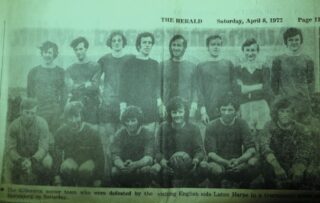 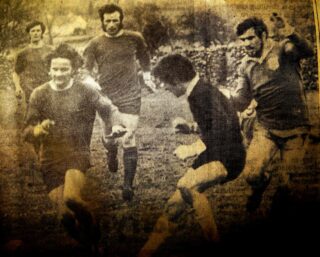 The visiting English side Luton Harps were unlucky to have encountered a swirling gale and torrential rain at Barnaderg on Saturday last and were not quite able to display the skills and clever touches they showed against Tuam last year.

Nevertheless they were vastly superior to the Killererin side that fought hard but without finesse or construction, in a game that was watched by a rather disappointing crowd.

Home side go into lead

The home side had first use of the wind and led 2-1 at half time. A penalty by Stephen Flaherty and a second goal by Jarlath Burke accounted for Killererin’s goals.

Luton at last found the winning formula in the second period when they shot four goals past Killererin’s goalkeeper Mattie Nolan. Despite conceding five however, Nolan had a splendid game for the home team and saved well on numerous occasions.

A hard curling drive from 20 yards made it 2-2; a long drive from a defender was headed over the goalkeeper’s head to make it 3-2 for Luton; then a quickly taken free across the face of the goal and the centre forward neatly stepped over the ball for the winger to side-foot it in for 4-2., before finally the centre-forward rolled a free to the side of the defensive wall and the right half angled it wide of the ‘keeper.

Killererin had a consolation third goal from Jim Hynes but the result was never in doubt and Luton swung the ball around casually in the closing stages, content to play it out to the finish without launching any worthwhile attack.

At a reception in the Country Inn on Saturday night, the John Niland Cup and medals were presented to the Luton captain who presented a plaque to Killererin as a memento of the occasion.

Killererin were also invited to travel to England for a return game with Luton, and they plan to accept the invitation in August.