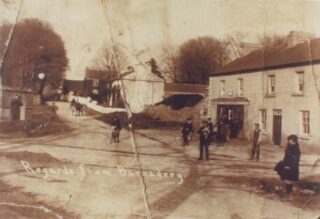 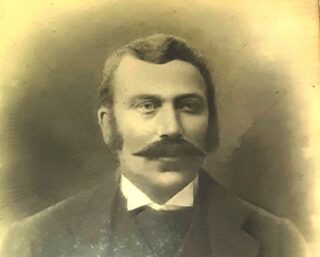 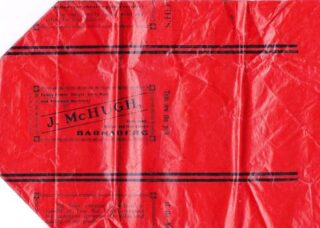 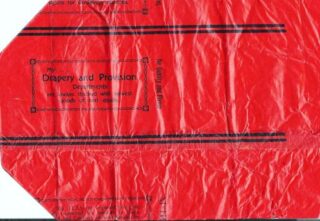 John McHugh owned McHugh’s shop listed in Barnaderg South in the 1901 census. He employed a female general domestic servant and a male shopman (grocer). The shop is listed again in the 1911 census and still owned by John McHugh and his wife Catherine. At this time, they employed a female, listed as a drapery assistant. (According to the census which appears below, the drapery assistant is listed as  Lillie Devaney – a cousin). This would have been a one-storey thatched building, which also served a post office.1

John died suddenly at the age of 54 years in October 1911. It was reported that “Mr McHugh was a businessman that built up for himself an enviable reputation, and the manner in which he perfected anything he took on hand was permeated to his own personality”.2

Following his death, Catherine ran the Post Office with her daughter Delia. This was located in the shop now run by her son Patrick. Patrick married Barbara Burke, Knock Lodge and they lived there from the time of their marriage.3

A robbery occurred in McHugh’s and the following account appeared in the Tuam Herald at the time. “On Monday night about 11 o’clock, 5 men knocked and got admitted to the shop of Mr. John McHugh, Barnaderg.

Two of the men had revolvers and were not disguised, whilst the other 3 men were masked but had no revolvers. They said they were I.R.A. men and proceeded to take goods from the place. They took 249 lbs of bacon, 40 pairs of boots, 12 lbs of tobacco and 5s in cash. The post office is attached to the shop premises but the raiders did no damage there beyond upsetting papers and evidently searching for money which was not in the place.4

In later years, this same shop stood the test of time having been closed for a while and then bought by Bobby Gilmore, Moylough. He sold groceries, some hardware and bag meal for poultry and animals.

Sometime later on Christy Mannion from Belclare and his wife Estelle (Morrisey) Barnaderg, owned this very successful business for many years. Shortly after Christy’s sudden death, the Mannion family sold the shop to Miko and Bridie Keane (nee Stone) Barnaderg, who refurbished the interior and continued to run a thriving grocery shop. At the present time, this is the shop now known as Centra Supermarket, owned by Patrick and Anita Stone who bought it on 3rd May, 1983.5

The following information was provided by Mary Walsh Love, a great grandaughter of John McHugh who also supplied the photos of the tea wrapper from John McHugh’s Shop Barnaderg:

‘McHUGH’S Teas are the pick of the Market for Quality and Flavor’. ‘My Sales continue to increase so rapidly in Teas that I am convinced my customers appreciate the value and quality of my goods’. ‘My TEAS are imported from the most renowned tea gardens in India, China and Ceylon; and are blended by eminent tea specialist’.