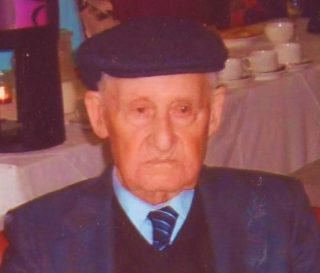 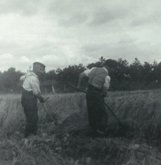 Stephen lived all his life in Tygreenane except for the short while he spent working in England and here he recalls some of his memories of times past.

Tygreenane was mainly a farming community and Clonberne creamery was a source of income in the 1960’s for those that ‘sent the milk away’. You got 2/6 (2 shillings and 6 pence or half a crown as it was known) for 10 gallons of milk. Every morning and evening the cows were milked and the milk poured into milk cans. This milk can was collected at the head of the road by the creamery, a tractor and trailor would collect it. In the evening, the can was returned with the skim milk and the farmer would collect it. This scheme came to an end in the 1970’s.

Names in the village where he lived

Tygreenane where he grew up had 6 families with the surname Duggan at one time, but none remain today. The names have changed through marriage and the movement of families.

Land Commission offers a move for a better way of life

During the 1950’s, the Land Commission offered a ‘change’ as it was known or a ‘move’ giving some families the opportunity of a larger amount of land and a house, in places such as Laurencetown, Eyrecourt or Redmount Hill.

John and Mary Gilligan and their family moved to Eyrecourt. Martin and Mary (nee Long) Duggan and family moved to Laurencetown. These were the only two households that moved from the village of Tygreenane. Other villages also had families move away. It was always a time of sadness and was very difficult for the families involved, leaving their homes, their friends and their neighbours behind them. Some of them never returned. Transport was scarce and what now seems a very short distance was a lot longer then. It was around this time also, that the Land Commission built houses for some of the families that remained in Tygreenane and this saw an end to the thatched houses with the familiar half door.

There was very little work back then and emigration was an accepted part of life. Nearly every family had 1 or 2 members of the family in England or America. A very small number went to Australia. Money was sometimes sent home to help parents and the ‘parcel’ containing clothes, money etc. would come from America now and again. This was very welcome and kept many families going throughout the year.

The letters and telegrams came and went through Barnaderg and Bridie Fahy was kept busy in the post office, as that was the nearest telephone available at the time. The post office was next door to the public house owned by her father, Jim Fahy. The postman for many years was local man Miley Nolan who delivered the post on his bicycle come hail, rain or shine and every house had great time for him. He brought all the local news as well as the post.

Another source of local news was the arrival of Christy Mannion with his travelling shop on a Monday evening. The women would have the eggs ready to sell and a list made out of provisions they needed. A bartering system existed whereby groceries were swapped for eggs regularly. Christy was part of the week for many years and provided a great service. He had everything that was needed in the lorry and more important he had time to talk. Pat Gormally from Ballaghalode also called to some houses on a Saturday evening for a short time. He drove a van and carried household supplies.

In years gone by in the church, there was a sodality which took place monthly. This involved going to confession and 1st mass to receive communion. There was a tradition of men’s sodality one month and the women’s sodality the next and then the children’s. You had to fast from midnight if you were receiving communion and very often people had to walk or cycle the few miles to mass on Sunday morning.

In Killererin, there was always a parish priest and a curate. The parish priest was always an older man who lived in the priest’s house and the curate stayed nearby in a house within the community. The priest always said mass with his back to the people, as was the way and you knelt at the altar rails to receive communion. Nobody could touch the communion bread as we do today. If it was dropped on the floor accidently, at the altar rails, a white cloth was taken out and placed over the communion bread until the priest took it away. Then that area of the floor had to be washed and blessed.

Benediction was very often said after mass and the rosary was said on Sunday evenings. From time to time, you could have a Mission come to the parish, with weekly evening masses and preaching by the mission priest. Stalls would be set up outside the church selling holy pictures and rosary beads and holy medals.

The red squirrel was a common sight in the trees all along the area of road leading to Knock from Barnaderg; the children going to and from school often caught a glimpse of them. Both the trees and the squirrel have long since disappeared.

The sound of the cuckoo was a sign of summer and the corncrake was another sound heard in the fields. A lot of these things are now just a memory for older people.