You are here: Home>People>Emigration>Peggy Boyle, Togher, emigrated to the USA in 1958

Peggy Boyle, Togher, emigrated to the USA in 1958 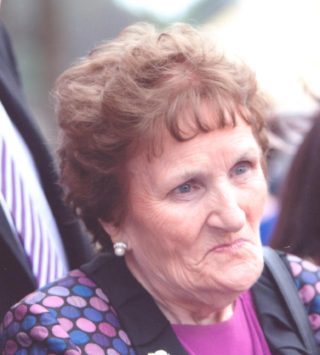 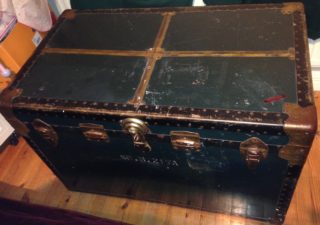 Leaving her home in Labasheeda

Peggy is the widow of Pat (Sonny) Boyle, Togher, who she met in the US and later married. She was born into a family of 12 children whose parents were farmers and lived in Labasheeda, Co. Clare. At the age of 19, she emigrated to America in 1958, travelling by plane from Shannon. She was excited about going and had wanted to go for some time. Her sisters, Frances, Nora and Brigid, and brothers, Michael, John and James, were already settled in Long Island, New York. She also had 2 aunts living in America at that time.

Before she went, they had an American Wake in her home in Labasheeda. Neighbours, friends and relations all called to the house and there was music, singing and dancing. Like many homes in Co. Clare, theirs was a home filled with music and indeed her brothers played with a band in America and used to play in all the Irish clubs. They subsequently formed their own band and Peggy’s grandchildren are continuing the tradition today (the Tully twins Michael and Robert from Cooloo, Moylough, who are members of the increasingly popular band, the Kings of Connaught).

Peggy was accompanied to Shannon by her mother; her father really did not want to let her go. They went by hackney to Shannon and she brought just one case with her. Her mother sent rashers and sausages with her, for her brothers and sisters, and remained with her until it was time to board the plane. Peggy was excited as this was her first time travelling by plane and she was not really conscious of how lonely her mother must have felt as she turned for home.

Arriving in America for the first time

When she arrived in New York, her first impressions were of how big everything seemed. However, she was neither frightened nor worried, as she was being met by her brother James. As it was a Sunday, and it was almost time for Mass, he brought her straight to the church for Sunday mass, before bringing her home to his apartment, where she stayed for some time.  It took her a while to settle in and to get used to this new way of life. Long Island was very different to Labasheeda, Co. Clare.

It took almost 8 weeks for her to find work. Every day, she used to travel via the subway to different destinations to seek work. At all times she was accompanied by either a member of her family or friends of theirs. Her family members used to have to take a day off work to accompany her and when they could not get a day’s leave, their friends volunteered to take a day’s leave and accompany her.

Eventually, she found work in an insurance company office where she stayed for 2 years. During the following years she worked in various different offices until she returned home to Ireland. Peggy says it took her 2 full years to settle properly in America, and if she had had the money for the fare home, she would have come home almost at once. She really missed her family and in particular her 3 younger siblings who had remained at home in Labasheeda.

While in America, her social life consisted mainly of Irish-American dances at weekends. They also used to frequent the movies. Her brothers usually played music at Irish clubs, John played and James sang. There were also Sunday afternoon dances from 2 to 6 p.m. She was in America 3 years when she met her future husband, Pat Boyle, from Tygreenane, Barnaderg, at one of these dances, which he had already been frequenting all during that time.

Pat had emigrated to America from Galway, 8 months ahead of her, in 1957. He was one of a family of 6 children. He had 2 brothers and 3 sisters. Three of his siblings, Mary, Bridie and Eddie, emigrated to England. Pat did not need to emigrate as he already had a good job with the ESB in Ireland, but there must have been an adventurous streak in him as, prior to going to America, he left his good job and went to England where he worked in the ‘electrical side of things’. While in England, he stayed with an aunt.

After emigrating to America, he lived with another aunt in Brooklyn, New York, and the first job he secured was in the famous New York store Tiffany’s, doing security work. One of the many famous people he saw while working there was Marilyn Monroe. He worked there for almost 2 years before he found employment with a phone company. He worked in the phone company for several years.

Courting Peggy and returning home to get married

After courting Peggy for 2½ years, they both returned to Ireland in 1963 to get married. In all, they stayed in Ireland for 6 weeks. They were both met by family members and returned separately to their own homes. Later, they both visited each other’s homes. This was, of course, the first time Peggy met some of Pat’s family. She did not meet his sisters Mary and Bridie or brother Eddie until the day of the wedding when they returned from England for the happy occasion. The same was true for Pat, who travelled to Labasheeda and stayed in Peggy’s home for a few days prior to the wedding. Four members of Peggy’s family travelled from America for the wedding, which was held in Ennis Cathedral, in June 1963.

Peggy travelled to Ennis Cathedral on the morning of the wedding. The reception was held from 2 to 6 p.m. in the Old Ground Hotel in Ennis and there were 90 guests at the wedding. Pat and Peggy then travelled to Salthill in Galway for the first night of their honeymoon and toured around after that. She heard later that a good portion of the wedding party stopped on their way home at Glynn’s Hotel, in Gort, and a great time was had by all.

Return to America where two children were born

After returning from their honeymoon, Pat and Peggy stayed a little while longer and then returned to America, where they stayed for 6½  more years and had 2 children, Kieran and Bernadette, before they returned to Ireland.

News of a house for sale in Togher

It was Pat’s sister, Nellie McDonnell, who sent them the paper clipping with details of a house for sale in Togher. The house was formerly owned by Miss Curran who used to teach in Garra NS and it is thought that, on retiring, she returned home to Connemara.

They jumped at the opportunity this presented and with their savings, paid for the house in full before returning home. The impetus for returning home was that they wanted their children to start school in Ireland and Kieran was almost at that age then. On their return, they moved straight into the house. They had given away most of their possessions to family members and friends in America before coming home, but they returned with the remainder in a trunk which they still have today and now is in her daughter Bernadette’s home in Cooloo.

The long search for work after coming home

It took Pat a long time to find work after coming home. He had bits of jobs here and there, but nothing that would maintain a family. At one stage, it looked like they might have to return to America, as many of the couples who returned home around the same time did eventually. It was 6 to 8 months before he finally managed to secure work and find meaningful employment in the Post and Telegraphs as it was known then (later known as Eircom).

For Peggy, it was strange settling in Togher. Once again she had to get used to change. She found it very quiet and different to Clare and to America, but she had good support from Pat’s sister, Nellie, who lived nearby and from Pat’s cousin Peg Donnellan who lived not too far away either.

The birth of Dolores (their 3rd child)

Peggy and Pat had another daughter, Dolores, who was born after their return home to Togher and now lives beside her mother with her husband Ronan and daughter Rachel. Bernadette lives in Cooloo with her husband Padraic and their 3 children, Michael, Robert and Laura, and Kieran lives in England with his wife Lara and 4 children, Rosemary, Grace, Isabel and Dominic. Rosemary is studying drama at the Guild Hall in London and Grace is hoping to follow in her footsteps.

Pat and Peggy’s grandchildren Michael and Robert are members of the band The Kings of Connaught, follow the link below to hear their excellent rendition of The Rocky Road to Dublin.’  Their other grandaughter Grace has written a nostalgic piece elsewhere on this website about being the 2nd generation removed from Ireland entitle’Home’  Follow the link below to bring you straight to her article on this website.

The Kings of Connaught