You are here: Home>Places>Ballina House 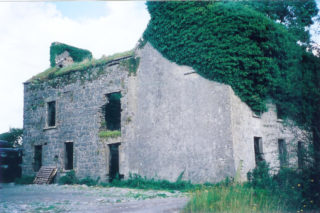 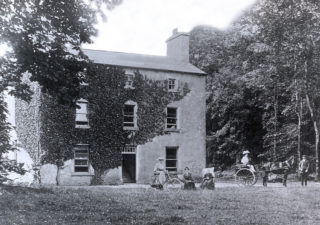 The house was built in 1833 by Henry Blake and occupied by members of the Blake family. The house gave employment to local men and women until 1952 when Aceheson Blake and his family left and went to live in Ballyglunin House after his father John died and Mrs. Blake, (John’s wife) died in 1953

The land was divided

The land was striped and divided among the local farmers by the Land Commission. Today only the ruins of the house remain and above the door inscribed on a plaque you can clearly see, ‘By H.B. Esq. 1833.’

In the 1950s, property rates were high and the roofs on some of the big houses stripped to avoid paying rates. This happened all over Ireland, thus ruining a lot of old estates and homes.

There is also a Children’s Burial Ground at Ballyglunin.  It can be clearly seen on the O.S map. It is thought that the village of Bóthar na Mimie was just beside the Ballyglunin Railway Station. There were up to one hundred families living there and even though meal was brought in during the famine, most are thought to have perished.