Excerpt from Killererin - A Parish History 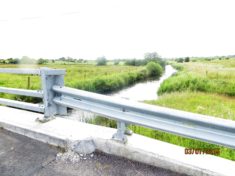 Cornacartan, Corn a Ceártan, “roundhill of the forge or smithy”[1]

The townland of Cornacartan is located in the Civil Parish of Killererin in the Barony of Dunmore. The townland is bordered on the north by the parish of Tuam, on the west by the townland of Castlemoyle, on the east by Clooncunra and on the south by Curskeaghbeg and Curskeaghmore. The Down Survey 1656-1658 records the townland as ‘Owlter’. In Cornacartan in 1641, the owner is listed as the Bishop of Tuam[2].

According to O’Donovan’s Field Name Books 1830, early reference is made to ‘Curnacarton’ in the Boundary Survey Sketch Maps. Reference is also made to ‘Curnacarton’ in the Map of Property Surveyed between 1813 and 1814. The townland is described as the property of H.R. Henry, England and a member of the Henry family of Toghermore. It contained 109¾ acres including about 50 acres of bog[3]. The Ordnance Survey (OS) Maps (1837-1842) shows a corn mill and a kiln close to the river. The settlement of houses in this townland was called a ‘Clachan’, which was a cluster of houses located close together, located in the direction coming from the Corskeahbeg area leading to Hillswood townland. Adjoining each house there was a small plot of land[4].

There were 9 occupants listed in the Griffith’s Valuation in Cornacartan in 1855. All of the tenants leased their land from Hugh Henry. Francis Moggan leased the largest plot containing a house, out-offices and corn-mill amounting to 74 acres, 2 roods and 26 perches. He also leased a further 3 acres 0 roods and 11 perches. The other tenants leased the remaining land and they were Catherine Hughes, James Gormley, Michael Gormley, John Qualter, Thomas Mangan, Bartholomew Joyce, Thomas Screen and Simon Qualter.

There were 9 families with 50 people living in Cornacartan in 1891.

In the 1901 Census, Cornacartan had a spelling of “Cornacarta”. There were 46 people and 9 heads of household listed in Cornacartan in the 1901 census.

The heads of family included Margaret Shaughnessy aged 55 who lived with her sons Thomas, aged 29 and Denis, aged 28.

John Hynes aged 80 was married to Bridget aged 71.  They lived with their son Thomas aged 33 and daughter-in-law Ellen also aged 33.  Their grandchildren, John aged 4, Mary Delia aged 3 and Kate 6 months lived with them.

James Mannion aged 62 lived with his son, Thomas aged 28 and his niece, Bridget Gilmore aged 33, who was a seamstress.

Mark Ruane 70 lived with his wife Mary also aged 70.  Their son Patrick aged 30 and daughter-in-law Ellen aged 22 lived with them as did their grandaughter Mary aged 9 months.

Patrick Donohoe aged 55, head of the household was single. Kate Mitchell aged 50 years also lived in this house. There is no information as to what connection these 2 people had or if they were related in any way, but later in the 1911 Census, Kate Mitchell is recorded as being Patrick Donohoe’s cousin.

Oldest person in townland in 1901

The oldest person living in the townland in 1901 was John Hynes aged 80. He lived with his wife Bridget aged 71 years. The Molloy name listed above was the result of Bridget (Rabbitte) Ballyglunin, having married a second time. Her first husband died as a young man and he was a member of the Qualter family from the townland. She had at least 1 child from this marriage and his name was Richard Qualter. Richard later married Sarah Duggan from Tygreenane.  Sarah Duggan had been married to Nicholas Kemple from Imanemore and he died as a young man. (The spelling of the ‘Qualter’ name changed to McWalter through the years). The Qualter name is listed in Griffith’s Valuation 1855.[10]

There is a change in the spelling of the townland name from ‘Cornacarta’ in the 1901 census to ‘Cornacarton’ in the 1911 census. There were 40 people and 7 houses listed in the townland in 1911. The heads of household were Margaret Shaughnessy aged 74 and a widow.  She lived with her son Thomas aged 40, daughter-in-law Mary aged 30 and 3 grandaughters’ Margaret aged 4, Mary aged 3 and Delia aged 1.

James Mannion, aged 65 was a widower.  He lived with his son, Thomas aged 30, his niece, Bridget Gilmore aged 45 and Peter Monaghan aged 12, who was a boarder in this household.

Patrick Geoghegan aged 65, lived with his wife, Sarah aged 67. They were married for 30 years and had 7 children with 7 still living in 1911. They lived with their sons Richard aged 21, Martin aged 19 and daughters’ Sarah aged 24, Margaret aged 16 and Nellie 13.

Julia Gormelly was aged 79 and a widow. She lived with her son William aged 38 and Patrick aged 40. Patrick was married to Mary aged 28 and they had 2 children, William aged 2 and Mary Delia, aged 4 months.

Oldest person in townland in 1911

The oldest person in the townland at this time was Mark Ruane aged 84 years old and the youngest person was Mary Delia Gormelly aged 4 months old. It is interesting to note that many of the older people could not read or write.

The graph below shows the changes in population in this townland between 1841 and 2006 according to census information[13]. 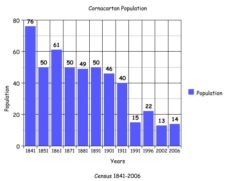