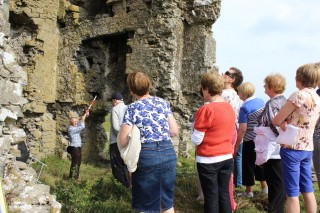 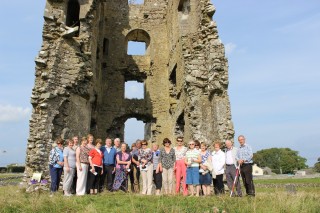 Killererin Heritage Society hosted a Hedge School event at Barnaderg Castle on Saturday 13th September facilitated by Christy Cunniffe, Field Monument Advisor to Galway Co. Council.   It was a very informative and entertaining day and as one individual said later, after listening to Christy, you could really visualise how people lived and what their lives were like in the Castle.

Basking in glorious sunshine, on an unseasonably hot day in September, Christy took us on a tour around all corners of the castle and lived up to his promise “to walk and talk”. He pointed out evidence of 15th century living in the castle although the history books record it only as far back as the 16th century.

Evidence of improvements to the Castle

He showed us the evidence of work and improvements to the castle at different times down through the centuries and pointed out evidence to suggest that the people who lived there were obviously well off.

Sylvester Cassidy, former principal of Barnaderg National School, and heritage society member, brought along pieces of pottery and glass that he had found on the land surrounding the castle. These had been verified and some of them came from Devon in England. The wine/port bottles seem to have come from abroad too so the residents of the castle were indeed from High Society. These pottery shards and glass are in safe keeping in Barnaderg N.S. at present.

The castle was built by Meloughlin O’Kelly and still stands strong today although it is said that many of the corner stones were removed to build Moyne Park which was at one time a seminary and the spiral staircase was also removed.

We also took the opportunity to visit a ring fort on adjacent land belonging to the Raftery family. As they had no idea about the ring fort, they were delighted with the opportunity to avail of Christy’s expertise. This proved to be very enlightening as Christy pointed out what type of ring fort it was and was able to read the landscape and impart his knowledge to all those present.

Indeed, he is almost certain that there is a children’s’ burial ground there, a fact which was heretofore unknown.  Killererin Heritage Society intend to explore this further and with Christy Cunniffe’s assistance, prove the truth or otherwise of this statement.

We had intended to visit land on the other side of the castle also belonging to John Gormally where there is evidence of a souterrain (underground structure) which it is rumoured may have run to the castle but time was against us and we left this for another day.   However, our field and monument advisor discounts this theory and we will explore it again at some future date.

Sincere thanks to all three landowners who gave their permission for us to enter their land, Michael Monaghan, on whose land the castle stands and adjacent farmers Michael John and Mary Raftery and John Gormally.Thanks also to Heritage Officer, Marie Mannion of Galway Co. Council who made contact with Christy Cunniffe on our behalf.