You are here: Home>Places>Hillsbrook Demesne, 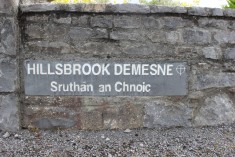 The townland of Hillsbrook Demesne is in the east central part of the Civil Parish of Killererin in the barony of Clare. The townland is bordered on the north by Teegreenaun (Tygreenane) and Derrybaun; on the west by Cottage and Knock;, on the south by Forty Acres, Twenty Acres and Lissavalley and on the east by the Barony of Tiaquin and the parish of Moylough. 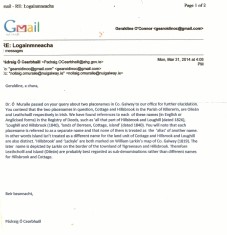 Another reference is cited by an authoritative source to the spelling of ‘Hillsbrook’ by Conor Warde (Steward).[5]  The townland is described as the property of J. Kerwan, Esq., containing 415 acres of land including about 65 acres of bog and about 8 acres of planting.  Hillsbrook House is situated in the south end of this townland.  This was the home of a branch of the Kerwans of Cregg, which would have been in the first half of the 19th century.  Henry Campbell occupied it at the time of Griffith’s Valuation.[6]

John A. Kirwan owned all of the land in the townland of Hillsbrook in 1855.  Henry Campbell leased a house, out offices and a labourer’s house and 146 acres 1 rood 32 perches of land.  This was the largest amount of land leased in the townland.  This may have been the Hillsbrook Estate (Hillsbrook House) at the time.  The next largest amount of land leased was to John Donnellan, which contained a house, out offices, labourers’ houses and 100 acres 0 roods 34 perches of land.  This was the area known as ‘Prospect’ later on to be owned by the Lynskey Household.  The names of tenants listed in Hillsbrook townland in 1855, were Patrick Hanley, John Burke, Peter Fleming, Thomas Fleming, James Murray, Patrick Fleming, Michael Nestor, Edward Naughton, Thomas Stone, Thomas Rooney, Patrick Connell, Connor Ward and John Shaughnessey all leased 10 acres 2 roods 36 perches of bog.

The heads of house recorded were: Joseph Delany aged 24 years, a farmer and single.

Maria Rooney head of the family, a seamstress aged 22 years and single.  Living in the same household were her brother Thomas aged 21 years, single and a farmer; her sister Margaret aged 16 years, and her other sister Katie aged 12 years.  Frances Gready aged 20 years, was a farm servant also living in this household.

James Connell was the head of the family, a farmer aged 53 years and married to Catherine (nee Burke, Cloondahamper) aged 54 years.  Also living with them was their son James aged 16 years.

Martin Mitchell head of the family, was a widower aged 60 years and a farmer.  He had his 2 sons living with him, Michael aged 19 years and Peter 17 years.

John Burke was the head of the family, a widower aged 66 years, and a farmer. Also living in this household was his son-in-law William Murray aged 40, who was listed as a farmer and a mason.  He was married to Mary (Burke) aged 30 years. His grandchildren: Andrew aged 7, John aged 5, Mary aged 3, Patrick aged 1 and William aged 6 months also resided with him.

Thomas Fleming was the head of the family aged 50 years, a farmer, and married to Margaret aged 40. Also living in the household were his two daughters, Margaret aged 16 and Mary Ellen aged 4 and four sons, Martin aged 14, Thomas aged 13, John aged 10 and Patrick aged 8 years.

James Murray was the head of the household and he was a widower aged 83 years. Living with him was his son Michael aged 40, daughter-in-law Bridget aged 35 and 7 grandchildren: Bridget aged 16, Patrick aged 15, Mary aged 12, Kate aged 10, Ellen aged 8, John aged 7 and Thomas aged 5 years.

William Burke was the head of his household aged 59 years and married to Mary aged 59. Also living in the household were his daughter Mary A. aged 24 and his son William aged 18.

Patrick Fleming was the head of the family.  He was a farmer aged 45 years and married to Bridget, aged 45 years.  Also living in the household was his sister Catherine aged 43 who was listed as single and a farm servant.  There were also his two sons, Martin aged 9 and Thomas aged 4 and 2 daughters Mary aged 7 and Kate aged 3 years.

Patrick Naughton was the head of the household aged 50 years and married to Bridget aged 40 years.  They had 4 children living with them, Edward aged 8, Mary aged 6 , Patrick aged 4 and Ellen aged 1 year old.

Michael Gannon was the head of the household aged 80 years and married to Ellen aged 65 years.  Living with them was their daughter Bridget aged 25.

John Fleming was the head of the family aged 50 years and married to Mary also aged 50.  Living with them were their 2 sons Thomas aged 20 and Peter aged 13.

Patrick Donlon was the head of the household aged 30 and was married to Mary, also aged 30 years. Living with them were their 2 sons John aged 3 and James aged 4 months.  Also listed as living in this household was Patrick’s sister Honor Donlon aged 30, a seamstress and Michael Kane aged 9 years.

John Ward was the head of the family aged 35 years and single.  Living with him was his brother Patrick aged 33 and single and his sister Delia aged 30 and also single.

William Lynskey was the head of the household.  He was aged 65 years and he came from Co. Mayo.  He was married to Margaret aged 64. Living with them were their 3 sons: John aged 27, Patrick aged 26 and William aged 23 and a daughter Delia aged 20 years.

The occupation of each family was listed as farmers, with the largest areas of land held by the O’Brien and Lynskey families. They would, at different times of the year, provide varied types of work on the land for local farmers.

Catherine Connell was 71, a widow, and head of household.  Her son, Patrick 34, also lived with her.

Henry O’Brien, age 46 and head of household lived with his wife, Honoria aged 50.  They were married for 19 years and had 1 child.  Also living with them was a stepson, Peter Greaney age 25 and step-daughter Delia Mary, age 22.  Thomas Monaghan aged 36, was recorded as a farm servant and also resided in this household.  He is recorded as being married for 3 years with 1 child.

John Fleming aged 68 and head of household, lived with his wife Mary aged 69. They were married for 31 years and had 2 children with 2 still living in 1911.  Their sons, Thomas 31 and Peter 28 lived with them.

Michael Stones aged 35 and head of household lived with his wife Mary 26, their baby daughter, Mary K. and his sister Margaret, 28.

Bridget Naughton aged 53 and head of household, was a widow. She lived with her sons, Edward aged 18, Patrick aged 14, daughters, Mary aged 15 and Ellie aged 11 years of age.

Michael Murray aged 62 and head of household lived with his wife Bridget aged 50.  They lived with their daughters, Bridget 26, Ellen 19 and sons, John 17 and Thomas 15.

Mary Burke aged 72, was head of household and a widow. She lived with her daughter Mary Ann, aged 35 and her son, John aged 34.

Bridget Hanly aged 80, was head of household and lived with her daughter, Mary Byrne aged 42, grandson, Patrick 16 and granddaughter Mary Ellen 7. Mary Byrne is recorded as being married for 18 years, had 4 children with 3 still living in 1911.

Martin Mitchell aged 70, was recorded as head of household and a widow.

The ruins of this house can be seen in the field on the left after the crossroads as you are going to Hillsbrook village, at the back of the older Cunningham house. It was known as ‘Thomasin’s’.  The Rooney family went to live in America and did return to renovate the house at one time, which they never lived in, and they returned to America.

Patrick Ward aged 45, was head of household. He lived with his sister, Delia age 49 who was also single.

Margaret Lynskey aged 73 was head of household.  Margaret lived with her daughter, Delia 41, her son John 38 and Patrick 37 all recorded as single.

John Walsh aged 35 was single. He was born in Mayo and is recorded as an agricultural labourer. He lived in a 3rd class house and it could have been on land owned by Margaret Lynskey as her name was entered as the landholder and then crossed out in the census.

The Place and People[14] Griffith’s Valuation

Looking back at Griffith’s Valuation 1855, some names have remained to the present day.  The family name ‘Stones’ (Stone) is a name that continues to remain in the village, as do the Fleming descendants.  The Connell name only disappeared through marriage but the descendants remain and are now the McWalter family.  They still live on the same land today with additional acreage.  The Murray name has disappeared but has direct family connections to the Donnellan family who live in the townland.

There were 2 families that moved to Eyrecourt, Naughtons and Flemings.  Many families from other villages in the parish of Killererin also moved to Eyrecourt and their lands were distributed amongst their neighbours.  The Lynskey household (Prospect) also in the townland, moved to Co. Meath on 22nd April 1955 and their farm was divided into several sections and given to local farmers.  A farm herd who worked for the family, named Jack Fahy from the townland of Twenty Acres, also moved to Co. Meath with the Lynskey family.

Hillsbrook House was demolished and was replaced by a new house, but the old outbuildings remain in reasonable condition and they date back to the time of the landlord John A. Kirwan who lived there.  There is a bust of his head situated high up on the corner of these outbuildings looking out over the estate that he would have owned in the 1850’s. Today, the O’Brien family owns this property.

There was a Connor family who also lived in Hillsbrook in years gone by.  They lived in what was called the ‘cot’ on the right hand side of the road roughly half way as one enters the village. They

were Martin Connor and his wife May Heneghan, who came from Castlegar and they had two sons Frank and Joe. Martin died suddenly and his wife and family went to live in Galway some years later. The older Connor family would have lived in Hillsbrook for many years. A lot of the old houses have gone as have the peo
ple, but new ones have been built in the townland and the population has increased yet again. 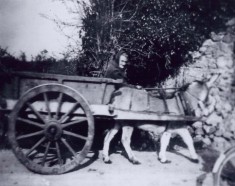 Hillsbrook would have had its characters and one would have been Biddy (Coen)Mitchell. She could be seen driving the ass and cart going for the pension every Friday while she was mobile . She lived with her son Tommy. They are still remembered fondly in 2015 by older members of the community as characters, who could never be replaced. 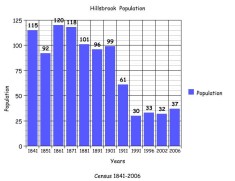 [7] ‘Table VII-Area, Out-offices and Farm Steadings and Population together with the Valuation of Each Parish, Townland and Township of the County of Galway in 1881’ (James Hardiman Library, Nation University of Ireland, Galway, p.21)

[9] Table VII-Area, Out-offices and Farm Steadings and Population together with the Valuation of Each Parish, Townland and Township of the County of Galway in 1881’ (James Hardiman Library, National University of Ireland, Galway, p56) (Jan 2012)

[10]Census of Ireland for the Year 1911[Province of Connaught, County of Galway] Area, Houses and Population, ‘Table VII-Area Houses Outbuildings-Buildings and Farm Steadings, and Population together with the Valuation of Each Poor Law Union, Dispensary District, Electoral Division, Townland in the County of Galway in 1911’ (Galway County Library, p110)