Extract from Townlands chapter in Killererin - A Parish History 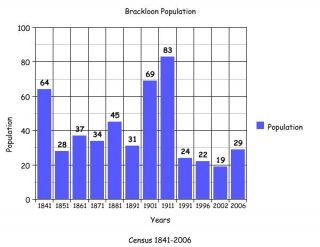 The townland of Brackloon is located in the Civil Parish of Killererin.  The townland is located in the south-west of the parish and is bordered on the north by the townland of Gortbeg, in the south by Brooklodge, in the west by another townland also called Brackloon and in the east by Ballina and Ballynapark. The Down Survey, a mapping survey carried out between 1656 and 1658 records the townland as ‘Doonmoylin’[2]. In Brackloon in 1641, the owners were listed as ‘Richard Bourke (Catholic)’ and in 1670 ‘Ambrose Bodkin (Catholic)’ and there were 53 plantation acres of unprofitable land, 84 plantation acres of profitable land and 84 plantation acres forfeited[3].

According to O’Donovan’s Field Names Books of 1830[4] early references to the townland were given as ‘Bricklon’ and ‘Brackluon’ found in the Chancery Inquisitions of King James I (1603-1625) and ‘Breakloone’ in the Chancery Inquisitions of King Charles 1 (1625-1649)[5]. Mention is also made of ‘Brackloon’ in The Boundary Survey Sketch Maps completed during the field names survey (which began in 1824) and officiated by John O’Donovan (1806-1861) and others[6]also cite Thomas Gilmore, Proprietor’s Tenant as an ‘authority source’ on the established spelling of ‘Brackloon’[7]. The townland is described as ‘the property of Mr. Skerritt, Ballinduff. It contains 83½ acres statute[8] measure, all arable land’[9]. Today, locally, the townland is spelled ‘Brackloon’.

There are 7 occupiers of land listed on Griffith’s Valuation in 1855. All of the landholders leased their land from the Trustees of Dominick D. Skerritt with the exception of Dominick Donnellan who held land leased from both Skerritt and Martin J. Blake, from the former, an area of 22 acres, 3 roods and 25 perches and the latter 4 acres 0 roods and 6 perches.  Patrick Morris also leased land from Blake amounting to 2 acres, 0 roods and 34 perches. During this time Brooklodge, near Ballyglunin, located to the south of Brackloon, was Skerritt property and leased by the Blake’s[12].

Other Lessees of Skerritt Trustees

Land owned by the Skerrit family in the area

In the 1870s the Skerritt family owned 3,733 acres in county Galway[13]. The trustees of Dominick D. Skerritt also owned most of the land in Ballina, Cloonlusk and Gortbeg[14]. The total area of land valued in the townland of Brackloon was 83 acres, 2 roods and 20 perches. The largest holding with a herd’s house, land and offices was held by Dominick Donnellan mentioned above and the smallest holding was held by a Patrick Morris. The total valuation of land was £29 15s. 0d.

There were 31 people living in 7 households in Brackloon in 1891.

There are 69 people recorded on the 1901 Census including the Bane, Burke, Delaney, Mannion, Forde, McNamara, Howley, Kelly, Malia, McCabe, Kelly and Mullen families.

Aged 68, a farmer was married to Bridget aged 56. Michael and Bridget had a son John aged 22, who was a blacksmith.

Aged 52, was married to Margaret aged 45. They lived with their children: Martin aged 12, Ellen aged 17 and Bridget aged 18.

Aged 42 was married to Kate also aged 42.They lived with their children: Julia, aged 10 and Mary aged 4.

Aged 81 was head of the family and lived with his wife Margaret aged 78. There were no other people listed in this house in 1901.

Was head of the family aged 27 and married to Sarah aged 20. There were no other people listed in this house in 1901 either.

Was aged 50 and a widow. She lived with her children: James aged 18 and Patrick aged 16.

Aged 27 was unmarried. John lived with his mother, Margaret aged 60 and his sister, Katie aged 18.

Was aged 78 and a widow. Anne is listed on her own in this house.

The majority of occupations are listed as ‘scholar’ or ‘farmer’ with the exception of Anne Greaney aged 78, a wool spinner; Mary Ellen McHugh aged 23, a national teacher and Michael Bane aged 68 years and his son John aged 22, both blacksmiths. Bane’s Forge is recorded on the out-buildings returns for the townland.

All of the families listed in 1901 had a cowhouse, piggery and fowl-house. The property where John Delaney resided also included a stable.

Oldest and Youngest persons in 1901

In 1901 the oldest person in the townland was Patrick Mannion, a farmer aged 92 years from Co. Galway. Patrick could not read or write. The youngest people in the townland in 1901 were Norah Bane, Joseph Gorman and James Dolan who were not yet 1 year old.

Was married to Norah and lived with their children: Mary aged 18, Michael aged 17, Delia aged 15, Kathleen aged 13, Norah aged 10 and Sabina aged 9. A 19-year old daughter, named Julia, is crossed out of the census returns.  Matt and Norah were married for 21 years and had 8 children with 7 still living in 1911.

Aged 66, was a widow. Bridget lived with her children: Patrick aged 26, Bedelia aged 23 and John aged 30 and her grandchildren: Joe aged 16, Martin aged 14 and Frances aged 15. There are no parents listed for the grandchildren in this census.

Aged 40, was married to Norah aged 43. They lived with their children: Thomas aged 8, John aged 6, Bernard aged 4 and Patrick aged 1. Margaret Delaney aged 73, who was John’s mother, also lived in this house. John and Norah were married for 10 years and had 4 children with 4 still living in 1911.

Was married to Margaret aged 65. They lived with their children: Bridget aged 30, Ellie aged 27, Catherine aged 25 and Martin aged 23. Patrick and Margaret were married for 30 years and had 4 children with 4 still living in 1911.

A widow, is listed as living alone on the census, aged 78.

Aged 87 was also a widow. She lived with her family: daughter-in-law Delia Gorman aged 50 and grandchildren: Patrick aged 20 and Joseph aged 10. Delia Gorman was married 27 years and had 7 children with 7 still living in 1911.

Aged 40 was married to Mary aged 30. They lived with their children: Michael aged 9, Patrick aged 7, Martin aged 3 and Mary aged 1. James’ sister-in-law Nora aged 23 and James’ nephew, Michael Farragher were also listed in this house. James and Mary were married for 10 years and had 4 children with 4 still living in 1911.

Aged 53 was married to Bridget also aged 53. They lived with their children: Mary Bridget Whitman aged 22, William Walsh aged 17 and Michael Walsh aged 13. William’s grandaughter, Mary aged 1 was also listed in this house. William and Bridget were married for 23 years and had 7 children with 6 still living in

As in 1901, farming as an occupation is reflected in the number and type of out-buildings listed by the enumerator including cowhouses, piggeries and sheds. The Bane’s forge is not listed on the 1911 census as it was in 1901. Outside of farming, other occupations recorded included Andrew Mullin and William Walsh listed as postmen.

Oldest and Youngest persons in 1911

The oldest person in the townland was Mary McNamara aged 87 and the youngest were Nora Dolan and Michael Farragher who were less than 1 year old.

The bar graph accompanying this article plots the changes in population in this townland between 1841 and 2006 according to census information.[19]

A comparison between the OS 25 inch Map produced 1888-1913[20] and the OS Aerial map 2005, gives a good indication of the changes in the landscape and geography of the townland. The early map shows the townland divided between two parishes, Killererin and Kilmoylan. The Killererin portion of the townland is a long, narrow strip of land with a small forested area in the south. A small area to the southwest of this was recorded as liable to flooding. In the northeast, a lime kiln was in operation and a number of others were recorded on the border with the large neighbouring townland of Ballina. A forge was also recorded on the border here too.

According to the later 2005 Arial Map some minor changes have taken place in the landscape. In the southwest of the townland, a quarry works has been developed and seems to straddle both parishes. Between 2000 and 2005 an extensive amount of work had taken place at this site and an extension of the quarry works had also taken place in its south-western edge into Kilmoylan. Much of the land in this townland has been retained as farmland.