Taken from Killererin - A Parish History, published in 2015 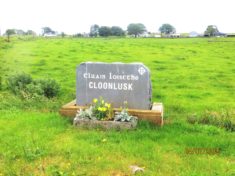 According to P.W. Joyce’s, Place Names, the ‘burnt pasture’ probably refers to the practice of burning the land for agricultural purposes, ‘for instance, when heath was burnt to encourage the growth of grass’[4]. In O’Donovan’s Field Name Books 1830,[5] early references to ‘Clownlosky’ and ‘Clonneloske’ are found in the Chancery Inquisitions of King James I (1603-1625). ‘Cloonlusk’ is also referred to in Larkin’s County Map of Galway 1819 and ‘Cloonlusk’ in the Boundary Survey Sketch Maps[6]. The Survey also cites an ‘authority source’ on the spelling of the townland as ‘Cloonlusk’, supplied by Thomas Gilmore, who was a Proprietor’s Tenant. The 1911 Census of Ireland records the spelling of the townland as ‘Clodulusk’. Today, locally, the townland is spelled ‘Cloonlusk’.

The townland is described as the property of Mr. John Skerrett[7], Ballinduff, ‘containing 339 acres statute measure[8], including about ‘180 acres of bog’[9]. Skerrett also owned lands in Gortbeg, Ballina and Brackloon.

There were 12 households and 80 people living in Cloonlusk in 1841. These 12 households continued to be inhabited up to 1851 though the population decreased by that time to 67 people. The total area of land in the townland was 339 acres, 0 roods and 36 perches with an annual valuation of £45 10s 0d.

There were 19 occupants listed on 5 plots in Griffith’s Valuation in Cloonlusk in 1855. All of the tenants leased their land from Martin J. Blake. He also retained 132 acres, 2 roods and 9 perches of bog for himself, at an annual valuation of 10s 0d.

There were 14 households and 67 people living in Cloonlusk in 1891.

There were 62 people listed in Cloonlusk in the 1901 census.

Edward Curley aged 70 was married to Bridget aged 60. There is no record of any other occupier of this house.

Patrick Lynskey was a widower aged 98. There is no record of any other occupant in this house.

Catherine Glynn was a widow aged 48. Catherine lived with her children: Bridget aged 12 and Thomas aged 9.

Patrick Curley was a widower aged 60. There is no record of any other occupier in this home.

Catherine Glynn lived in a 3rd class house, while the other occupiers lived in 2nd class houses. There were no 1st class houses in the townland in 1901. All of the households with the exception of Patrick Lynskey, Pat Curley and Michael Furey had a stable, 11 households had a piggery, 7 had a cowhouse, 3 had a calf-house, and 1 house, that of John Tierney, had a fowl-house and barn. John Tierney, probably a descendant of the Peter Tierney listed in Griffith’s Valuation above, had 7 out-buildings in total, the largest number in the townland. John McDonnell listed a workshop as part of his out-buildings.

All householders list their occupations as ‘scholar’ or ‘farmer’ with the exception of John McDonnell and his son, also John, who were carpenters. The McDonnells had listed a workshop as one of their out-buildings, mentioned above. Michael Furey, aged 85 listed his occupation as ‘farm labourer’.

Oldest person in townland in 1901

There were 41 people or 9 heads of households listed in the townland in 1911. The census of this year refers to the spelling as ‘Clodulusk’ and was therefore difficult to locate using the current spelling. It may be that the Anglicisation of a place name or the phonetic spelling of a name may have changed the spelling over time.

Michael Reilly aged 58 was married to Bridget aged 66. They lived with their daughter Margaret aged 24.

Margaret Curley was a widow aged 40. Margaret lived with her son Patrick aged 7. Ellen Higgins aged 13, also lived in this home and worked as a servant.

Lawrence Reynolds aged 55 was married to Mary aged 56. They lived with their children: Lawrence aged 17, Martin aged 16 and Anne aged 11.

James Curley aged 35 was married to Annie aged 35. They lived with their children: Patrick aged 7, Bridget aged 4 and Mary aged 1.

Type of houses lived in

All households had a piggery and nearly all listed a fowl-house and stable in their out-buildings. John Tierney also listed a coach-house the only one in the townland. John McDonnell senior again recorded his carpentry workshop in the list of out-buildings. By 1911, his son John, also a carpenter had moved into another house with his brother Thomas. John was listed as the head of household. While John could not read, his brother Thomas, an agricultural labourer was recorded as being able to read and write.

The bar graph below plots the changes in population in this townland between 1841 and 2006 according to census information[17]. 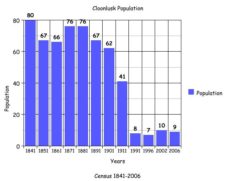 The Ordnance Survey (OS) maps 1837-1842[18] show ecclesiastical remains and a graveyard in the east of the townland and a ringfort situated in the southeast. At the northern end of the townland just off the road, a gravel pit was located on the left-hand-side[19]. Also in the north, a river ran creating a natural border with the neighbouring townlands. A 7-arch bridge built in approximately 1740 that still exists today was located not far from this location[20]. A large area of this land encompassing northern Cloonlusk and Cahergal was liable to flooding and a sizeable flood plain was mapped at this location.

A comparison between the 25 inch map 1888-1913 and the Aerial map 2005 shows how the landscape and geography of the area has changed in the intervening years. The 25 inch map again shows Cloonlusk Fort and Graveyard in the east of the townland. Just outside the graveyard, a spring was located. This spring was not shown on the earlier 6 inch map (1837-1842).  Further south a smaller ringfort existed.

Only one road led into Cloonlusk

Only one road led into Cloonlusk from the direction of Cahergal Bridge and provided access for 16 dwellings and buildings. Within this line of buildings 2 wells were situated at the north-eastern edge of the road. According to the map, the farmed land was divided into small plots and this was reflected in Griffith’s Valuation mentioned earlier. All of these small plots were adjacent to the dwellings and with the larger plots situated behind them, took up the entire central area of the townland. This central area was ringed by bog or uncultivated ground demarcating the outer edges of Cloonlusk from its neighbours.

In 2006, only 3 dwellings remained. It appears from the Aerial map 2000 that 2 farms are located where previously over a dozen houses existed. By 2005, a new house had been built along the north western road. The area is still surrounded by uncultivated ground and trees. The old fort and graveyard are still visible though the smaller fort to the south has all but disappeared and is not visible on the 2005 map. The small sub-divisions of land have been amalgamated and in 2005 some of this land was cut for hay or silage. A main road now runs along the north west of the townland leading in a south westerly direction across the old Tuam-Athenry Railway and in a north easterly direction towards Barbersfort.