You are here: Home>Topics>Events>Annual Heritage tour 2018

A day to remember

Tour of sites in Mayo

We had allowed 3 1/2 hours for our time in the National Museum in Turlough, ncluding lunch, and were a little worried that it might be too much.  Fortunately this proved not to be the case.  In fact, we could have spent longer.

A Museum for the people

The National Museum of Ireland is a hidden gem an hour’s drive from Barnaderg, located just outside Castlebar. There were several exhibitions to view spread over four floors.  We were greeted by very friendly staff and then left to our own devices to browse the various exhibits. This is a museum for the people and I was intrigued to see some signs urging people to please touch instead of the reverse which is the norm.  There was no limit to the photographs we could take.  All in all, it is a very friendly place to bring all the family.

The items on display, were all very familiar items of our childhood and much debate took place over many of the items displayed.  It was a trip down memory lane for most of us.  For the children that accompanied us, it was disbelief that these were the tools and items of our youth.  To them, it was a steep learning curve about the era that their parents grew up in.  The stories recounted on many of the boards were familiar to many of our members, who in turn had their own stories to tell.

Following our tour of the museum, we had a lovely lunch in the restaurant which featured a wide variety of choice and then adjourned outside for fun and games.  The museum has a games box which can be reserved by anybody containing instructions on how to play some of the games we would have played in the past.  It contained items such as skittles, skipping ropes and by far the most popular was the throwing the horse shoe game.  While the children did play some of the games, it was the adults who embraced it fully, particularly throwing the horse shoe.  Everybody had a go but it was the men who became very competitive.  However, no winner was declared!  The children looked on in wry bemusement.

Entry to the museum is free and there is a lift available for anybody that wishes to take it.  If at any stage, you get tired, there are lovely grounds outside to be explored including a lake and also a lovely childrens’ playground too, so they do truly cater for all ages.

Following our stay there, we travelled a short distance to the Michael Davitt Museum in Straide which is another hidden gem and off the beaten track.  It is located in a church built in Penal times.  As our guide explained, during this period, the churches had to be built out of sight in remote places.  From the outside, it may not appear to be much, but once you get inside and meet Paddy who runs the place, you quickly forget all that and are drawn in to the whole experience.  At €3 per person, it is great value.

The Michael Davitt Museum is testatment to what can be achieved in any small community with hard work and voluntary effort.  They receive no funding and are entirely dependent on donations.

We began our tour inside the church which had numerous items on display.  Following this, we had a short talk from our guide Paddy, followed by an audiovisual presentation on the life of Michael Davitt.  We then  had a quick tour of the items in the Museum before going outside where Paddy really came to life and  his passion for the project was plain to be seen..

He brought us outside to the grounds of the 13th century Abbey and regaled us with stories about several points of interest including the graves of Michael Davitt and Ann Deane, president of the Ladies Land League who is also buried there.  He also showed us a grave of the Matchstick Man, one of only two in Ireland, the other being in the National Museum.  We spent an hour there and could indeed have spent longer. There is also a sculpture by Padraic Pearse’s brother over a grave there.  It is a very interesting place with lots to see.

Just between the abbey and the neighbouring church is a war memorial dedicated to the memory of everybody from the locality on all sides who lost their lives in all wars, fighting for their beliefs.  Well done to the people of Straide.

We then went on to Foxford, another short journey to our destination – Foxford Woollen Mills.

There we were greeted by our guide, who gave a very informative talk on the process involved in making the rugs, scarves and other woollen products sold by the Mill.  We then enjoyed an audiovisual presentation on how the products at the Mill are made following which we were introduced to the factory floor.  Our tour of the factory was brief as the machines don’t work at the weekends but tours are held midweek when the machines are working and you can also then see the finishing shed.  Our guide was very informative and after seeing what is involved in the making of their famous rugs and the length of time it takes to finish them to their exacting standards, one can really appreciate the highl cost of the rugs etc.

Following our tour, we then retired to the very impressive shop which houses a wide variety of objects, all Irish made from items made in the Mill such as scarves, rugs, bed linen etc. to delph, leather goods and much more besides.  The shop caters for everybody and most people came home home with something.

We then came back to Sheridan’s  in Milltown and enjoyed a beautiful meal where the proprietor and staff were very friendly and couldn’t do enough for us.  There was plenty of everything and everybody enjoyed their meal.  We all returned home tired but happy and are already looking forward to next year. 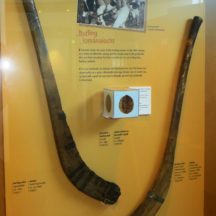 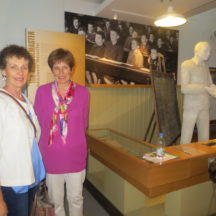 Back to School, Helen Treacy and Bridie Keane
Photo: B. Forde 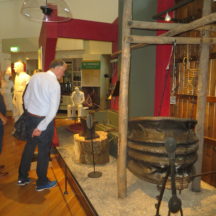 Miko Keane and Mattie Cunningham admiring the tools of the forge including the big bellows in the forefront.
Photo: B. Forde 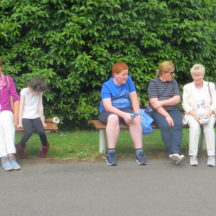 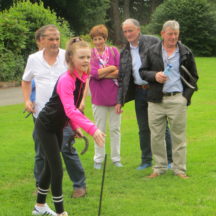 Aoife Butler having a go at the horse-shoe throwing closely watched by Brendan O'Boyle, Bridie and Miko Keane and Michael Treacy
Photo: B. Forde 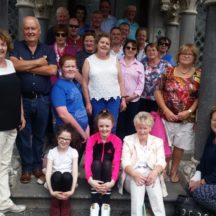 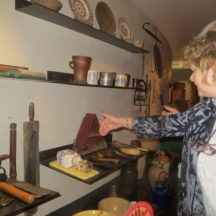 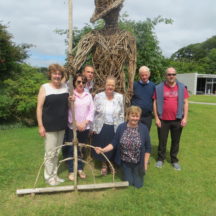 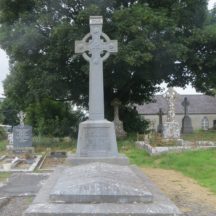 The Grave of Michael Davitt in Straide Abbey
Photo: B. Forde 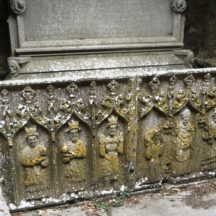 Sculpture on tomb of 7 statues including the three Magi
Photo: B. Forde 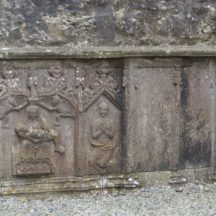 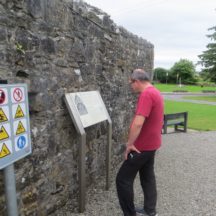 Seamus catching up on some reading
Photo: B. Forde 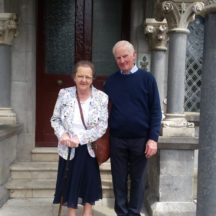 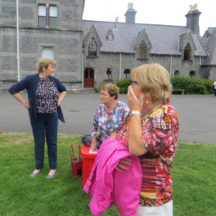 Eileen O'Connell, Mary Cleary and Colette Lynskey in the grounds of the National Museum
Photo: B. Forde 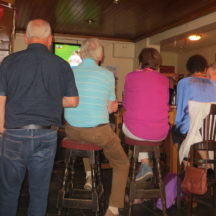 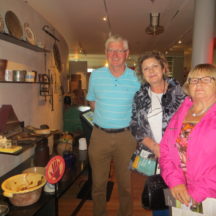 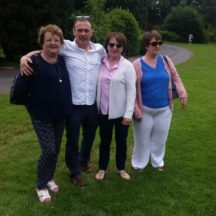 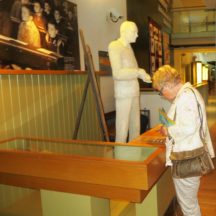 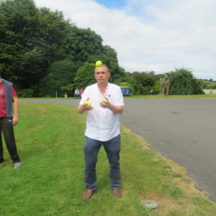 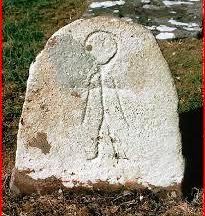