What it said in the papers 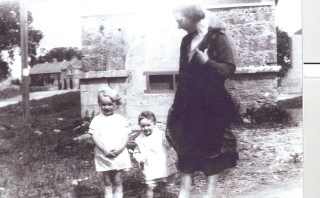 Mrs. McHugh with her two children at Market House

If ever there was doubt that the Market House, Barnaderg (now the grotto as it is today) held a sale of pigs, the notice below from 1840 puts that to rest. The weighbridge, which was used then, can now be seen in the area of the grotto, having been discovered on land close by in recent years.

The Pig Market will commence at BARNADERG on FRIDAY 13th MARCH next.

Mr GRIEVES from GALWAY and several other eminent purchasers will ATTEND
HERE on that day, and every subsequent Friday.

1841
Glenrock (an old barracks located in the village of Barnaderg)

Glenrock to be raffled at Daly’s Hotel, Tuam on the first of March, 1841, at one o’clock, pm.   The leasehold of the property is being sold with a lease term of Nine Hundred Years, from the 4th July, 1839, subject to the Yearly Rent of £6 16s 6d on which has been built a handsome and commodious House, which cost upwards of £1000. The House stands on a Demesne of five acres, and is surrounded by a wall of six feet high. It is situated within 4 miles of Tuam, 5 of Moylough, and the Dublin and Westport Mail and Beacon Cars pass twice a day.

Tickets, (limited to 50) £20 each, half of which are now sold. Should all the tickets not be disposed of before the first of March 1841, the Raffle will be postponed until such further time as they may be all sold.

1844 (A position we will not see required that often for the parish of Killererin but this was 1844).
Notice
WANTED, A TUTOR.
FOR YOUNG BOYS

He must be a “‘Teetotaller,” and will only receive a moderate salary.
Personal application to be made to John Andrew Kirwan, Esq., or Henry Kirwan, Esq., Hillsbrook, Dangan.
24th August 1844.”

On Tuesday last, Mr. John Morris of this town, Poor Rate Collector for Killererin electoral division, proceeded to the village of Poltoo (Polladooey) near Dangan, for the purpose of serving notices. On delivering one of them to a girl who was at the door of the first house in the village, he heard a voice desiring her to scald him, and on going to the other side to ascertain who it was that gave the direction, a man whose name was unknown to him, armed with a hatchet presented himself and warned him against going any further; and, on Mr. Morris stating that he had a duty to discharge and should perform it, and for that purpose was going on, when the man stopped him and swore he would split his skull if he proceeded another step. The Collector, seeing he was becoming greatly excited, prudently returned, when a great number followed him out to the road where he was relating the circumstance to Mr. Gannon, the Post-master at Dangan, and some women that were on the road. They then surrounded him when his former friend of the hatchet, having changed it for a spade, made a violent thrust at him, another struck him with a stick on the head and broke the leaf of his hat, and but for the exertions of the Post-master and the women who dissuaded them from pursuing him, he stated his life would be in imminent danger. His collecting book was taken from him and thrown over the wall but was subsequently recovered by his assistant, who also got a blow which caused him to stagger against the wall inside which he observed the book. Mr. Morris proceeded to Moyne, the residence of Michael J. Browne, Esq., the landlord of the parties, and reported the matter. That excellent gentleman felt most indignant and assured him he would use every effort in his power to bring them to justice.

Fr John McLoughlin, P.P. Killererin sent a report on the Famine conditions in the parish to the Bishop’s ‘Destitute Census’ for their meeting at Loughrea in 1847 that there were 2,188 people in the parish and 772 were actually starving.

Notice
Hillsbrook – The Country Residence of John A. Kirwan, Esq.,
TO BE LET
From the first day of August next, for such terms as may be agreed upon.

The Mansion, and from Ninety to Three Hundred Acres of the Demesne of Hillsbrook, ornamented with Timber and Water; situate in a most personable and most desirable neighbourhood, within 15 miles of the towns of Galway and Ballinasloe, 7 of Mount Bellew and Dunmore, 5 of Tuam and one of Dangan.  The House and Offices are very commodious, and fit for the immediate reception of a numerous and respectable family. The new tenant will keep the crops, consisting of potatoes, wheat, oats, turnips and every species of garden vegetable and also good black turf.  Apply to J.A. Kirwan, Esq., R.M., Boyle; or Mr. Connor Ward, Cottage, Dangan. Hillsbrook, July 29th, 1848.