You are here: Home>People>Interviews>Eddie Ward 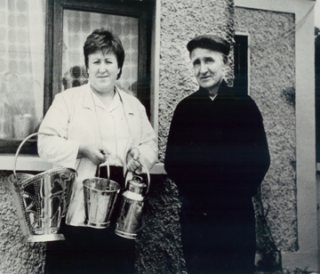 Mary Moriarty with her Dad, Eddie Ward and a sample of his wares.
Bina Devaney 2008

Eddie Ward lived on the roadside on the New Line, Forty Acres, in Killererin with  his wife and family until the early 1960s.  He worked primarily as a Tinsmith and as was the custom among travellers at the time, used to move from place to place for part of the year, selling his wares.   He returned again when all were sold and started making his buckets and lanterns once more.

The family lived in a camp made from canvas, which was held in place with hazel rods or wattles as he would have called them.  He would cut the hazel rods and bend them and when he was ready, he would pull the canvas over it.  If the hazel was of good quality, it could sometimes last up to three years .

Three  generations of his family lived at one time or another on the New Line.  Traditionally, they never moved camp on a Sunday.  He moved to a house in the 1960s with his family.

Eddie Ward was a well known tinsmith in the local community.  He made buckets and repaired kettles and pots.  He also cleaned chimneys.  Farmers often swopped wool or horse hair in return for repairs carried out to buckets etc.

He was most famous for his “Connemara Lantern” which was made from copper and had three windows which gave more light when a candle was placed inside it.  He made these lanterns by hand and decorated them with his own designs.   His name was always to be found at the bottom of the lantern which he had painstakingly worked into the copper  His lanterns were distinctive because of the three windows which was unusual at the time.  A symbol of a cross or chalice was to be seen on most tinsmith’s work, as this was part of their culture, and Eddie was no exception.  He worked with copper, brass or tin.

Once World War 2 was over, the work of the tinsmith went into decline.  The introduction of new materials such as plastic and other newly discovered materials, replaced the old copper and tin buckets.

Eddie visited President Mary Robinson and presented her with one of his lanterns in Áras an Uachtaráin.  She would always light it when Travellers called to meet her.  She also was the President who introduced the “light in the window” to Áras an Uachtaráin so Eddie’s lantern was a very appropriate gift.