You are here: Home>People>Emigration>Emigration to England in the 1960s

Emigration to England in the 1960s

Interview with Mattie and Mary Cunningham for Killererin - A Parish History

Interviewed by Geraldine O'Connor, for Killererin - A Parish History 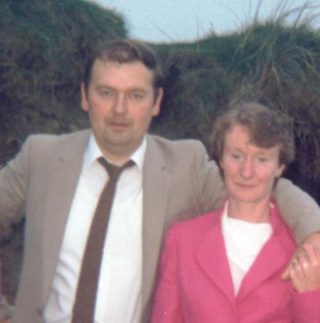 Mattie and Mary emigrate in the 1960s

Emigration to England was very popular in the 1960s. Both Mary and Mattie Cunningham were among a tranche of young Irish people who emigrated to the large cities of England in that era. Families at home in Ireland were large and work was scarce. Free education had not yet raised the qualification levels which gave the next generation a wider choice of opportunity in the workplace. Ireland’s economy was still largely based on agriculture and therefore many young Irish people faced no future at home. They had to emigrate.

With very little education, emigrants were employed as manual labour which was plentiful in England mainly in the construction industry and girls found work in offices and shops, as “clippies” i.e., conductresses on buses. Some qualified nurses found it easy to do post graduate diplomas in midwifery, which were only open to a limited number, in Irish hospitals.  Many youngsters emigrated in the full knowledge that they would never return. Others hoped to earn enough to return and settle in Ireland. Some succeeded very well, others, sadly, failed.

So near and yet so far

England was relatively close to home. However, this was an era when there generally wasn’t a possibility of phoning home. Communication was by letter and a telegram brought news of illnesses or death. Mary remembers that everybody was acutely lonely. The culture was alien and Irish people found it difficult to integrate.

Work was slavish with most men working seven days a week. Brothers and sisters followed each other and whole families left;  elderly parents suffering the loss and loneliness at home. The young emigrants’ aim was to return once a year and they would save to buy furniture or other necessities for the home on that annual visit. Financial support was sent home to families just as it had been since post-famine emigration to the USA, Canada and Australia.

The only opportunity for a social life was on a Friday or Saturday night in the big dance halls such as “The Emerald” or “The Crown” in London. Alcohol was abused and self-care was limited in many cases where life was hard and rough. The Irish tend to be ………… as often happened with emigrant groups. Many married and started family life in their new homeland. This loosened the ties with Ireland but left people with a fractured sense of place. Irish centres were set up in many of the large cities and provided a cultural meeting place for a community making their home abroad.

Many emigrants did not successfully adjust and when they were no longer able to work, their situation became pitiful. Mary and Mattie feel that English society did not embrace such people and poverty, isolation together with old age and illnesses was very apparent to them among some Irish people when they visited London in recent years.

The pull of home is strong

Those who could return were very lucky and found greater life-changes on their return. Many who settled permanently in England still considered themselves Irish after half a century. Modern communication systems and cheap air travel have made the world very small and England nowadays is just a “hop and a skip” away. The annual trip on the Holyhead boat is no more but Mary says, “Distance doesn’t matter, it is still hard to be away”. The pull of place and ancestry is powerful.

For further information on this topic, see the RTE documentary on life for Irish emigrants in Britain in 1966: