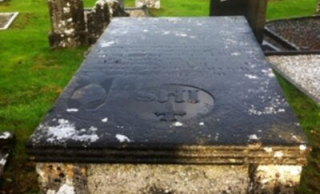 Killererin Heritage Society was inspired to digitally record our graveyards during the compilation of our parish history. During that time, it became apparent that much of our history was intertwined with the people buried in our graveyards. The journey has been a compelling and enlightening experience.

There are three graveyards in our parish, known locally as the Old Cemetery, the New Cemetery and Creevaghbawn (a Monastic site) dating back to the 14th century.  For Heritage week this year, we will not be hosting a public event, due to the global pandemic known as Covid 19 which has affected everyone we know.

Instead, we have submitted the attached video project to the Heritage Council which we are showcasing on their site and of course on our own website, focusing on the Old Cemetery.

The earliest recorded memorial is of Patrick Scharry who died on November 17th 1706 aged 55. The headstones in our cemetery come in many guises from the simple unmarked stones to elaborate Celtic crosses and tombs of all shapes and sizes. We know too that there are many with no marker at all.

Many tales to tell

There are many interesting and poignant stories on the headstones such as the following which feature in our video: the Bohan family from Brierfield who lost three sons between 1st July, 1982 and 14th August, 1986, Edward aged 37; Martin aged 27 and Michael aged 42. Also the story of MP Thomas Higgins who was Justice of the Peace, President of the Executive of the United Irish League and died just one day after being elected to Westminster Parliament. There are many family names that live on in the parish but many that have died out too.

Maintenance of our graveyards

The local community have formed a new committee this year to maintain our old cemetery led by Billy Joyce and are doing sterling work.  It is only fitting that those that all those buried there are giving a fitting final resting place.  We will leave the last word to Miles Kirwan on whose tomb is inscribed: