Interviewed by Nena Nicholson for Killererin Young at Heart in 1998 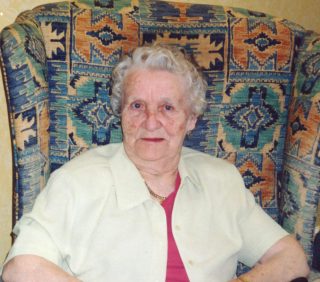 To pass the time they carried out crafts; mostly knitting and crochet. A spinning wheel was in the kitchen with bags of wool to make thread for knitting. They crocheted caps, quilts, scarves and collar cuffs. They patched and sewed their own trousers and darned their socks.

The local doctor, Dr Joyce, was paid with cash. Hot milk, salt and pepper, no drugs then; they made their own potions and there were no antibiotics in those days.

Pain – If a person had a pain they put a lid or iron in a blanket, put it on the pain and it removed the pain.

Common cold – Oatmeal boiled in buttermilk was good for a cold.

Pox – The 7th son of a 7th son was supposed to have a cure for the pox.

Pregnancy – When pregnant the midwife would call out. The husband would have to cycle to the midwife’s house. Grandparents would be there to help.

Margaret remembers that a basket of eggs would buy groceries and there would still be some change left over. Gannon’s was a shop in Tuam; they would come to the house once a week.

They would get nice cakes in Galway for Christmas and parties. She remembers Christmas was wonderful; the family would attend and eat special foods and drinks. They had parties in the harvest time with music and dancing.

Their house was the first to have a radio. It would be full on Sunday with people coming in to listen to the football matches. She also remembers the first gramophone; it was exciting.

On St Stephen’s night there was a big dance until 4 in the morning; they found it hard to walk in high heels.

Going to Mass and the Stations

They went to mass in a side-car. The 1st mass was at 7.30 and there were 3 masses on Sunday. They had to fast going to mass from the night before. The stations were every 6 months. There were 14 houses in the village which they would whitewash and paint.

Margaret enjoyed going to school and was lonesome leaving school. She had to walk a mile to school. There weren’t many books; they read the barometer, sewed and made bags. As part of a game they would take turnips from the fields.

They had to bring a sod of turf to school for the fires as there were only open fires in the school. Discipline was strict in the school; there was a cane. Teachers were highly respected and they had to look up to them. .