You are here: Home>People>Nora Williams' Stories - Tales From the Past>Years Ago 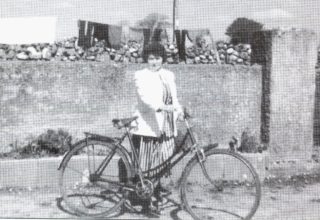 Years ago, money was very hard to get, so my boys used to help farmers with various jobs – flocking sheep and bringing home cows.  They always got a few shillings which was most welcome, so they were never short of money in their pockets.

They were also very skilful when it came to making things.  I remember the first bicycle they made – they found a frame of a bike nearby – someone else had a couple of wheels – hey presto! they now had their very own bike.

Nothing would do them then, only go for a spin and they took off to Moyne House, nearby, where they found a big tree full of beautiful grapes.  In they went and there the caretaker of the Big House spotted them and reported them to the owner.  The bike was confiscated of course and they were to appear in Court the next Saturday.

Now, they had to walk home.  As they passed a thatched house, they saw an ass and cart tied up outside and my boys of course being full of devilment devised a plan.  Knowing the door was never locked and the owner fond of the drink, they took the two wheels off the cart and put them inside and then took the rest of the cart plus the ass inside and tied him to the leg of the table.  They gave him a “gool” of hay and he was quite content.

The owner who was quite fond of the drink had earlier that day jumped into the first car that came along and gone to Abbeyknockmoy for a bit of a booze-up.  He must have got quite a shock on his return to find an ass in his kitchen.

Running away to England

Well, the lads were not prepared to stay around for the day in court which was set for the following Saturday.  Oliver said “No way” – he’d rather go to England.  He asked me to get him up at 3o’clock the next morning.

This time, he had no bike so he decided to use our own ass and cart.  The ass and cart were in a shed beside where the grandparents slept so he crept out and dragged the cart up the boreen.  He then went back for the ass and brought him up the boreen also.  He tackled the ass and put him under the cart and off they went to Ballyglunin train station.  He tied the donkey at the station in Ballyglunin and off he went to Dublin to take the boat to Holyhead.

When he got to England he was very lost so some good person put him up for the night.  Next day, he found shelter in a bombed out house, so he was elected.  He very quickly found a job fixing cars and selling them.  This was no bother to him as he was gifted at this type of work.

Now, the ass and cart was still in Ballyglunin.  The old man (my father in law) got up that morning and went out to the shed, as he had planned to do some work in the morning with the ass.  There was no donkey and no cart either, so  he returned to the kitchen a puzzled man.  He searched everywhere and there was no sign of either the cart or the donkey.

The ass and cart return home

The following day, a man from Ballyglunin spotted the ass and cart and found the owners name written on the cart.  He very kindly brought them both back – the mystery was solved.

My husband Mick, Oliver’s dad had to attend the court the following Saturday and pay the fine – end of story!