You are here: Home>Topics>Food Heritage of our Parish>The Missing Duck 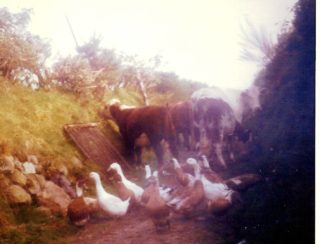 Years ago, people kept half score (ten) ducks and a drake. They ate up all the fluke, slugs and snails in the land.

One day, two of my son’s were sent up for the ducks but of course, nothing would do them but to bring up the fishing rods and a can of worms.

One way of bringing the ducks home

When they went up all the ducks were in the cloche. The ducks kept going from one side to the other and they could not get them out. So, they said they would try and do a bit of fishing instead. So, they put bait on the fishing line and threw it in. Of course, there were no fish in the cloche and what did they catch, but a duck. She started to flutter and was dead in seconds. So, all the other ducks went home with the drake leading the way.

Sent to find the missing duck

Later, I was sent to see where the other duck was. When I found out what happened, I did not spill the beans on them. So, they carried the duck back to the end of the land where there was a crop of potatoes ready for harvesting. They plucked a few feathers here and there so their granddad would think it was a fox that took the duck. They dug a hole in one drill and put in the duck and covered it up.

The duck is found

Next day, they came to lift the potatoes. Out came the duck. So, the following day, the old man went back to look again and said you could not be up to the fox. He never found out!

(Taken from book of Nora’s stories published by Killererin Magazine Committee.  Nora contributed to Out and About in Killererin for over twenty years until her death last year.)