You are here: Home>Topics>Food Heritage of our Parish>Food related extract from interview with Mattie and Kathleen Fleming, Barnaderg 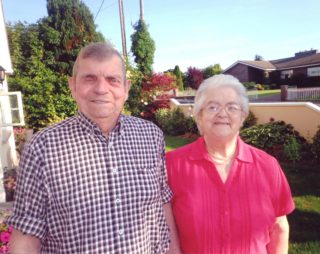 Mattie and Kathleen Fleming, Barnaderg on the occasion of their 60th wedding anniversary
Photo: courtesy of Rita Reddington 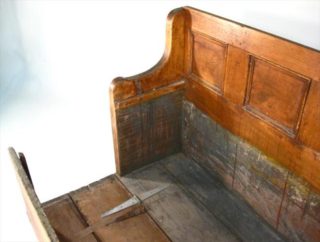 The following article has been put together for our Gastronomy Galway 2018 project. Mattie has passed away since this interview was written.  Most of our interviewees were from a farming background and the common themes throughout are diet, threshing, stations, killing the pig, going to fairs etc. I hope you enjoy reading these extracts and that you get a sense of what life was like for past generations in this locality.

They recall that at that time, houses were mostly thatched, some badly.  Many of the houses had large families in them.  Settle beds were in almost every house.  They were opened up at night and used as a bed when needed and then used as a seat during the day.

Labourers’ wages were very low.  Children were at work when they were about 13 years of age.  They planted potatoes, saved the hay and worked in the bog…………….  Before she moved to Barnaderg, Kathleen used to work in the flax industry…….. Mattie was a great Thatcher.  He also carried out repairs when needed……….

There were a lot of illnesses in those days – tuberculosis, scarlet fever also called scarlatina together with whooping cough and measles. A cure for whooping cough was to bake bread, give crumbs to the goats to eat and any crumbs that dropped on the ground were given to the children. If a child couldn’t eat the crumbs, a fistful of them was put in a cloth and a prayer was said over him or her.

They remember that when you were run-down or very delicate or looked puny, they would go out into the fields and gather herbs in a jug.  They would then steep them in water which became muddy looking and the patient had to drink three spoonfuls a day. It was said to have cured several people…………….

Medicines in those days consisted of Castor Oil, Syrup of Figs, Milk of Magnesia and Cascara etc. The latter was always taken on a Friday evening to clear one out.  Beecham’s Pills were taken for headaches; Cod Liver Oil for constipation and glycerine was used for Thrush,…………..

Each house was practically self-sufficient as they killed a pig which supplied the bacon and rashers for the house.  They reared hens for eggs and the garden supplied the vegetables.  Luxuries consisted of homemade tart and báirín breac and for Christmas, all looked forward to the plum pudding.

Corn was brought to Paddy Farrell’s Mill in Abbeyknockmoy and as a result families would have oats for porridge and wholemeal for brown bread. They would buy flour in a big cloth bag. Mostly all had their own eggs, milk, vegetables, and geese – a speciality on New Year’s Day. Some depended on cheques for beet delivered to Tuam Sugar Factory………….

Stations: (Mass in the houses) in the area were held twice a year. In preparation for them, the house was whitewashed and cleaned thoroughly. When the priest arrived, he heard confessions and celebrated Mass.  He was given a room on his own and was served breakfast consisting of a boiled egg and Hovis brown bread from Hynes’ in Tuam. Butter was made up into little rolls and placed in a butter-dish and currant cake was a luxury. None of the congregation was allowed in the room. In the evening, the neighbours were given a cup of tea when the Stations were over………..

School hours were from 10.00am until 3.00pm and some pupils who attended disliked going. As a result, a lot of mitching occurred……………  activities would include taking apples from Keane’s and Miss Delaney’s orchards.

……………..The reception was held at the bride’s house and both families would go into Tuam to get their photographs taken as there were none taken in the Church.  After this, they would have a few drinks in a pub or a hotel. All the neighbours would be in the bride’s house where ham, cakes and a half-barrel of stout in the corner would be served all evening.  After this, they all would leave and go to the crossroads to meet the bride and groom ………………

Pastimes consisted of Pitch and Toss,,,,,,,,,Hunting rabbits with ferrets was also popular and the rabbits caught were hung on the handlebars of bicycles and sold for 2 shillings and 6 pence a pair. Rabbit meat was popular in most houses.

Storytelling was a great pastime and certain houses were very popular where a mug of tea and smoking a tobacco pipe together with home-made brown bread and card games shortened the long winter nights.

The cattle fair was held on 10th of March in the middle of the square in Tuam all day. All would walk past our house around 12.00 midnight – one person would be in front of the cattle and the other person would be behind. Martin used to walk from Lynskey’s (cousins of Branellys) who later went to Meath, and lived where John Tighe and family now live in Prospect hill.  They used to walk with cattle up to Costelloe’s of Knockdoe and also to near Ballinasloe from Tuam.

There were also pig and sheep fairs held and these were attended well by people from Killererin. At these fairs, there were many attractions including side shows, 3-card trick and trick-o’-the loop.

We had many happy times including Christmas and the Brideógs.  Halloween especially was a happy time with ducking for the apple in a basin and trying to bite an apple swinging from twine tied to the ceiling.

The full interview with Mattie and Kathleen can be read in Out and About in Killererin 2016 which is available for purchase locally.