You are here: Home>Topics>Food Heritage of our Parish>A Recent Famine in Killererin

A Recent Famine in Killererin 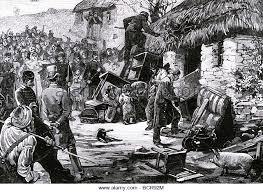 Eviction of family in 1880 watched by the landowner
https://www.google.ie/search?q=eviction+scene+in+1880+in+Ireland

In this year of 2002, the parish of Killererin generously donated €3,270 to Trocaire and, later, a further €1,920 as a response to the recent famine in Southern Africa.  It was a fitting gesture, when one bears in mind the help received by our own people during the last famine to hit this parish, just over one hundred years ago.

The papers of the “Mansion House Relief Fund”, now housed in the Dublin Civic Museum, contain a file of thirty-eight letters from a Killererin committee of the time appealing for urgent help from the Fund to cope with the widespread famine which assailed the West of Ireland in that year.  It is perhaps not well known that, after the awful Famine of ‘Black 1847’, several lesser famines occurred through the 19th century.  The famine of 1880 was particularly severe through a combination of circumstances: the potato crop of 1879 had failed alarmingly, increased rack-rents had started to pauperise or even rendered the peasant farmers homeless, and agricultural prices had fallen through the floor because of the availability of cheap foreign meat imported to Britain and Ireland from America and elsewhere, just then made possible through refrigeration on ships.

Not a Long Time Ago

1880 is not a long time ago.  My late father was three years old at the time and perhaps the parents – or certainly the grandparents – of many of our readers would have survived that famine.  Though no deaths were officially recorded, starvation was very severe and especially widespread throughout the West.  The files of the Mansion House Fund give a frightening picture of how awful this event was.

Eight hundred local or parish committees were set up in early 1880 when the Lord Mayor of Dublin, with the help of the Irish overseas and the help of the main Christian Churches, formed this fund to meet the appeals from all over the country.

The file of the Killererin Branch, listed as Committee No. 326 opens with a form of application for recognition of 3rd February 1880, signed by the parish Priest of the time, Fr. Patrick Waldron, as Chairman, (no relation of the present writer) and John Nolan, as Secretary.  At a meeting in the National School at Barnaderg on 28th January 1800, the local committee was constituted and had formally passed the following resolution:

‘That owing to the widespread destitution prevailing in the parish of Killererin, there being at present fully 200 families in need of relief, that an appeal be made to the ‘Mansion House Committee’, the Land League and the Archbishop and Coadjutor Bishop of Tuam’.

The committee had already on hands a small grant from another relief fund, the ‘Duchess of Marlborough Fund’, but when they had given orders for some meal and bread for 40 very distressed families, they discovered ‘such grave distress in the parish’, they appealed to the new Mansion House Committee.  They stated that 1,000 persons from 200 families were now in need and the number was likely to increase.  The reasons given for the destitution were the loss of the potato crop and the want of employment in England and at home.  As they would not be allowed to distribute cash, they proposed to dole out Indian meal or, if possible, oatmeal.  Indian meal – the hated ‘yallah male’ was well known to provide a basic nutritional diet, though it was highly unpalatable.

Only four days later they could write to Dublin expressing sincere thanks for a grant of £25 as ‘a timely and generous donation’.  However on 6th February they write again to state: ‘there is an amount of distress among small farmers that we were not all aware of hitherto and we are becoming quite appalled at the extent of the destitution which we will have contend against.  Unless large gifts of seed in the way of oats and potatoes are distributed, the land will simply remain unsown’.

The letters of appeal and the returns for moneys spent were almost a weekly occurrence until July – seven months of dreadful hardship and famine.  In mid-February, John Nolan wrote to say that a house-to-house visit had enabled them to discover the extent as well as the intensity of the distress.  ‘Our Parish’, he says, ‘is very particularly circumstances, owing to half the lands have a wet cold and marshy nature and subsequently rotted nearly all the crops in those low-lying areas’.  The people had not the benefit of one pound of wool ‘and, as a result, we know them to be colouring old blankets to make petticoats for their wives and daughters’.  They now had 300 families in distress and ‘if in any one week we stopped, we know not what may be the consequence.  We would at least need £100 at once’.  The present number on the Killererin Relief lists; he said was now 307 families, consisting of 1,611 persons.

The Parish Priest, Fr. Patrick Waldron made a direct appeal to the Lord Mayor of Dublin in a letter of 26th February 1880: ‘if you possibly can, send us at least £100 and when and if any public works start, we will them remove from our lists a great number who are now starving’.

Famine increases in April and May

During April and May, the famine seems to have increased as the remaining potato stocks were depleted.  The detailed breakdown of grants of Indian Meal and oatmeal and bread for the week ending May 1st 1880 show that 235 stone of Indian meal cost the Committee just over £11 and 249 stone of oatmeal cost £22.11.4.  These were distributed generally at one or two stone per family.  Just five families were given aid in the form of bread, which cost the Committee six shillings.  They write to say it is now nearly a month since the committee received a grant of £25.  The claims, they assured Dublin, were bona fide cases.  No public works schemes had yet commenced to relieve the situation.  The number of families in need had grown to 323 families.  On May 9th, John Nolan wrote to say that he hoped the Committee would agree that two stone of meal for fifteen days was not an extravagant allowance to a large family.  Fr. Patrick Waldron, writing on 18th May, said that the Protestant Minister, Rev. Mr. Clarke could bear testimony to the truth that sick people were killing their hens and ducks to keep their families alive.  They had 100 families in three villages where they had not a ‘particle of food in their garden’.  Major Ruttledge of Barbersfort, the Treasurer, in sending back his returns on 1st June 1880, added a four-page letter stating that no relief fund in Ireland was more carefully worked and expended than that of Committee No. 326 (Killererin).  He was horrified to learn that the Mansion House Fund might soon be wound up.  ‘Many families, he says, ‘will simply starve.  If anything, the grant needs to be increased in the next few weeks’.  The most the Committee ever give out is three stone of Indian meal and one stone of oatmeal – this to do a family of 8 to 10 people for a fortnight.  Their committee met every week, usually on Mondays, and the Parish Priest and the Protestant minister always attended.

Certainly, in comparing the Killererin file with several other parish files, one is struck by the lack of questioning by the Dublin committee.  Killererin apparently worked well and sent its returns in a clear transparent fashion.  Other parishes which had two churches had endless correspondence and confusion about boundaries and area sub-committees, raising fears in Dublin that there were double applications, payments, etc.

A donation of £20 was sent to Killererin and receipted on 12th June but a request was made on July 5th for one last remittance as the Committee would have demands made on them until the first week in August.  A final donation of £15 was received on 8th July and in his letter in the file; John Nolan of 26th July sent his final accounts.

The summer of 1880 turned out to be a good one and crops revived.  This, after three bad summers and the consequent famine.  The Mansion House Fund, which had gathered and expended £18,665 in the eight months period of its operation, was eventually wound up in late August 1880.  The efforts of 800 local committees with the generous help of the Dublin fund, the Land League and various smaller relief agencies overseas had prevented many deaths.  Otherwise the scale of deaths could have been the same as had happened in the famine of 1845-1847, thirty years earlier.  The 1880 famine, however, did have an impact in causing a loss of morale among the people and huge new waves of emigration, even government sponsored ‘assisted emigration.’

The papers of the Mansion House Fund had been lost for almost a century.  They were accidentally rediscovered in 1978 when some refurbishment works were taking place – under the wainscot in the Mansion House, where they had been placed by some previous builder to increase insulation.  They are a revealing source of conditions in the Ireland of 1880 when Ireland was in a similar position to countries of the third world, which we are now occasionally asked to help.  How was such a dreadful famine soon forgotten?

Was this famine covered up?

Few people know about it nowadays. Is it likely there was a deliberate cloaking over of those bad times by our grandparents’ generation – almost as a moral evil in a family might be.  Poverty demeans the human spirit and in September 1879, admittedly before this famine, Michael Davitt, the great Land League figure, had warned the Irish people; ‘in vain, shall we try to rouse the national spirit if the men who form the nation are allowed to become paupers before our faces’.  The recurrence of famines throughout the nineteenth century, of course, had dulled their sensibilities.  The famine of 1880 was worse than most other famines certainly but, after all, it was only one of many famines that had hit this ‘neglected country’ until comparatively recent times.