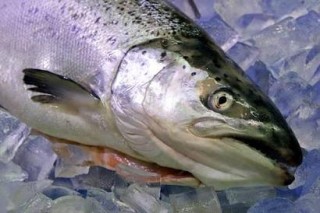 Picture of salmon which appears in our article on salmon poaching in Killererin
https://dpdgay9x1sxad.cloudfront.net/killererin/wp-content/uploads/sites/11/2015/01/salmon.jpg

It’s hard to believe now but I was six or seven before I even knew what a salmon was.

Salmon come out to spawn around this time of year and in times past, when they came, we were ready for them. We would have with us a broken down fork specifically designed for the purpose of catching the salmon. It would usually have four prongs and while most were home-made, it wasn’t unknown for a blacksmith to make them to order. The real professionals would have five prongs and these were deadly accurate. It would have a knot on it to nab the fish alive when they came. They were then thrown down into a bag usually containing nine or ten more.

Sod of turf soaked in paraffin

One person would usually lead the way with a sod of turf soaked in paraffin on top of the fork to light the way and attract the salmon. You had to be careful too about the type of turf used as black turf was no good for this type of usage. The light could be seen for miles away and sometimes you would have to queue there would be so many there. There wasn’t much else to do and it was regarded at the time as great sport. It was also a great source of sustenance in impoverished times.

Gardai on the lookout

No more than the poitin, the Gardai were always on the lookout for such activities if you were unfortunate to be caught, you’d have to give up your catch and to add insult to injury, you knew that more than likely, the self-sane Gardai would be eating your good catch the following day. You could be fined also if you were caught. I remember, one fella carrying a bag of 30 one night when he was caught. He ran off up river but was eventually caught after putting up a good fight.

Good strong men were needed to walk in the river and they used boots with holes in them for the water to go through. They would have a fork each and there would be another fella with a light on a pitchfork. There would be more on the bank and a scout who would give word to the lads who would stick them with the fork and then would put their hand into the water to shoulder height and put their hand in behind the gills which would smother the fish. In my time, I saw up to 30lb fish but the nicest were around the 8lbs or so.  It could also become very competitive with people from neighbouring parishes getting in on the act. At times like these, there was safety in numbers. If you weren’t careful, they would take your fish off you.  Salmon were very plentiful in December but this was not a good time to eat them. This didn’t worry most of us but I remember our teacher Mrs.O’Reilly telling us that we should only eat them in the summertime. In winter, their flesh turns white and this is not the ideal time to eat them

Around here, good spots for catching salmon were Castlemoyle, Togher, and Anbally among others but unfortunately the Corrib Drainage Scheme put an end to one of our favourite pastimes.