You are here: Home>Topics>Food Heritage of our Parish>Travelling Shops and shops of Killererin

Travelling Shops and shops of Killererin

Extreacted from Shops and Shopping in Killererin 1840-2015 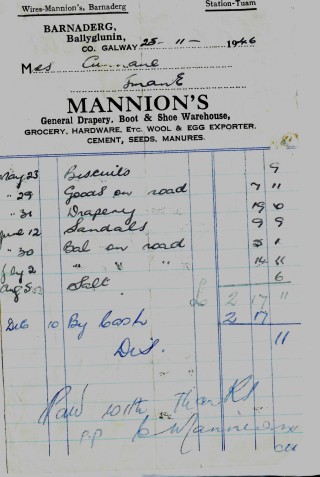 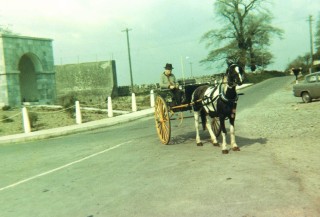 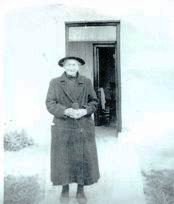 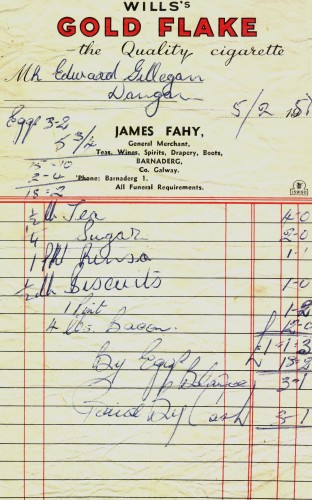 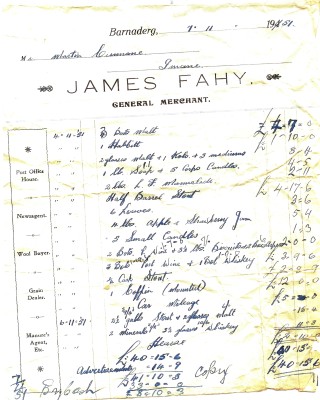 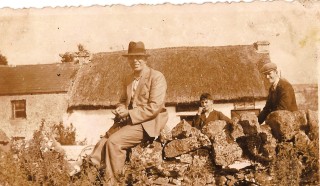 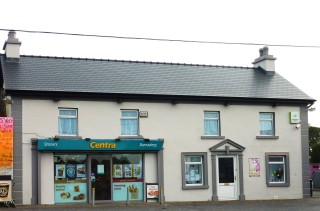 Wide variety of shops throughout the parish

While carrying out research for our parish history in 2015 we were surprised by the number and variety of shops dotted all over the parish from Ballina to Cloondahamper and Dangan to Togher since the 1840s.. What follows is a summary of our findings.

Today, all over the country, shopping is done on a daily basis with ease of access provided by the ready availability of transport.  However, in the past, shopping was a weekly occurrence and people had to wait for the travelling shop which came to all the houses in the local area on a designated day. Goods were bought and sold in many cases by bartering, and farmers would mainly exchange eggs for their purchases.

In the 1930,s Patrick Mitchell from Barracks had a travelling shop which travelled the hi-ways and by-ways of Killererin.  During the war years, Finnertys and Cheevers in Moylough also came with their horse drawn travelling shops.[3]  Others that followed were Hares from Tuam,  Bobby Gilmore from Moylough, who once owned the premises now owned by Patrick and Anita Stone in the village.  He had a horse-drawn travelling shop.  Christy Mannion from Barnaderg is the travelling shop most people in the locality remember and he did so from the 1950s to 1970s.  He also owned the local shop that still remains today in Barnaderg.  Peter Burke from Garra and Molloys from Cornacarton also ran travelling shops as did Pat Gormally from Ballaghalode and T.P. Niland from Tuam[4].

“In 1957, the travelling shop was a regular sight throughout the countryside.  Everything you needed was in that lorry – from a bag of flour, meal for the hens, nuts for the calves and even a spool of thread. No hassle going to the supermarket then!  All the weekly groceries were bought to you, outside the door. It was an exciting time for us then as we always got a loaf and jam and sweets were usually thrown in on that day. It was divided amongst a large family.  We were self-sufficient then.  We grew our own potatoes and vegetables and had our own milk. We killed a pig and made our own black puddings and of course, we had plenty of fresh eggs.  The basket of eggs almost paid for all the other groceries and sometimes there was some change left over.  We reared chickens, ducks, geese and turkeys for Christmas. We had all the seasonal fruits – rhubarb, apples, gooseberries, blackcurrants and redcurrants.  These made all the desserts and we had plenty of milk to make the custard and everybody baked their own soda bread”.

“He probably heard more confessions than any parish priest. The troubles and joys of every woman within a 30-mile radius were poured out to him and his advice was treasured more than that of any skilled counsellor. His weekly call was something to be looked forward to by all – the mother exchanged bits of gossip with him, the offspring tottered about with mouths open, watching for an apple or a bar of chocolate, while the man of the house would venture out when the deal was nearly done to find out about the price of wool or whether cattle would improve in the fall.  Right well, Christy relished the chat.  Many’s the word of consolation he spoke, which took a load off a mother’s heart, as she spoke about the son that had gone a bit to the bad; the daughter who hadn’t come home for months or the husband who had to go to the hospital for tests the next day. There was never any rush driving off, the day was long, people had their troubles to tell and he reckoned that words didn’t cost money.  At time’s you’d hear the complaint – Christy is late today – but whatever about being late, there was no doubting that Christy would come.  If he didn’t, a part would be missing from the week and that didn’t happen often in the year. Only two weeks of the year would the travelling shop not turn up, Race Week and the week after Christmas. Even then, he’d be missed for the half-pound of tay or the two stone of pollard for the hens or for the score of eggs which had been stored up for sale.

In the early years, eggs were the making of Christy and the households for that matter. There wasn’t a house in the country which hadn’t at least 30 hens and with eggs going a good price, many’s the week, the eggs paid for the groceries and gave a bit of change as well.  If truth be told, there were one ortwo dicey customers on Christy’s run whose eggs weren’t always what they should be; but that didn’t worry the man in the travelling shop. Such trivials weren’t worth rows, he reckoned. Many such things weren’t worth thinking about in Christy’s mind. There was many the week, when a woman wouldn’t have the price of the provisions and she might even want a few quid to pay the rates but there would never be a word of compliment or complaint as Christy provided the necessities. He reckoned that whenever they got the money, he’d get his and that was the way with many of them. Not alone was he a travelling shop, he was a travelling bank as well”.

Shopkeepers who operated in Killererin in the past

The following is a list of shopkeepers who are known to have operated outlets in Killererin in the past. More than likely there were others, which are unknown to us[2].