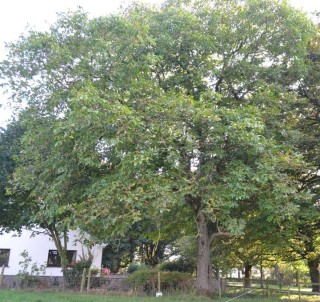 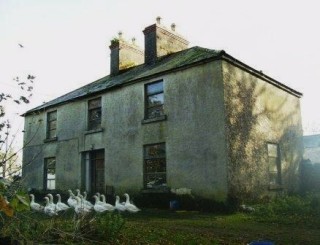 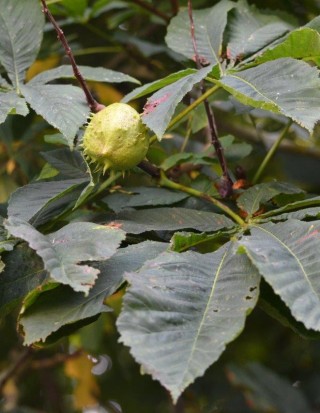 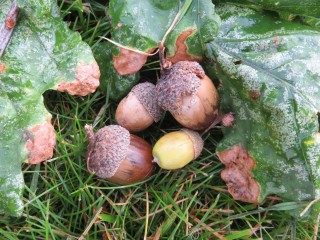 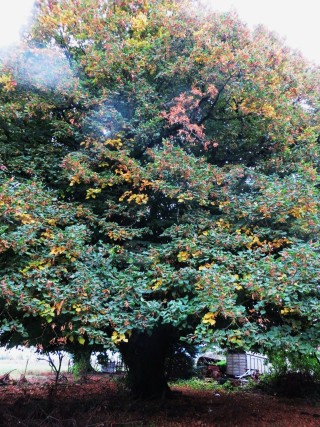 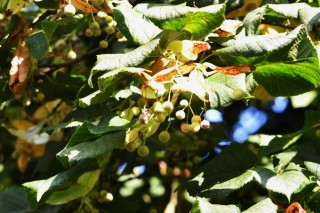 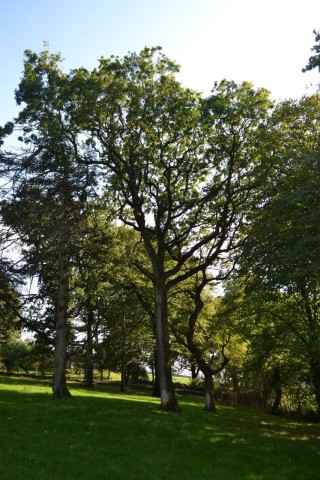 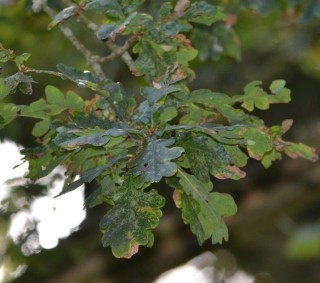 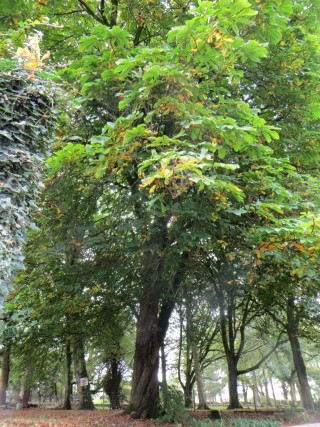 .It might astonish many of you to know that there are over 10 species of trees growing over one acre surrounding the old Cahergal House.  Some are native trees but there is one special surprise – a walnut tree .

A walnut tree (Juglans Regia) is not native to Ireland and originates in Asia.  It was first brought over to England in Medieval times and then to Ireland.   Walnut trees have been grown in Ireland for at least four hundred years, and probably much longer. One of the earliest known plantations of walnut trees was on the estate of Walter Raleigh in Co. Waterford c1600.

The walnut tree in Cahergal is approximately 150 years old, and was probably planted by the original owners of Cahergal house the Ruttledge’s.  To our great delight, The tree produces walnuts.  The yield is not high as they are very hard to grow, being intolerant of wet climates.  They tend to do better in the drier, eastern parts of Ireland.  The best locations for walnut trees are sunny, relatively sheltered sites with deep, well-drained soil high in organic matter.

It will surprise you to know that the walnut first appears as stone fruit covered with green husk.  Inside this, is the brown shell that we are all familiar with and inside that is the walnut.  The Greeks called walnuts karyon, meaning “head,” because the shell resembles a human skull and the walnut kernel itself looks like a brain! The green husks can be used for dyeing fabrics.  So it is recommended to wear gloves when taking on the green husk or you will have brown stained hands. The nuts are ready to harvest when the green husks start to split, which is normally late August through September.

One little known fact about walnuts is that both roots and leaves produce a growth inhibitor – juglone – that has a detrimental effect on other species of plant growing nearby.   For this reason, it is recommended that walnut trees are grown in relative isolation from fruit or other nut trees.

A Walnut tree can reach 40 to 60 feet in height and develop a crown of the same size.  The life span of a walnut tree is 20 to 250 years.  So hopefully we will have many more years to enjoy our walnut tree.

Another unusual tree in Cahergal is the Common Lime Tree (Tilia x europaea).  Unfortunately it is not the one that produces lime fruit! It is also known as the linden or basswood and has roots that extend back to medieval times when it was considered the tree of lovers.  The common lime tree can grow 130 feet tall and typically lives to 500 years old.

It is a deciduous broadleaf tree, native to the UK and parts of Europe.  Its leaves are similar to the beech tree but larger and heart shaped.  Limes are hermaphrodite, meaning both the male and female reproductive parts are contained within one flower.   The tree produces small, sweetly scented white flowers in June and July. The flowers provide nectar and pollen for insects, particularly bees.  The nut-like fruit, the size of a pea, hangs on the tree in small clusters that are shed in October. The small berries of the lime tree can be used to make a soothing tea.

The wood of the common Lime is white, smooth and close-grained. It is a light wood and doesn’t become worm-eaten. It is useful for small things that don’t need much strength. It is often used for carvings and the sounding boards for pianos, and for artist’s charcoal. The stringy inner bark of the common lime tree is used to make baskets and ropes.

There are three large lime trees Around Cahergal House, with the largest being approximately 450 years old. This means it was planted in the Cromwellian times, when the plantations began in Connaught.  There are also many lime trees growing by the road side from Cahergal to the Grand Gates at the entrance to Dunleavys’ house.

There are three Oak trees among the many trees near the road frontage of Cahergal house.  The English Oak or Pedunculate Oak (Quercus Robur).     Pedunculate Oak is the less common of our two native oak species; it is found on heavier, more alkaline soils in the midlands.  Pedunculate Oak produces acorns on stalks, which will distinguish it from sessile oak acorns which do not have stalks.

The Oak Trees in Cahergal

Once widespread throughout Ireland, centuries of harvesting, with few trees being replaced, means that truly native oak can be hard to find, though there are small woods in most counties.  The male flowers of oak are borne on rather inconspicuous catkins, which come out just before the leaves, but he seeds – acorns – are far more obvious. Oak trees do not produce a good crop every year, so it is worth gathering plenty in a good year.   Also the production of acorns starts at the age of 20 to 50 years. A lot of animals (pigeons, duck, pigs, deer, squirrels, mice…) feed on acorns.  So the fowl kept in Cahergal have a healthy diet!

The oaks in Cahergal are approximately 150 years old.  Oak trees are usually large in size. They can reach 70 feet in height and 9 feet in width. Their branches can reach 135 feet in length.  Due to its large dimensions, oak requires large amount of water per day. It can absorb 50 gallons of water each day.   The oak is one of our largest and longest lived tree (second to yew in the longevity stakes).

Grown as an ornamental tree in Ireland for the past 200 years, it’s most commonly found in woodlands and hedgerows, and generally reaches up to 36 metres in height.  The tree grows into a domed collection of thick branches, which are covered with large, sticky brown buds.  In Spring, these flower into white flowers with pink or yellow spots before spiky fruits known as chestnuts or conkers develop in the Autumn and fall to the ground.

How does this common tree get its name?  To find out, all you need to do is, snap off a leaf-stalk from one of its twigs and you will notice the horseshoe shaped scar present – hence the name Horse Chestnut! The horse chestnut tree is the common chestnut tree found in Ireland.  It should not be confused with another tree call the Sweet Chestnut tree (or Spanish chestnut), which gets its name from the fact that its nuts are sweet and edible, most commonly, roasted. There are much fewer Sweet Chestnut trees in Ireland.

The common Horse Chestnut tree produces nuts (conkers) that are poisonous. However, some mammals (deer, horses) are able to break them down and eat them safely. They are also reputed to be good for horses with wind!

Most commonly, the nuts are used for the popular children’s game Conkers, possibly originating from the word Conquerors. Another explanation is that it arises from the French word cogner meaning to hit or biff.  In some parts of the world, this game is called Kingers. The first recorded game of Conkers took place on the Isle of Wight in 1848 and was modelled on a 15th century game played with hazelnuts.  The myths that surround the Conker Tree are many and varied.  One such myth, being, that placing conkers in household furniture or in the home will keep away moths or spiders and if placed in ones pocket helps prevent rheumatism and piles!

The other species in front of Cahergal House include Pine, Ash, Sycamore, Beech, and Elder which are all in close proximity to each other.