by his niece Teresa Donnellan, Hillsbrook) 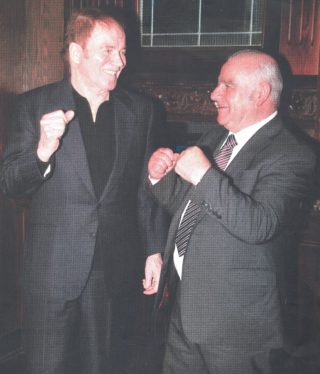 This is the story of Micky Coen who was born on 30th September 1932 and was raised on a farm in Ballyglunin. Micky says that they worked hard and he can remember spreading turf and thinning beet when he was thirteen – hard work, all the time, with no let up. Their home was similar to others of the period, – no running water and rainwater was generally used along with the local pump for spring water. Neighbours were good but still emigration was rife.

There were fourteen in the Coen family and Micky was the seventh son. He adored his mother and even after he emigrate,d he never missed sending home his weekly letter with a little money to make life easier for her. All his brothers were equally good to her. Although the Coens had a good farm of land, they had no money but for what the land produced. Micky didn’t think much of that. As he says “we had cabbage, turnips and stuff that wasn’t the finest – I never had a sweet ‘til I came over here (Manchester).

When he was young, there were no other Coens in the area but now there are numerous families. Micky’s Dad was born in Leigh, Lancashire but his Dad was Irish and his Mum was part Irish from Leigh. Micky’s grandfather came from Galway and his brother in Galway had no family so they adopted Micky’s Dad when he was two or three year’s old. He was reared by them and eventually inherited the farm.

Micky remembers his schooldays as being the happiest of times but when he came home from school, it was not homework they had to do, but to get out and work on the farm. Similarly, in the morning they had to go a couple of miles, to pick the cows up for milking and then bring them back again. So they were up early in the morning and often went to school with their clothes all wet.

Micky emigrated to England in 1949 but it wasn’t because he had no future in Ireland, he just wanted to travel. He was sixteen when he left but he doesn’t remember much about that boat trip, only that he was scared. They had been told stories of the boats sinking and the waves being very powerful. Micky was terrified but he remembers somebody playing the accordion and thinking they were so brave.

Micky first went to Manchester but eventually worked all over England. His first impressions of Manchester were not so good. His experience prior to this was of people coming home from England with their suits and collasr and ties. When he arrived, he felt that he would have been better off staying at home. However, he decided to stay about three weeks and gather a bit of money together and return home as he didn’t like it. Soon, three weeks led to six weeks and then he opted to stay. Although Micky had family in Manchester he didn’t stay with them as he hadn’t told them he was coming. They would not have accepted that he had emigrated. At one point, before he left, his mother had urged him to stay home but he told her he wanted to travel. At the time, there was no light or water in his room at home as was the case for every family in the area. Instead, his brother Denis stayed at home to work the farm.

Micky’s first job was at a heavy engineering plant called MetroVicks where his job was cleaning up and sweeping. He left that and went hood carrying which was very hard work but it meant more money. When he started “carrying the hood” he was struggling, but after three weeks he got used to it. He went from job to job wherever the money was and had lots of friends.

It was only when he started doing the Doors (Bouncers – they are now called) with his boss Frank Dolan and with Paddy Hines all around Manchester that he grew to love Manchester. His brothers also worked on the Doors but Micky never worked with them but relieved them from time to time. He enjoyed working on his own and enjoyed everything that happened on the Door. Micky was young he says and it was all he wanted. At the time, he didn’t realise, it was a dangerous job but knows now that some carried cut-throat razors and chains. Micky says there was always violence but they wouldn’t shoot you. As he says “If you’re afraid to do something, you don’t do it.”

He subsequently became a ganger on jobs all around the place and worked for many companies including Pincer McNicholas from London. When he started with them, it was really hard graft and everybody had to do their bit. In his first job he got £8 a week but when he started there, he got £2 a day and had a lot going for him. By this time, he had become very interested in boxing and when he went back to Ireland at 18 he won the senior Connaught championship. After that he went back to Manchester and eventually decided to go professional. Micky was doing very well at boxing and had ten fights altogether. He won nine of these but then he lost his licence because he had been getting into trouble on the Door,s so was suspended for twelve months.

When he was doing the doors, there were many fights and he still bears the scars today. They didn’t mind him doing the Doors if he stayed away from cobble fighting. As a boxer Micky was a great crowd pleaser and the most he earned for one fight was £200. That was a long time ago he says and he topped the bill for that. He boxed also in Liverpool and was on the same Bill as Pat McAteer.

Took on all comers at Fairgrounds

When Mickey left professional boxing, he went on the Fairgrounds taking on all comers at weekends as he was still working by day. He was picked up by van and got £2 a fight. His wages were about £24 a week at the time and this would double his earnings. He got plenty of challengers but if he lost a fight, he lost his job. Mickey didn’t lose his job, even though he was challenged by all the champions as they would sometimes gatecrash the fairground if you had beaten up their pal. Occasionally, Mickey would get a drunk challenging him and they would get a quid (£1) for their trouble. He would go three rounds with them but would not hurt them. Then he would meet a real challenger and he would have to “change gear”.

Started his own company

Mickey did some work as a subbie for companies and saved approximately £7,500 which was a lot of money then. He never smoked and drank only a little. He started his own company COMAC Construction in 1962 and was working as a contractor directly for BT (British Telecom) laying cables. He did this for them both in Manchester and Liverpool. When he started, there was no machinery and everything was done by hand. Consequently he had a lot of employees. They did everything from digging and filling the wagons to stoning and backfilling. Nowadays, this is all done by machines.

In 1957, he married Helen O’Connor and he has two daughters, a son and five grandchildren. He educated them all very well in the best of schools, determined to give them what he had not – a good education. Comac Construction continued until 1982 when he sold the Company as the recession hit. His yard was next door to Granada TV in Manchester who wanted his land to build more studios. He didn’t want to sell but received an offer which he could not refuse. They bought everything including the plant, which there was a lot of.

With the money he received from Granada, he took his wife and children on a world cruise and though they returned Micky kept travelling and ended up boxing illegally in New York. He still wanted to box but his wife was having none of it. Micky believes boxing is bad for you – “it’s dangerous.”

Song written about his exploits

Up to recently we know he still worked out. Micky had a song written about his exploits called The

Cobblefighter. The song was written by Mary O’Brien and recorded by Seamus Moore.

Here is an excerpt from this song:

Even as a young man,

Everybody knew his name

He came from Tuam in Galway,

Cobble fighting was his game.

Micky Coen you’re a rare one,

The folks around would say

Whatever will become of him,

I often heard them say.

But Micky was just waiting and

Longing for his time

When inside of a boxing ring, he

knew that he would shine

And when at last he got his chance,

That’s just what he did.

He boxed his way to fame and

Micky Coen you’re a rare one,

You’re known both near and far

From a humble start in Galway,

You grew up to be a star.

T’was with fire in your heart,

You left your own home town.

Promising yourself no-one was

gonna put you down.

Follow the link to hear Seamus singing the song with Micky seated beside him.