You are here: Home>People>Dear James ....

The following letter dated May 1898 was given to us by John Lennon from Dundrum Co. Dublin.  John has no connection to our parish but has had a lifetime interest in philately. Like many of us, John has been decluttering during the Covid 19 pandemic and luckily for us he found this letter. Thankfully he found us through our website and contacted me.

In his own words

“I have a lot of stuff that’s not worth much generally but is treasure for the family or area relevant to it. Such is this letter, which in itself is worth nothing. My interest was in the envelope which has a very fine strike of the numeral cancellation ’43’ allocated to Ballyglunin in 1874. I’m divesting myself of my material as otherwise it will probably end up in a skip when I go. You’re welcome to have it as
that’s where it belongs,”

On enquiring further, John told us more of his story …

Back in the late forties my father started me on stamp collecting. As well as an all world collection I focused on Ireland and soon had all those I could afford. One day my grand-father gave me an 1860s envelope he found in the office with a Victorian stamp postmarked in Dublin on it. This led to an interest in Irish postal history and the accumulation of old letters.

Law firms relocated in the 1970s and files were dumped

In the 1970s, many law firms relocated in Dublin (I think a lot of old leases dating back to 1770s came up for renewal) and hoards of old files were dumped. Some were rescued and appeared in auctions and in stamp dealers’ stock. I got several boxes as well as old collections. One of my boxes came from Stewart & Kincaid, land agents during the Famine, and was used by Desmond Norton for his 2006 book Landlords, Tenants, Famine.

My interest then narrowed down to County Limerick of which I made an 80 page exhibit for which I gained a silver medal at an international exhibition in Paris a couple of years ago. That’s about the apex for me and I’m now disposing of my unrelated material. Unfortunately, I have no idea when or how the Ballyglunin letter came into my possession.

Although I still research postal history and philately my main interest now is local history and I do heritage tours of Dundrum for the Council in summer.

I don’t know where Donnelly’s House was in Terenure. In 1893 a James Mullin married a Delia O’Shaughnessy in Tuam. In the 1901 census, there is a James Mullin, born in Co. Galway, living not too far away from Terenure on Harold’s Cross Road with his wife Delia, also born in Co. Galway, and two young children, 3½ & 1½. It may not be the same couple as the ages don’t match. There’s no sign of them in the 1911 census.

In his original letter to us John says “As you can see, Mary wasn’t into punctuation. The number 43 was allocated to Ballyglunin in 1874. The late Jimmy O’Connor, last Head Postmaster of Galway, wrote a fine history of the Post Office in Co. Galway, published in the Galway Archaeological and Historical Society journal in 1922. He gives 1855 as the date of establishing an office in Ballyglunin but I know it was open 1n 1853, as Ballyglunin Park, sub office to Athenry. By 1856 the ‘Park’ was dropped.

There can be little doubt that it was opened due to Martin Blake ……. as the office was in a building on his estate, hence the name.   ….. At that time, sub-offices didn’t cancel the stamp but just date-stamped the letter which would be cancelled in Athenry. That policy changed in 1860 and then all offices cancelled the stamp.”

The Letter (written as it appears on the original without punctuation etc.)

Your very nice letter received in due time & would have answered it before but I was waiting to see if Martin McHugh would sell the horse yesterday at Athenry but he didn’t  it was the worst fair that was ever held there & the largest he did not get one offer but when he was going in on Sunday evening he was offered fourteen pound but there was a law against any purchase on Sunday evening so the police were watching otherwise he’d sell he is going to Dunmore again next Monday with her.

Bob Canavan took first prize at the horse show in Athenry yesterday his sister Mary Canavan is gone to the nuns in the Convent at Ballinrobe for the last week  I was in Killereran last Sunday for a drive all are well  there is one of the brothers, _________ going to get married to a grand-daughter of Michael Bruen, Moyne  her father’s name is ___________ there is none in the house but her father and mother and eighteen acres of land he is taken £120 pound there I suppose that is what she is marrying and not him for indeed his appearance isn’t so pleasing

I am sure you will be surprised to hear Patch Hughes is dead in America Father Mark asked to pray for him on Ascension Day the hag was at Mass but wasn’t a bit concerned we are going to have Mass again at the monastery as Robert Blake went in to see the Bishop and got him to lend a priest there every Sunday at 40 pound a year well what do you think but ould Tommy has the shop back again for the last fortnight but I heard last night he got orders to close it up as McDonnell to comply with the licence law could not spare an assistant during the fair days so he gave them the key and I suppose they will try to hold on to it – he sent seven half barrels there Kit is barmaid.

They were playing? … the first days minding it and nothing else and allowing their sheep in our garden so I went to McDonnell about it and asked him to command his caretaker out there to mind his sheep so he said he would and if they wouldn’t we to summons them but they are minding them since Martin McHugh was the salesman at the fair of Tuam and did well too  we had six cattle there the war is having a little effect on Liberty St. and I think Tom will soon go on a trip.

We were shearing on Saturday last had the same old hands as usual myself and Kearney are great friends all along  I think he expects to come back to Ballyglunin again and of course the Jager was very much to the fore the shearing day.

I think I’ve said my share now until I hear from you again hoping all is well as all here are old chap stronger than ever no dynamite at all those times. 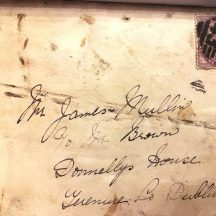 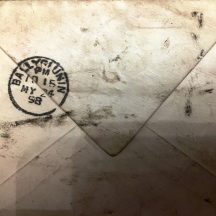 Back of envelope posted from Ballyglunin in 1898
J. Lennon, Dundrum, Co. Dublin 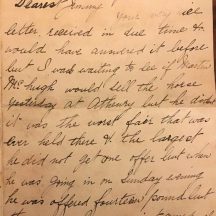 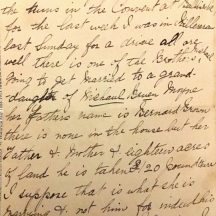 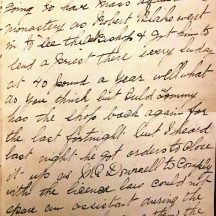 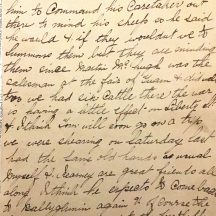