Extract from chapter on Postal services in Killererin - A Parish History 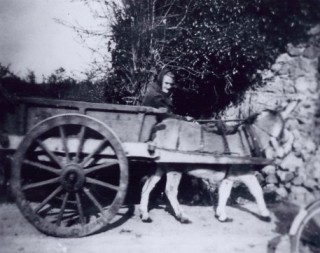 Mrs. Biddy Mitchell, nee Coen going to the post office for her pension in 1957
contributed by Kathleen Fleming, Hillsbrook 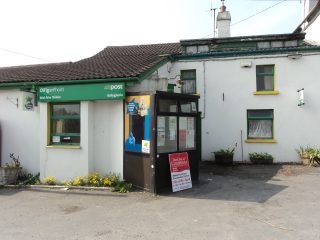 In the first half of the 19th century, the nearest offices to Killererin were at Dangan, near Horseleap crossroads, and Tuam. A diligence, or a smaller two-horse coach, met the Dublin-Galway coach at Ballinasloe and took the mail and passengers to Dangan and Tuam, and then on to Castlebar. Some of the local gentry sent a servant on horseback to get their letters and often the messenger would oblige neighbours by bringing their mail too. Outgoing mail was posted the same way. Dangan Post Office closed on 1st April 1864.

In about 1854, the year the railway line from Dublin first reached Galway, Ballyglunin Park Post Office opened for business for the parish of Killererin. At that time, the post office was located in a thatched house owned by Martin J. Blake of Ballyglunin at Polsillagh. It was set up as a sub-office of Athenry from where it was served by a horse-drawn mail-car. Patrick Moran was the last postman whose job consisted of collecting the Killererin mail and cycling with it from Ballyglunin Post Office to Barnaderg Post Office daily. There it was collected by the local postman, latterly Miley Nolan, for distribution.

In 1856, William Freaney was appointed Postmaster of the Ballyglunin Park Office. He was succeeded by a Mr O’Brien, for whom we have no exact date of appointment. During his term as postmaster, or maybe at the end of it, the post office was changed to its present site. This site was located nearer to the newly opened Ballyglunin Railway Station and adjoining the gate lodge on the back avenue leading to Mr Blake’s house.

Change of control from Athenry to Tuam

Martin J. Blake was a major shareholder in the Great Western Railway Company and he was also the guarantor of the post office. The station opened in November 1860. John Kennedy was appointed Postmaster of Ballyglunin Post Office on 22nd August 1896. During his term, on 1st March 1912, the post office changed from being under the control of Athenry to being under the control of Tuam GPO. His son, Michael Kennedy, took over as postmaster on 17th May 1914 and ran the post office until 22nd February 1956. Michael’s wife then took over as postmistress and ran the post office until 17th August 1971.

In 1971, Julia Mannion was appointed Postmistress and she served for over 20 years, until September 1995, when her nephew, Pádraic Mannion, took on the role of Postmaster. He began by extending and refurbishing the post office and remains in situ.[3]

Duties of a deputy sub-postmaster

Some of the duties of a deputy postmaster, as defined by Edward S. Lees (Secretary to the Irish Post Office), are outlined below.

Sadly, Ballyglunin Post Office closed its doors for the last time on 31st October, 2019 after 23 years of service by Padraic Mannion. It was just one of 18 post offices in Galway which closed under the voluntary retirement scheme for local postmasters and postmistresses. It has been over 100 years since there was no postal service in Ballyglunin.