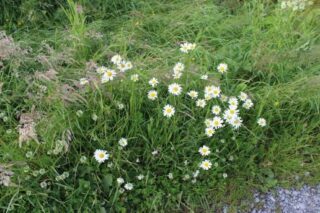 The census of Ireland 1841 shows that there were four houses and and 18 people living in Derrybawn. By 1851 despite the famine, the population had increased from 18 to 24 and there were six houses.  This is attributed to the trenches often seen in bog-land that provided drainage. The resulting ‘lazy-beds allowed the growing of potatoes in areas where no other cultivation could take place.

The accompanying photo is of a bunch of daisies that were just growing on the roadside where little else could grow and are stunning in their simplicity.