You are here: Home>People>1937 Schools Folklore Collection>The Fox and the Goat

The Fox and the Goat 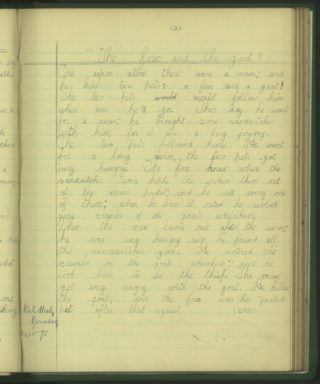 The Fox and the Goat
Kate Healy, Barnaderg

One upon a time there were a man; and he kept two pets: a fox and a goat. The two pets would follow him where ever he’d go.

This day he went for a swim; he brought some sandwitches with him, for it was a long journey. The two pets followed him. He went for a long swim, the two pets got very hungry. The fox knew where the sandwitches were kept. He poked them out of the man’s pocket; and he ate every one of them; when he had it eaten he rubbed some crumbs of the goat’s whiskers.

When the man came out after the swim; he was very hungry and he found all the sandwitches gone. He noticed the crumbs on the goat’s whiskers ∵ and he took him to be the thief. The man got very angry with the goat. He killed the goat, and the fox was his greatest pet after that again.