You are here: Home>People>Killererin's Military History>The Rising, Sinn Fein and the Treaty

The Rising, Sinn Fein and the Treaty 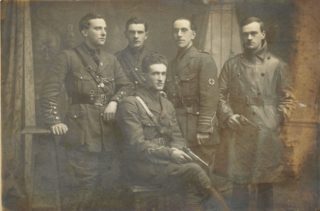 After the Easter Rising

After the Easter Rising had taken place, the Sinn Fein organisation was strong in Killererin and remained properly organised until the Truce of 1921. In 1918, the British Conscription for Ireland Act was introduced. This had the effect of bringing a big number of recruits into the Barnaderg Company, the majority remaining until the conscription passed. Arms and ammunition were obtained by raids during the winter of 1919 and early in 1920. About twenty-five shotguns were collected.

Members of the Tuam Company had been mobilised in 1916. Some were later arrested, including Patrick Dunleavy from Coolreagh. However, in 1917 he became Quartermaster of the Tuam Battalion, in 1918 Captain of the Dunmore Company, from 1919 till 1920 he was O/C of the Claremorris Battalion, Co. Mayo, and from January 1921 until the Truce of the same year he was O/C of the North Galway Brigade. On one occasion, he was in charge of an ambush of RIC and Black and Tans at Lissavalley – between Derreen and Barnaderg – and in April 1920, he received a death threat: “Prepare for death”. He kept it as a talisman for the rest of his life. Shortly after the threat, he was sent to North Galway by General Head Quarters to rebuild the brigade that had been decimated by Auxiliary action.[2]

From 1917, there were ten companies in the Tuam Battalion. The names of the Barnaderg Captains were Michael Ryan, Thomas Dunleavy and Timothy Dunleavy.[3] Michael J. Ryan, also from Coolreagh, was the captain of the Barnaderg Volunteers, Tuam Battalion. He was born in December 1894. After secondary education, at the age of about 16, he worked on his father’s farm in Coolreagh. He joined the Tuam Company of the Irish Volunteers at the age of 20.

About this time, Gaelic football and hurling were banned by the British except where a permit was obtained from the authorities. The Barnaderg club applied without the knowledge of the Volunteers and was granted a permit. The local sergeant of the RIC said that everything was in order for the playing of the match. After a meeting of some Volunteer officers, the match was called off because it was to be played under a British permit.[4]

During Christmas 1919, a meeting was held in the Addergoole Sinn Fein hall. Present at that meeting were the Barnaderg captains and others. It was decided to join the Sylane Company for an attack on the Castlhackett RIC barracks that was to take place in early January 1920. By Easter 1920, a number of other RIC barracks were destroyed by the IRA, among them the Barnaderg RIC Barracks (Glenrock House), which was burned on Easter night. It had been evacuated only a short time before that and the Sergeant’s wife, Mrs Cain, was living there with her children. They were taken to safety by the IRA before the barracks was burned with the use of paraffin oil. Officer in charge was Michael Moran, O/C Tuam battalion.[5]

Addergoole Sinn Fein hall, where the attacks were planned, was originally a disused house, but it was converted into a meeting place for the company and was also used for fund-raising activities from 1917. The labour in the reconstruction of the house was voluntary and the cost of the materials was repaid out of proceeds of Céilis, lectures and Irish classes. The hall was destroyed by fire by the RIC and Black and Tans on the 19th July 1920.[6] That night Tuam was also attacked by the same force of RIC and Black and Tans because four RIC men had been ambushed near Tuam and two of them, Constables Carey and Burke, had been shot dead.

In November 1920, Michael Moran was arrested on a Thursday night at the house of his sister, Mrs Dolan, Castleview. He had been working on his brother-in-law’s farm. He was not long inside when ‘the house was surrounded by auxiliary police and saw there was no means of escape’.[7] The house was entered by four or five persons with flashlights and revolvers who immediately began a search of the premises.[8] A young servant boy was questioned and a revolver held to his head while he was in bed. Mr and Mrs Dolan’s room was the last searched and here Moran was found. Later, he was released but re-arrested.[9] Moran was killed while a prisoner at Nun’s Island, Galway, in November 1920. His body was brought to the Tuam cathedral where there was an unarmed guard of honour of Volunteers. About 200 Volunteers marched in military formation, but British forces with fixed bayonets broke through their ranks and pushed them into the side of the road. They formed a cordon between the immediate relatives and the general public. The Archbishop of Tuam, Thomas Gilmartin (1918-1939) protested vigorously but to no avail.[10]

When a large anti-conscription meeting was held in Tuam, a big march from Barnaderg into the town was organised by M.J. Ryan, Patrick Dunleavy, his brother Thomas and Fr. Brett CC, Killererin. The priest was the principal speaker at the event. He was a very active Sinn Fein member. The RIC in Barnaderg never attended second Mass which was always said by him. He frequently managed to bring into his sermon a reference to the political situation as it was then and he openly condemned the RIC for their part in holding the country for the British. Once, when an elderly man noted that the RIC were approaching and said in Irish “Tá na preacháin ag teacht go dti an Chruinniu” (the crows are coming to the meeting), he answered “Ní miste liom” (I don’t care).[11]

Robbery of McHugh’s shop, Barnaderg by IRA in 1921

In 1921, the Treaty was signed but was not accepted by all and this divided communities and even families. Some were pro and some were anti treaty. In 1923, on a Monday night about 11p.m., a number of men knocked and were admitted to the shop of Mr John McHugh, Barnaderg. Two of them had revolvers and were not disguised, while the other three were masked but had no revolvers. They said they were IRA men and proceeded to take goods from the place. They took 249lbs of bacon, 40 pairs of boots, 12lbs of tobacco and 5 shillings in cash. The Post Office was attached to the shop premises but the raiders did no damage there beyond upsetting papers and evidently searching for money which was not in the place.[12]