Extract from chapter on Military History, -Killererin - A Parish History

Photo taken outside R.I.C. Barracks, the identity of the officers on either side is unknown. Back row l-r: Mrs. Bridget Cain,her daughters Agnes and Kathleen (mother of present owner of Barbersfort House, Dom Dunleavy). Front row l-r: Sergeant Dominick Keane who is holding his grandson Dominic and in front is an R.I.C. officer whose identity is also unknown with Rose Keane to his right.

Where they were stationed

In Killererin, the RIC is thought to have been stationed in what is today Joyner’s Public House and later in Glenrock House beside the Community Centre in the village. It is not known exactly when the Barracks changed location. Glenrock House is not indicated on the earliest OS Map (1837-1842) though a Police Barracks is given on what is thought to be the site of the present day Joyner’s Pub.[1] One of the pub’s back windows, shown below, is barred and this room may have been used to retain prisoners.

Burning of Barracks in 1920

A witness statement given by Thomas Wilson, Bishop Street, Tuam, to the Bureau of Military History in June 1955, states that the barracks in Barnaderg was burned on the night of Easter Saturday 1920 and that the barracks ‘had been evacuated only a short time before and the Sergeant’s wife was living there up to the night it was burned. We had to remove her and her family before destroying it’.[3] The Sergeant at this time was Dominick Keane (Cain).

In the 1901 census records, all of those stationed at the barracks were listed as ‘Roman Catholic’ and ‘Farmer’s Son’, with the exception of Constable R.J. H who was a ‘Presbyterian’ and ‘Scholar’. In 1901, the barracks was described as a first-class house with five front windows and ten occupied rooms with four out-buildings. The landowner was named as John B. Smith.

RIC members stationed in the Barracks in Barnaderg in 1901[5]

In 1911, all the RIC men at the barracks were Roman Catholic. The barracks was then listed as a second-class building with four occupied rooms.  According to the 1911 Census, there were eight persons using the barracks at that time and Ulick J. Burke was the land owner.

RIC Members stationed at the barracks in Barnaderg in 1911[6]

In 1911, William Hanrahan, again recorded as Sergeant of the barracks, was the only married man stationed there. William was born and baptised in June 1860 in Kilbaha, Moyvane, Co. Kerry and died in Barnaderg on 10 February 1918. He was the son of Michael Hanrahan and Peg (Margaret) Cunningham who married on the 25th June 1854 in Moyvane, Co. Kerry. William’s siblings included John, who became known as ‘The Major’, Patrick, Johanna and James. William married Bridget Ryan who was a local girl born in 1873 in Abbeyknockmoy. Bridget died in Barnaderg in 1962. William and Bridget had thirteen children – Michael, Patrick, Mary, John, William, Ellen, Celia, Thomas, James, Julia, Lou[ise], Vincent and Teresa (Tessie).[7] 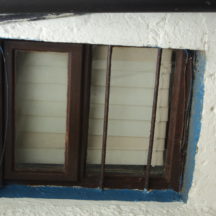 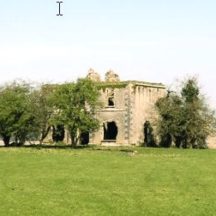 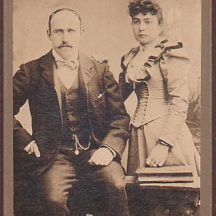 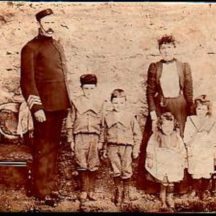 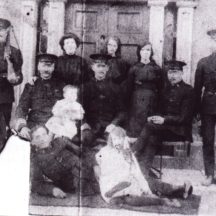 Photo taken outside RIC barracks. Identity of officer on either side is unknown. Back Row l-r: Mrs. Bridget Cain, her daughters Agnes and Kathleen Cain (mother of Dom Dunleavy, present owner of Barbersfort House), Front row l-r: Sergeant Dominick Keane who is holding his grandson Dominic and in front is an R.I.C. officer whose identity is also unknown with Rose Keane to the right
Killererin - A Parish History P 486