You are here: Home>Topics>Food Heritage of our Parish>Killererin - A Parish History>Local Musicians Struck a Sweet Note 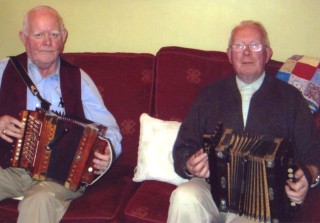 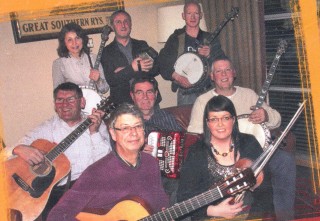 Peter Carey, 2nd row 1st left with members of Tuesday Trad session in Lowry's Clifden
Photo: taken from back of CD in aid of Galway Hospice 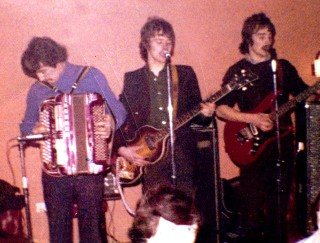 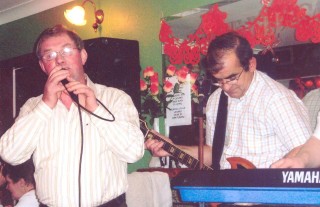 Musicians in any parish hold a special place in the hearts of its people and are often called on to entertain for mostly happy occasions. Over the years in most villages, someone had a talent for playing the accordion, tin whistle, guitar, or other musical instrument or was a good singer. In times gone by, it was mostly the accordion or violin that was the instrument of choice.

Willie Fleming from Hillsbrook had a special talent as an accordion player. With his own unique style, he played at many functions and with many different bands.

Donie Mullins, a local schoolteacher, along with Barnaderg post office man, Sean McGrath, played with a band called the ‘Red Wings’ in the late 60s and early 70s. They played at socials, dances and in singing lounges often joined by Pat Comer on drums and vocals. They were also the resident band in Galway’s top singing lounge – Barretts’ of Mountbellew and other venues.

A top class keyboard player, Donie also played the organ in Killererin Church for many years. Later on he played with the Highlanders and George Murray and in his early days, played the odd gig with the famous Johnny Flynn showband, from Tuam. I often played a few nights with Donie in the local raves. Donie was at his best singing The Old Danganview Oak. Donie also played with Mickey Devaney and the Blue Minstrels. Paddy Flood played trumpet, Bobby Dempsey – saxophone, with Donie Mullins on the piano accordion and Sean McGrath on the organ.

The popularity of the pop groups and showbands of the 50’s, 60’s and 70’s gave great encouragement to aspiring musicians and in 1972, the Kelly brothers and Billy Kemple formed the local group called the Steamboats.  Bernie played the guitar and his brother Willie played the harmonica and drums; Billy Kemple did the vocals. They were later joined by Christy Greaney on vocals and guitar. The band caught the imagination of the people of the time. They played at venues all over Connacht ranging from Belmullet to Clifden as well as singing lounges all over the county. The personnel of the band changed over the ensuing years with John Nolan, John Fleming, Fintan Killeen, and John Rooney all featuring with them.

The Gypsies band was formed in 1975 by Bernie Kelly, Richard McWalter and John Fahy, Tuam. They were later joined by Tom Keane (Abbey) on the drums.

Other people in the parish also emerged as musicians in their own right. P.J. Staunton, Clogherboy and The Jackhammers had a successful period in the 70’s.

Michael Dolly formed the Forest Ramblers; Peter Carey from Clogherboy, played guitar and harmonica and still plays with his own band in Clifden where he now lives.

The Wild Breed, one of the top Irish pop groups in the 70s had Hillsbrook ‘born and raised.’ Frank O’Connor as their bass guitarist. Frank now lives in Claregalway and plays with his own successful group. Many of the musicians mentioned in this article are still performing at some level and over the years have been great entertainers.

Music always needs a venue and Comers’ Hall Barnaderg was very popular. All the bands played there. Pat Comer, who is a good singer himself and whose father Mick opened the hall has many fond memories. Later the singing lounge took over and Kellys, Barnaderg, now known as the Red Gap, was the place to be with music three nights a week in the 70s, 80s and 90s.

I have lived in Barnaderg for 30 years and enjoyed many functions and gigs in the parish. I started playing the guitar and singing at an early age with my brothers Michael and Tom when I lived in Newtown, Abbeyknockmoy. Michael who lives in Cloondahamper plays bass guitar and sings with me whenever he can. It was a privilege to have played also with the local artists, The Gypsys, The Steamboats, New Dawn (John Fleming and John Fleming Jnr), Michael Dolly and the Forest Ramblers and many others.

In 2006, history beckoned and we launched the CD album “Killererin Sings” with local talented artists. I had the privilege to produce the album and it was a great success and is still available today. Music is the spice of life for many people and there is no shortage of it in Killererin parish.

Music was also important to clubs and organisations as fundraising and presentations could be carried out there. To conclude, those magic years were exciting and enjoyable. Those bands and artists helped to bring a little joy to everyone.

(If you or anyone you know, has a photo of any of the bands featured in this article, no matter what condition it is in, we would love to see it and put it up with this page.  Just contact us on Killererinheritage3@gmail.com or on our facebook page or alternatively contact any committee member Bernadette Forde, Eileen O’Connell, Seamus Morrissey, Mary and Dom Dunleavy and Brendan O’Boyle)