You are here: Home>People>Killererin's Military History>Memories of a brave Irish soldier and his family links with Barbersfort House 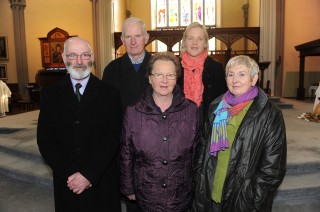 Fifty years ago, between 1960 and 1964, more than 6,000 Irish soldiers served in the Congo. It was a major international peacekeeping mission — Ireland’s first armed involvement with the United Nations. Most of the Irish soldiers had never been abroad before and they were ill-equipped for Central African conditions, making it a difficult and ultimately traumatic operation. A brave Irish soldier, with a strong link to the parish of Killererin, gave his life in the line of duty.

The Democratic Republic of the Congo (formerly Zaïre) is a vast equatorial region, the third largest country in Africa by area after Sudan and Algeria, and the 12th largest in the world. It is 4,000 miles from Ireland.

Ireland has been supplying peacekeeping troops to the United Nations since 1958, serving in many countries, but over the past half-century nothing evokes a frisson of fear, and immense sadness, to compare with the effect on people of the mere mention of the names of that huge country, the Congo, and a small town by a river, Niemba. They are indelibly written into our country’s military history. It is a story of our soldiers’ personal courage, honourable commitment, loyalty to a worthy cause, and to each other.

Further back in time, the Congo had become known worldwide through the pages of a classic work of English literature, “Heart of Darkness”, written by Joseph Conrad in the 1890s and published as a novella in 1902. It was the story of Charles Marlow, an Englishman who took a foreign assignment from a Belgian trading company as a ferry-boat captain in Africa. Conrad was exposing the myth behind colonisation while exploring the three levels of darkness that the protagonist, Marlow, encountered: the darkness of the Congo wilderness, the darkness of Europeans’ cruel treatment of the natives, and the unfathomable darkness within every human being for committing heinous acts of evil. Katanga, a breakaway province within the Congo, was where our story started for the Irish soldiers.

The 30-Year Plan for Political Emancipation of Belgian Africa.

In the early 1950s the Belgian Government came under pressure to allow the Belgian Congo to become a self-governing state. Belgium had ratified article 73 of the United Nations Charter, which advocated self-determination, and the two big superpowers put pressure on Belgium to reform its Congo policy. The Belgian Government’s response was largely dismissive but in 1955 a Belgian professor, AJ van Bilsen, published a treatise called The 30-Year Plan for the Political Emancipation of Belgian Africa. The timetable called for gradual emancipation of the Congo over a 30-year period — the time Van Bilsen expected it would take to create an educated elite who could replace the Belgians in positions of power. To cut a long story short, this plan was never made official. All early political efforts were hampered “because Belgium had made no plans for Congolese independence. There were fewer than 200 native university degree holders, and no Congolese in the entire military with a rank higher than Sergeant.”

In May 1960 Patrice Lumumba’s MNC party (Mouvement National Congolais) won the parliamentary elections. Lumumba was appointed Prime Minister and Joseph Kasavubu was appointed President. The Belgian Congo achieved independence on June 30th 1960 but before long the provinces of Katanga, led by Moise Tshombe, and South Kasai engaged in secessionist struggles against the new leadership. Most of the 100,000 Europeans who had remained behind after independence fled the country, opening the way for Congolese to replace the European military and administrative elite.

Into the explosive scenario that followed the province of Katanga declaring independence under regional premier Moïse Tshombe came the newly established United Nations Force in the Congo and troops from Tunisia, Ethiopia, Ghana and Morocco soon arrived at Leopoldville, capital of the Congo. By July 15th, 1960 there were 9,496 U.N. personnel in the Congo from Ethiopia, Ghana, Guinea, Liberia, Morocco, Sweden and Tunisia.

It is recorded by the Military Heritage of Ireland Trust Ltd that on July 17th the United Nations had requested the Irish Government to send a force of men to the Congo. The next day a Cabinet meeting was called and the idea approved. The call for volunteers and the departure of the Irish soldiers to Africa occurred exceptionally fast. In a period of just two weeks the Government and Dáil agreed to send two infantry battalions to the Congo.

In November 1960, only four months after arriving in the Congo, nine members of an 11-man Irish patrol were savagely killed by Baluba tribesmen in the Niemba ambush. It still has a hugely emotional resonance for the people of Ireland.

Niemba is a small town (population 1,800) in the Democratic Republic of Congo, Katanga Province. It is situated on the Lukuga river, a tributary of the Lualaba river. A nearby bridge, over the Luweyeye river, was the site of the massacre on Tuesday, November 8th 1960.

Baluba tribesmen in reported numbers varying from eleven to 26 were killed as the U.N. troops (all Irishmen) attempted to defend themselves against overwhelming hordes of attackers.

Kevin Gleeson – first Irish soldier to die in the ambush

Kevin Gleeson died for Ireland and for the United Nations; for peace,law and order in the Congo.

The first Irish soldier to die in the ambush was the brave platoon commander, Lieutenant Kevin Gleeson. He was the son of a Tuam woman, Agnes Keane, and her husband Michael Gleeson, a Cork man. Michael was a Sergeant in the newly established Civic Guards force, stationed in Tuam where he met Agnes, daughter of Dominick and Bridget Keane. Dominick’s brother Fr Willie Keane was particularly well-known as P.P. of Claran, Headford for the two decades before his death in 1981. Agnes (née O’Malley) was only 18 when she married Michael Gleeson; they lived at Ballygaddy Road (opposite what is now the Glynns’ Hardware premises) and many years later the Gleeson family would return to live in Tuam for two years.

A favourite aunt, Kathleen Keane (Agnes’s sister), was married to a very well known local man, Dominick Dunleavy from Barbersfort House, Killererin, and to this day Fergus Gleeson, brother of Lt Kevin, says his fondest memories of holidays anywhere in the world are of the happy times they had, at various stages of their lives, down in Galway at the home and farm of Dominick and Kathleen Dunleavy.

Kevin Gleeson was the fourth of 13 children; Fergus, a retired Galway-based Army Commandant, was the eleventh. Living in Clarinbridge, where hurling has taken over as his main sporting interest after playing football, hurling and rugby in his younger days, Fergus and his wife Paula (née Stanley, a Clifden woman) have a family of eight, including their daughter Aoife who works for the international aid charity Concern Worldwide. On one of her trips to Africa, Aoife visited the Congo and went to Niemba to see where her uncle Lt Kevin Gleeson was killed.

Fergus Gleeson grew up mainly in Goresbridge, Co. Kilkenny, next door to the famous horse-racing stables run by legendary trainer Paddy Mullins, and Fergus was in secondary school at nearby Bagenalstown, just over the Kilkenny border in Co. Carlow, when he got news in November 1960 that his beloved older brother would not be returning home alive.

Lt. Kevin Gleeson, 33rd Battalion 2nd Field Coy. Engr. Coy., died for Ireland and for the United Nations on a blood-soaked foreign field, far from home. He was aged 30, married with a six-year-old son. A commemorative stone was placed in his honour in Carlow town.

They also died in the Niemba ambush

The remains of Tpr Anthony Browne, Rialto, Dublin, aged 20, a single man, were recovered almost two years after the massacre.

Lines from “Invocation To The Muses”

Reaped are those fields with dragon’s teeth so lately sown;

Many the heaped men dying there — so close, hip touches thigh; yet each man dies alone.

For the soft ultimate sigh or the unheeded groan

Hast thou — to make death decent, where men slip

Down blood to death, no service of grieved heart or ritual lip

Transferring what was recently a man and still is warm —

Transferring his obedient limbs into the shallow grave where not again a friend shall greet him,

Nor true love run to meet him?

In the last hours of him who lies untended

On a cold field at night, and sees the hard bright stars

Above his upturned face, and says aloud “How strange . . . my life is ended.”

If in the past he loved great music much, and knew it well,

Let the full symphony across the blood-soaked field

By him be heard, most pure in every part,

The lonely horror of whose painful death is thus repealed,

Who dies with quiet tears upon his upturned face, making to glow with softness the hard stars.