You are here: Home>People>Priests and Nuns from the parish and Priests that served in the parish>Fr. Edward Egan 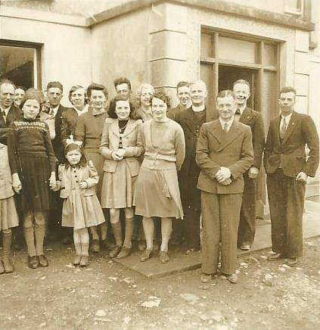 Fr. Edward outside his sister Mary Finnegan's house in Dunmore. His nephew Pat Finnegan in the front to his left along with others who are as yet unknown
Debbie Hadley, USA 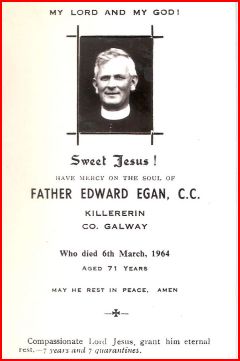 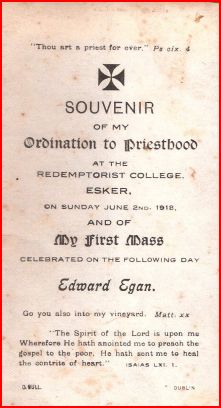 Fr. Edward Egan was  a native of Dunmore parish and was ordained on 2 June 1918. At that time, the priests’ ordinations were brought forward to 28th April because of the threat that non-ordained clerics might also be subject to compulsory conscription, which had been enacted in April of that year. The ordinations took place in Loughrea (Clonfert diocese) because of the death of Archbishop Healy in March and his Auxiliary Bishop Higgins in April.

Fr Edward however was ordained on 2 June 1918 but had previously been Prefect of Studies from 1917 in St Jarlath’s College, Tuam.  He served in the following parishes: Crossboyne,  Keelogues, Annaghdown, Donaghpatrick, The Neale (Cong). In 1940, he had a leg amputated and was on temporary leave until 1944 when he was appointed as Chaplain in the Franciscan Monastery, Brooklodge, Ballyglunin. He served in Williamstown from 1944 to 1958 when he moved as Curate to Killererin.  Fr Edward died in the Bon Secours Hospital, Tuam on 6th March 1964.

Fr. Egan is remembered fondly in Killererin by local people who served Mass with him and remember him as a nice man.  The word trathuil was used to describe him meaning he was quite laid back and friendly.   One lady who was a child at the time and lived beside him told us that he had his own house and had a live in housekeeper.  Sometimes when she and her friends passed by, he would call them in to do small jobs for him.  When they had finished their tasks, he had a tin box where he kept halfpennies and pennies and he would give them a penny or more. This was a lot of money for a child then.  She recalls going up and down outside the house several times a day in the hope of being called in.

(The above information was provided by Debbie Hadley who is a great-niece of Fr. Egan’s and is carrying out research on his life. Former Parish Priest of Killererin, Fr. Kieran Waldron, was the source of that information.  Killererin Heritage Society provided the last paragraph after carrying out their own research.  We are grateful to both Debbie and Fr. Waldron for sharing their knowledge)