You are here: Home>People>The Legacy of a famished orphan

The Legacy of a famished orphan 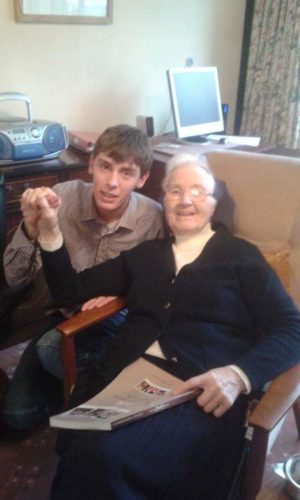 Mary Collins was a mere seven years old when she and her siblings Katie and Johnny were orphaned shortly after the Great Irish Famine. In the space of two hours in 1857, Mary lost her mother to starvation and her father to a farming accident at home in Cloondahamper.

According to her grandchildren, Mary’s grandparents had starved themselves during the famine to increase the chance of the children’s survival.  It is understood that Mary lost seven siblings to starvation before losing her parents.  Her mother Maggie Collins had been ill for some time and the family had been living in poverty.  Her father Tom Collins (locally known as Tom Nally’) was working for the local landlord  ploughing a field when his plough slipped and he fell into a deep part of the Grange river.  When his wife Maggie heard of her husband’s death, her health further deteriorated and she sadly passed away less than two hours after her husband.

According to local tradition, the local parish priest made an inspirational speech at the wake that evening.  He called on the landlord to cancel the rent for the Collins’ house and the priest also encouraged a spirit of sharing between neighbours, pointing out that at the wake there was food to go around.  He argued that if these steps had been taken earlier this tragedy may have been avoided.

The parish priest of Killererin is said to have cared deeply for the three orphans and ensured that they were well looked after and that they remained on the family farm.  It is also claimed that the priest himself funded the education of the children.

From a very early age Mary Collins had a strong faith, she always encouraged the priest to pray with the children.

At a relatively young age Mary Collins married Thomas Whyte from Williamstown and he moved in to the Cloondahamper farm.  Mary and Thomas had 12 children; most of them emigrated or died young. Two of their daughters, Ellen and Mary Kate Whyte became religious sisters.  Sr Valerie (Ellen) joined the ‘Little Sisters of the Poor and Sr. Eulalie (Mary Kate) joined the order ‘Servant to the Mother of God.’

Mary Collins-Whyte lived to be a great age and was a wonderful storyteller in her Lavally home.  She died in 1937.  Her faith and her stories hugely impacted her grandchildfren.  Many of her grandchildren joined religous life; her grandson Oliver Whyte (1921-2009) became a Columban Father, Elizabeth Whyte (1931 – 2007) was a ‘Servant to the Mother of God’, Sr. Rita Whyte is a Daughter of Charity  and Patricia Whyte (1927 – 2014) joined the Presentation Order.

I spoke to Sr. Patricia on many occasions  before her death and I also travelled to England twice to meet with Sr. Rita who now resides in a nursing home in South London aged in her 90s.  She has been a religious sister for over 70 years.  She has spent those years serving the poor and homeless and nursing the sick.  The last time I spoke to Sr. Rita she related to me many stories about her grandmother.

‘We were poor, but we were happy’ said Sr. Rita. “I remember as a child I slept in the same  bed as my five sisters and many’s the morning I’d wake to find one of my sisters’ feet in my face, as we used sleep some at one end of the bed and more at the other! The worst memories I have are of my family members emigrating.  I’ve been here a long time now, but Galway will always be home!”

It has been noted by many people in the Galway area that the one characteristic which united all of the Whyte family is the kindness and love they showed to everyone be it in the classroom, in poorer continents, or in nursing homes.

May God reward these fine people who have gone before us and may we be forever grateful to Mary Collins who spread the love of Jesus through her ordinary life, seldom leaving her North Galway townland in her 87 year lifespan between 1850 and 1937.  She and her descendants have done a lot of good for the world, be it at home in Ireland, in Rome, in communist China, in Russia, in London in Boston in Tuam or in New York.  We have a great deal to be thankful for.

Sr. Rita passed away in February, 2018 just shy of her 93rd birthday.  Her brother Jack Whyte, was a well known gardener in Ballinasloe.  Her brother Mickey Joe Whyte died a few years ago in Boston at the age of 96.