Extract from chapter in Killererin - A Parish History pps 500-501 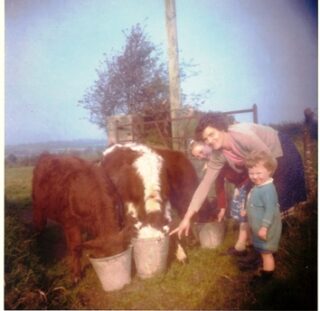 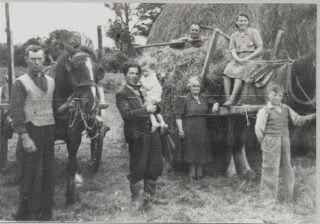 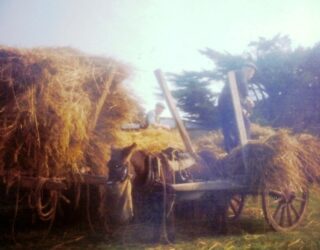 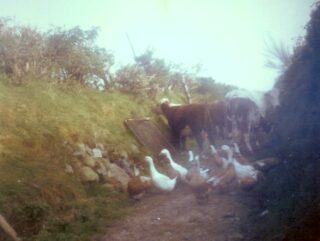 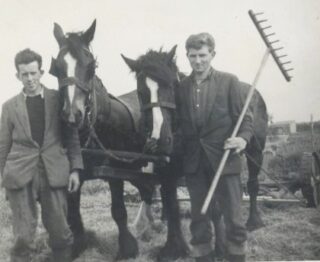 Farming was the principle occupation of the people of Killererin and the surrounding vicinity. Many families had a mother or daughter who worked as a seamstress or dressmaker and this supplemented their income. Those who lived close to the village of Barnaderg and the big houses in the area, held other occupations such as cook, housemaid, gardener, groom or gamekeeper.

The changes in farming and rural life were gradual and in the main brought about by the O’Malley buses, which were introduced when free education was granted by the then Minister for Education, Donagh O’Malley. The group water schemes, rural electrification and Ireland’s entry into the European Union also brought about change.

The vast majority of farms during the late 1900s were beginning the process of transfer of ownership under the Land Commission from landlords to tenants. At this time, the more affluent farmers were obvious by the number of outhouses on their homestead. Some even employed farm labourers, journeymen and domestic servants. Due to the vast amount of people who had emigrated, labour was often scarce during the busy harvesting and turf-cutting season. The preparation of the land for the potato crop, the harvesting of the grain crops and the making of hay were very time consuming.

In those days, both men and women travelled the country, moving from farm to farm offering their services and many returned year after year; they were known as journeymen.[1] They brought with them all kinds of stories, yarns and general gossip which they picked up along the way. Some were master thatchers, others, builders. They also brought knowledge of different farming methods. They did this in exchange for a roof over their heads and food.

Farming life 50 years ago was very different to today. A farming family was almost self-sufficient and most food put on the table was home-grown. The only food items that were bought were basics like flour, porridge, tea, and sugar. The Irish diet at the time was simple but healthy.

Every farm had hens and might also keep geese, ducks, and turkeys. We always had plenty of eggs and my mother regularly sold a basket of eggs to the shop. We kept about sixty hens and would hatch about twenty chicks from eggs every year to replace older hens. The cocks of those young chicks were reared and killed for the dinner table. The turkeys, geese, and ducks were usually sold in the weeks coming up to Christmas, to the merchants, or in the street of the town, on a Saturday.

We would buy 2 or 3 six week-old pigs and keep them for about 4 months until they were fully grown and fattened up on potatoes and meal. Then we would kill one for ourselves and sell the others. When a pig was killed, it was a job that involved a few of the neighbours. The meat was well-salted to preserve it and stored in a timber box which was known as the ‘bacon box’. This preserved the bacon for several months.

Sheep and cattle were also kept by most farming families.  There was no dairy farming in this parish at that time but a couple of cows were often kept to provide the family with milk and butter. Back then, milk was not sold in the local shops. If you had no milk, you would have to ask a neighbour for some.

The main winter feed for the cattle and sheep was hay. One or two fields would be fertilised in the spring and the grass allowed to grow. In fine weather, in the summer, the grass would be cut and let dry in the field. If you didn’t have a mowing machine, someone in the village would have one and would cut it for you. It would be turned with a fork and a rake, which was hard work, and the whole family would be involved. When the hay was ready it would be piled high into cocks and be brought in from the field with the horse and cart.

Horses were crucial to farmers

There was a horse or two and maybe a donkey on every farm and if you were going to the fair, or even to Mass, you would take the horse and trap. The horse was used for many purposes on the land, like ploughing and tilling. You would need two horses to plough and a farmer who only had one horse would pair up with a neighbour.

Oats, barley and wheat were sown as well as an acre or two of potatoes. Many locals also grew beet for the sugar factory in Tuam. The ground was fertilised with manure. Many farmers bought the potash, nitrogen and super phosphate separately to mix the manure themselves and this would be spread by hand over the land.

Every home had a garden near the house to grow vegetables and early potatoes. This was called the ‘cabbage garden’. The main crop of potatoes would be sown separately. These were picked in October and kept over the winter in a pit dug in the field, covered with hay and soil to protect them from the frost.