You are here: Home>People>Charles Bianconi

The Italian who coached the Irish 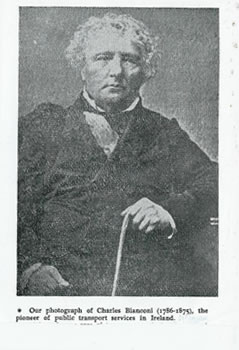 In the mid 1930’s, my late father Martin Mullins, having returned from America, bought some land at Dangan. Included on the land was an old Bianconi Coach stop. It was built in 1842 in famine times and was regarded as the main stop between Ballinasloe and Claremorris.  It was one of those places where the horses were changed and fed. It, of course, also facilitated the usual passenger and mail service. Why was it called a Bianconi Coach Service and what made it noteworthy? A short history of its founder will answer both questions.

Bianconi (1786-1875) was born in the village of Tregola in the Lombard Highlands in Italy. As he showed little talent at school, his father apprenticed him to an Art Dealer, Andrea Faroni. In 1802 Faroni arrived in Dublin, accompanied by Bianconi and two other apprentices and set up a little shop in Essex Street. The boys, knowing little or no English, were sent out on the streets to sell pictures. Bianconi acquired a working knowledge of English faster than the others. Before long, every Monday morning, he was sent down the country with a supply of pictures and four pence in pocket money, with strict instructions to be back in Dublin the following Sunday night. As Bianconi struggled to survive the hardship he daydreamed, “Maybe some day I’ll start my own business”.

Started his own Print business

In 1804, his term of apprenticeship to Faroni expired and in pursuance of his dream, he decided to start his own print business. His first venture was in Carrick in 1806. A year later, he moved to Waterford and he finished up in Clonmel in 1809 as a carver and gilder of the first class. Ever since he arrived in Ireland near the beginning of the decade, Bianconi had thought about the poor travel facilities. Roads were little more than cart tracks. Water transport was slow and inefficient. In fact, the vast majority had no alternative to “shanks mare”. He began to daydream again… Why not have a public transport system that everybody could afford?

After the battle of Waterloo, horses for the Army were available at a reasonable price. The circumstances fitted in with the dream. I suppose the wise men of the 21st century would call it Synchro Destiny…July 6th 1815, saw the first Bianconi car travel from Clonmel to Cahir and back. The distance travelled was 22 miles, the average speed was 7mph, the number of passengers was six and the cost was a penny farthing a mile. Before long, cars would run to Tipperary, Limerick, Wexford, Waterford and Kilkenny. Demand was growing in other places too. Over the next thirty to forty years, Bianconi Transport, with Clonmel as its centre, became a Nationwide System. The “Bians” could be seen on every road in Ireland. The number of Bianconi employees increased rapidly. The coach capacity increased to 20, all produced at Bianconi’s own factory. There was need for more drivers, guards, agents and stable hands. Farmers signed contracts for the supply of oats and hay. Coach building and harness-making became major industries. The hotel and catering industry benefited. In 1832, Bianconi secured the huge mail-carrying contract for the British and Irish Post Offices.

In 1827 he married Eliza Hayes, daughter of a Dublin Stockbroker. They had a son and two daughters. The second daughter married Morgan John O’Connell, nephew of Daniel O’Connell, the great Liberator. She subsequently wrote her father’s biography. In 1834 the first railway line was opened between Dublin and Dun Laoghaire. Bianconi saw this as the beginning of the end for the Coaching business. He bought shares in the different lines as they were built. He became a director of the National Bank founded by Daniel O’Connell. In 1843 he became a Borough Councillor in Clonmel. He was Mayor of Clonmel for two years in the mid-1840’s and continued to have an active interest in politics and business until his death. He died a millionaire at Longfield House, Boherlahan, Co. Tipperary, in 1875. I still use the building as a store. I often wonder what would have happened if away back in the 19th century, Charles Bianconi, instead of dreaming his dream had left us with our cart tracks and our “shanks mare”.