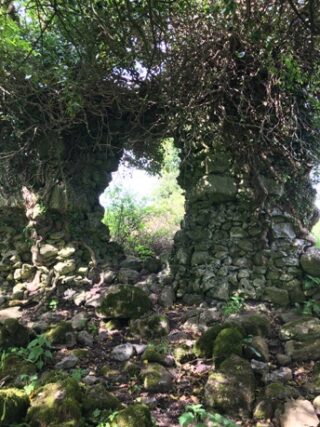 Entrance to ruins of Grange church 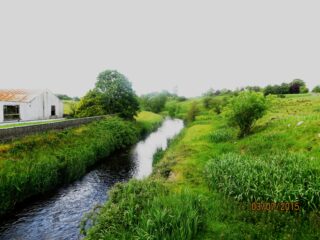 The townland of Grange (in Irish Gráinseach, a granary or more generally a farm attached to a monastery) consists of c. 240 acres on the hill slopes from Creevaghbaun Carmelite Church (founded in
1332, closed in 1839) down to the Grange River (a tributary of the River Clare) which encircles the townland on three sides, now in the parish of Killererin, Cill ‘Fhir Iarainn, the church of the iron man,
barony of Clare. It is today bisected by the 11Km R332 roadway from Tuam to Barnaderg so that Grange Bridge is the parish boundary between Tuam Cathedral Parish and Killererin (Barnaderg) Parish. The Creevaghbaun Carmelite ruins became the local cemetery but no old records exist. Grange was a well populated village before the famine with 126 people living in 22 houses in 1841 but by 1851 this was reduced to 54 people in 9 houses. By the 1901 census it was 26 in 6 houses only. Evidence of farming around the Creevaghbaun hillside can be seen in several earthen ringforts (farmyards) from perhaps as far back as 300 AD.

The landlords were the Henrys of Lodge Park, Straffan, Co. Kildare who purchased the bankrupt Deane estate (granted in 1677) of 5,376 acres in 1790. Reputed to be good and generous landlords, Hugh Robert Henry was succeeded by his son, Robert Henry at Toghermore House, a committed Christian Socialist who set up a co-op ownership scheme for the tenants, which eventually was handed over to the Land Commission in 1950. The layout of the townland is unusual in that all the small plots are
grouped together near the bridge; their vegetable gardens around the houses and their lands accross the R332 road with the common bog area, (liable to flooding) from there down to the river.

The original Griffith’s Valuation map seems to indicate a road track winding around between the houses which perhaps had been made redundant by the building of a bridge (and roadway) over the river?

Thomas Loughan (Plot No.4), Peter Joyce (6), John Monaghan (3) and the two Nolan brothers, James (5Aa) and John (5Bb), had 18 acres and 36 acres common bog area, total of 54 acres, between them. Hugh Henry had 34 acres (1A) of the hill behind them and a further 93 acres (1B) of good land across the river, total of 127. William Wills (8) had 56 acres on the hill. He also seems to own several properties in Johnstown, Co. Kildare and with a Belfast name must have been, we can only surmise, an agent for the
landlord. Near the river behind the hill, and also down near the bridge, the Farrells whose cousins (?) owned several mills with an impressive cut stone mill race, had a total 15 acres (7 and 9). Traditionally townlands are divided in Ceathrú or quarters. Here it appears that Hugh Henry had half the land, William Wills a quarter and the poorer tenants the final quarter! Below is a map (coloured) As a village, Grange had several advantages. Apart from the water supply in the river it had three spring wells, one on each side of the bridge and another some little way down the track to the bog. The river had several weirs to catch eels and stepping stones for crossing above and below the bridge. At the bridge we find a stone quarry (bridge stones?) and a lime kiln to produce the quicklime for plastering house walls and dashing the interiors for health and hygiene. There was also a sheepcote near the bridge and another
on Mr Will’s land.

Most intriguing are the ruins of “Grange Church and childrens’ burial ground” in the back corner near the monastery with the outline of an entrance road, perhaps the original ‘mother church’ of the parish.
There are some random small stones (even some arch stones from the monastery) as if to mark graves but no inscriptions or records. We can guess that some of our little cousins or famine victims are
buried there? See photo from Killererin Heritage group.

On the other side of the Creevaghbaun monastic ruins, there is a holy well and an impressive sweat house of some considerable size. This would have been where a fever could be steam treated, perhaps supervised by a Carmelite apothecary or herbalist?

Across the bridge the Grange River forked (then) at the townland of Eadargabhail or Addergoole (‘between the forks’) where in 1845 Addergoole National School was built by the Henrys, beside the
stepping stones, closed in 1901. Here we find Michael Lohan of Grange as a teacher on £35 pounds per year in 1889/90 and the date 01/07/1884. Michael was born in August 1871 so the date might refer to the date he began as a student or monitor teacher and where all the Grange children got their education.

In the Tithe Applotment records of the 1820’s (Protestant church taxes) it appears that the Henrys paid (without passing them on to the tenants) and no Grange tenants’ names are recorded, nor are there any in the 1831 Defaulters’ Book).

(Much of the above background information and photos are taken with thanks from “Killererin A Parish History” compiled and published by the Killererin Heritage Society in 2015, also online on their website)

The Grange River joins the main channel of the Clare approximately 2 km north of Corofin. The entire Grange River is listed by the EPA (site code 30G02) as having 14 km of class A waters (54%), 9.5 km of class B waters (37%) and 2.5 km of class C waters (9%). Six sites (G1 – G6) were surveyed and lampreys were recorded at four out of six sites (67%). Maximum lamprey density was 1.80 per m2 . The surveyed area was  m2 at all sites with the exception of G1 where an area of 10 m2 was investigated. On the lower Grange (G1 and G2), no lampreys were recorded and habitats were suboptimal. Further upstream at Aghloragh (G3), there was more suitable lamprey habitat with a sandy silt fine substrate with 40% rooted
vegetation cover. Three lampreys were recorded here, along with both salmon and white-clawed crayfish. The EPA rates this part of the Grange as Q 3-4 (slightly polluted). At G5, the highest lamprey
density in this sub-catchment was recorded with nine lampreys present. Crayfish and salmon were also recorded at G5 along with recent otter spraints. (dung) The Grange River was subjected to extensive fisheries rehabilitation works during the 1990s. (O’Connor, W. (2007) A Survey of Juvenile Lamprey Populations in the Corrib and Suir Catchments. Irish Wildlife Manuals No. 26. National Parks and Wildlife Service, Department of Environment, Heritage and Local Government, Dublin, Ireland.

BROOK LAMPREY (LAMPETRA PLANERI) WHAT IS A LAMPREY? Lampreys (Petromyzontidae) are
some of the most primitive vertebrates alive today being over 360 million years old. They are known
as cyclostomes (’round mouths’) which refers to the fact that they are jawless, having instead a
round sucker-like mouth. Another interesting feature is that the skeleton of a lamprey consists of
cartilage (like sharks and rays) and not bone (like many other fishes e.g. salmon, trout, etc.). There
are 3 species of lamprey in Ireland (river lamprey Lampetra fluviatilis, brook lamprey Lampetra
planeri and the sea lamprey Petromyzon marinus) .There is also a ‘dwarf’ form of the sea lamprey
which is found in a number of lakes (L. Derg, L. Conn, L. Cullin and L. Corrib, some Killarney lakes)
around Ireland. See other information guides. There has long been debate as to whether or not river
lamprey and brook lamprey are in fact the same species. It now seems that brook lamprey may have
evolved from river lamprey populations that were left behind in refuge areas throughout Ireland