You are here: Home>People>What it said in the papers

What it said in the papers

Spring Vale was the residence of the late William Ronaldson who is buried in the Protestant Graveyard in Lissavally. Springvale was advertised for sale by auction in the Freemans Journal in 1872 after his death.

Spring Vale, described as ‘being beside Barnaderg, within four miles of Tuam, and three miles from Ballyglunin Station, A and T Railway held an Important and Unreserved Auction, consisting of all the livestock, household furniture, and implements of husbandry and a Leasehold Interest in a Farm of 70 Irish Acres, also the grazing of over 200 acres of good pasture to the1st May 1873.

The Administratrix of the late Wm. Ronaldson instructs subscriber. Esq.

To sell by auction at Spring Vale on Thursday, the 5th September 1872.

(Listed are herds of sheep, horses and a well known highly bred stallion “Munreo” with his book and engagments and sets of tackling, jaunting car and harness, saddle and bridle with stable furniture. There were also 3 farm carts and farming implements of the highest quality. There were pigs and fowl and dairy utensils and a lot of farm machinery and a large quantity of excellent turf and about 7 tons of prime old hay as well as all sorts of vegetables, in lots to suit everyone.

G.A.A   23rd April 1910
We have a long history of G.A.A success in Killererin as seen in the following report in the Connacht Tribune in 1910.

A great football contest took place at Barnaderg on Sunday, 10th inst., between teams representing Barnaderg Dillon Knights and Castlemoyle Invincibles. This is the second time that these teams have met; Dillon Knights having a better knowledge were far superior to their opponents. F. Fahy, Killererin, refereed the match. At the start play was very strong on both sides, the ball being kept in the centre of the field for the first ten minutes, when P. McDonnell got in a grand point. In a few minutes later Corley got a run, and secured a grand goal. Play was fast at this stage. Castlemoyle making several severe attacks, which were of no avail, the Barnaderg backs were invulnerable. It was within five minutes of half time, and Barnaderg having to make the best of it, got in two more goals and two points in a couple of minutes. Castlemoyle sent the ball into their opponents’ territory, and over the posts secured a very lucky point. The whistle at half–time left the score at Castlemoyle – 1 point.

Second half- both teams played with great determination and Castlemoyle playing with the wind, kept the ball in their opponents’ territory, and several times matters looked very dangerous for Barnaderg, and their backs were very busy, Syng and Fahy playing in great style. Despite all their efforts, E. Ryan scoured a grand point for Castlemoyle in a couple of minute’s later T. Fahy added another. Barnaderg sent the ball up to the Castlemoyle posts, keeping it there for fully ten minutes without scouring anything.  Near full time Castlemoyle got a goal on a foul, which was dissallowed. At full time Barnaderg Dillon Knights were the winners by 2 goals 3 points; Castlemoyle Invincibles 3 points.

1914
Inquest into death of 10 year old girl in Barnaderg

In 1914, the Connacht Tribune reported an inquest held in Barnaderg into the circumstances touching the death of a 10-year-old girl staying in Hessions Public House (Red Gap). The Tuam Deputy Coroner conducted the inquiry and there were fourteen jurors including the foreman. The child died as a result of her clothes catching fire in a bedroom where a fire had been lit a short time earlier. Dr. M.F. Hession, Tuam, reported he made a post-mortem examination of the body and found extensive burns on her back and legs and thighs and wrists. In his opinion, death was due to shock, following the injuries described.

The jury returned a verdict that death resulted from burns accidentally received.[3]

On Tuesday, at Killererin Cemetry, Tuam, was unveiled by Mr. Richard Hazleton, M.P 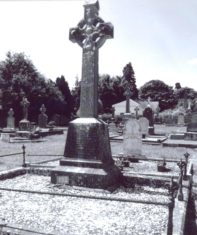 Mr. Hazleton, M.P., who was warmly received, paid an eloquent tribute to the worth of Mr. Higgins, who was a man of great natural ability, a man of tremendous energy and activity in the people’s cause. The dearest tribute, which they could pay to, his memory was to carry out the cause for which Mr. Higgins worked so long and so well. Mr. Hazleton then unveiled the memoria-a CelticLimestone Cross-on which was engraved the following inscription: -“In memory of Thomas Higgins, J.P., M.P., a true and sterling patriot, who never spared himself in the service s of his country; died on 26th January, 1906 ar the age of 40, in the moment of victory, triumphant vindication of the principles to which he had devoted his life. This Cross was erected by his grateful fellow-countrymen, – R.I.P”[4]

The Lyster name in Barnaderg was making history back in 1915 when the Connacht Tribune printed this article:

WITH THE IRISH GUARDS
Amongst the members of R.I.C. who have been accepted for service with the Irish Guards in the present war is Constable M.J. Lyster, of Barnaderg ststion, one of the most popular members of the R.I.C., a fact that was made obvious by the spontaneous outburst of good wishes, which was showered upon him on the occasion of his departure. On Monday night, 2nd inst; his comrades in Barnaderg and surrounding stations, along with some civilian friends, assembled at the R.I.C. barracks, Barnaderg, for the purpose of paying a well-deserved tribute of their esteem and regard to Constable Lyster.Sergeant Keane, who presided, referred in eulogistic terms to Constable’s popularity, not alone with his comrades, but with the general public. Whilst, they regretted his departure from amongst them, they were glad to know that the R.I.C., for the first time in history, was taking its part in the defence of the Empire. Those present heartly endorsed the remarks of the Sergeant. Constable Lyster returned thanks.[5]