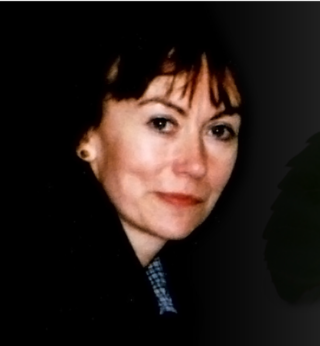 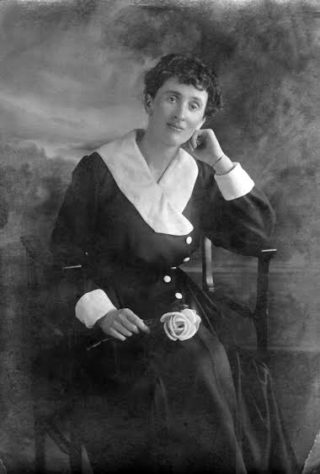 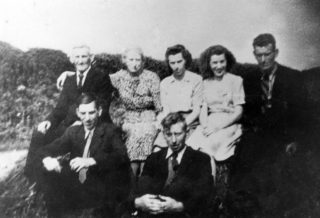 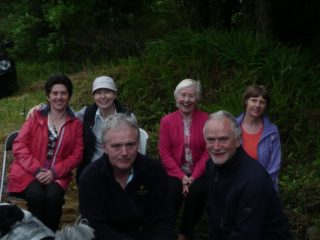 Memories and research by Eileen Fitzpatrick,

On the afternoon of Saturday the 22nd June 2013 cars began to arrive in the street of the Synge homestead in Corralea. The registration plates showed that the cars were mostly from Galway, with a number coming from Dublin, Kildare and Meath. The members of 3 generations of the Synge family had looked forward to this gathering for months and there was great anticipation about what the house would look like. For months Joe and Ger Fitzpatrick, who have inherited the house from Rita (nee Synge) Fitzpatrick, and the family of Bríd (nee Gormally) and Mickey Fahy (Peak, Barnaderg) had been working to bring it back to life after a number of years being vacant and in need of considerable repair and refurbishment. This weekend, we were all here for the garden party and to celebrate the common history we can trace back through the generations

Get together and trip down Memory Lane

Outside the house a white plastic gazebo flapped with gust in the strong wind. Underneath it a barbecue, overseen by Joe and Brett (a Kiwi member of the family), was producing burgers, sausages, baked potatoes. Vegetarian curry and a range of salads were laid out in dishes on a long table. But for the moment, viewing the transformed house was a bigger priority than getting fed. As each of us went from room to room, gasping with admiration for what had been done, there were many comments of ‘Can you just imagine John’s face if he saw this?’ ‘Mam would love this.’ Do you remember when the big brass bed was here?’

Those of us from the 5th generation, who are now the oldest surviving members of the family, touched framed sepia photos on the wall of third generation Synges who had emigrated to the US and the 4th generation who stayed in Ireland. We laughed and reminisced at our black-and-white childhood photos. This house and the surrounding farm have played a defining role in our sense of family, of place and of heritage since we were born and we are anxious to pass that on to our children and grandchildren.

When we sat down outside to enjoy the food it was strange to realise we were sitting on the site where Martin Synge had worked at his loom during The Famine of 1841-1845 to keep his family alive. We don’t know when the first Synges arrived in Barnaderg, where they originally came from or how long they lived here. Our grandmother used to say that they were weavers who ‘were thrown out of the North of Ireland by Cromwell.’ The furthest we can go back is to Martin who was married to Margaret Mannion. In 1855 he was registered as a tenant farmer of Hugh Henry, with just over 15 acres of land in Corralea, for which the total annual valuation was £3.17.0. It is probable that land of those who died or emigrated during The Famine was distributed among the small farmers. Signs of old dwellings existed on the Synge farm until the 1990’s and provided many hours of play for us during the 1960’s as we set up ‘house’ among the mounds of grass and ditches.

Up until 1900 the house was one storey and thatched. It was rebuilt then with a half storey opened into the rafters. John Synge, born between 1831-1839, had inherited the farm and the weaving business from his father. He and his wife Margaret Mannion had 9 children, 6 girls and 3 boys. All the children, except Martin, who as the eldest son would inherit the farm, would have to fend for themselves. In 1901 Margaret died and the 1911 Census shows that by then the only siblings still living at home were Lizzie, (25), Patrick (23) and John (21). They too eventually joined the wave of emigrants from Europe to America which took place from 1850 into the 1950’s. At that time about one third of emigrants from Europe were women, mostly travelling as part of a family unit. Ireland was unique in that the proportion of women was well over half; single and travelling alone, amounting to nearly twice as many women as men. Sarah was the only one of the Synges who came home, where she died in 1915, aged 34, and is buried in Killererin graveyard with her parents. For most, going to the United States was the equivalent of dying. Lizzie bought her father his burial habit before she left, a custom of the time and a poignant sign that she expected never to see him again. Each summer he removed it from its moth-balls and left it out on the bush in front of the house to air. Neither of the emigrant brothers married and only one of the sisters, Harriet, had children; 2 sons, Frank and John Gilroy. When Harriet died leaving the young boys behind, Lizzie and her husband Bill Dyas, brought them up. Frank and John, with their wives and some of their children, caused great excitement as ‘The Yanks’ when they visited Barnaderg in the 1960’s and 70’s. Today this branch of the Synges is scattered across the US, including New York, New Jersey and California.

Lizzie was the one who kept in constant touch with home, passing news of the family from 1 side of the Atlantic to the other. Often she had to break bad news of the early deaths of her sisters and brothers, but her letters were always greeted with great excitement. When her father died in 1918 she continued to write to her brother Martin, who by then was married to Bridget (Delia) Mitchell from Dunmore, and had inherited the farm and the weaving business. This was a time of national upheaval in Ireland. In 1919 the Black and Tans, British ex-servicemen, were recruited into the RIC and they quickly became renowned for the burning of homes, shops and creameries. Supposed nationalist sympathisers were routinely abducted and killed. Tuam was particularly affected. A story we were told as children was that 1 day when the Black and Tans were rounding up local men to build an ambush for flying columns of nationalist rebels they arrived in Synges’ street and ordered Martin, at gun-point, to come with them. He lay face down on the ground and refused to go. It was only when they turned their guns towards his baby son Paddy in his mother’s arms that Martin relented

In the midst of this upheaval normal life went on. Each year the letter from Lizzie with the money in it ‘to buy Christmas’ would arrive and this would signal a trip to Tuam by Bridget to do just that. She would leave the ass and cart in the Shambles, a large open space near the railway station used for fairs. Having taken the ass from under the cart, she would tie him to it, or to a halt and leave him with a nosebag with a bit of hay in it. She would sell turkeys and buy a goose and all the provisions for Christmas. At Christmas she lit the fire in the bedroom that her daughters May and Rita shared, they would lie watching the coals glow and shimmer in the darkness. One Christmas their older brother John decided that he would take the place of Santa and when they were asleep he left raw potatoes in their stockings hung at the end of the bed.

Rita goes to work in Tuam

In 1934, when she was 14, Rita was sent to Miss Nolan in Tuam as an apprentice dressmaker for 3 years. She was allowed home every 2nd Sunday when her brother Paddy would cycle in and bring May’s bike for her to ride the 6 miles home. In the evening he would do the reverse journey to leave her back. This was during the period of the Economic War, launched by Irish Government on Britain. In an attempt to reduce the need for imports the sugar beet industry was 1 of those expanded. During the harvest time the trucks would roll into Tuam beet factory to keep the production of sugar going around the clock. The young men on the trucks would throw down beet at Miss Nolan’s apprentices, out for their evening walk from 7.00 p.m.– 8.00 p.m., and the girls would throw it back shouting and laughing. Many years later Rita said that this gave her more confidence with people. At the age of 17 she was sent on her own to a dressmaking job in Madame Josephine’s in Nassau Street, Dublin. She never lived at home again.

John inherited the farm in 1963. It was now around 35 acres and weaving was no more. The remains of the old loom stood silent in the cart house. Rita was married in Dublin to Joe Fitzpatrick and they had 5 children; Breda, Eileen, Paul (1955-1972), Joe and Martin. May married Paddy Gormally and they had 2 children, Brid and Dolores. Every summer we the ‘Jackeens’ arrived in Synges for a month and felt like we were coming ‘home.’ During the 1st days certain visits were made. The 1st was usually to Mannion’s shop where Christy would tell us the story of how, in the early hours of 1 dark wet morning many years before, he had seen a stranger getting out of the lorry delivering newspapers. The man seemed to be waiting for someone as he stood in the pouring rain. Christie took him in, sat him by the fire and gave him warm tea and fresh soda bread. When John Synge arrived in Christie’s shop, Joe Fitzpatrick was sitting by the fire warm and fed. ‘And that’s how I was the 1st person in Barna to meet your father,’ Christie would say gleefully. We would always leave Mannions with our mouths and pockets filled with Scott’s Clan or Oatfield toffees. Granny Fagan, who was tiny with a bun at the back of her head and called everyone ‘a stóirín’ and Frank, John and Annie Keane were also paid visits and again we never left their shops without a fistful of sweets.

After 2 weeks Joe would return to Dublin and we would spend our days following John around. To wake in the morning to the sound of the cart wheels grinding on the pebbles outside was a signal to get up before John left without us, wherever he was going. There was 1 occasion when he took Brid and me to the bog to get a cart load of turf. When he got out of the cart to talk to another man on the way in, Brid and I were anxious to show we could handle the ass. Well, we couldn’t. When John went to get back into the cart we had managed to drive the ass up on the ditch with the cart perched at a perilous angle behind him and the 2 of us afraid to move. Other treats were to go to the Scárdán for water, help with the hay, herd sheep, and best of all, to sneak down to Gormallys where May always treated us to tea and fruit cake. Then there were the evenings when the Gormallys came to Synges and we often spent hours playing 25, Snap, or Old Maid.

During these years we all absorbed the sense of belonging to a long line of Synges who were resilient under pressure, loyal to family, hardworking and with a mischievous streak.

Joe and Ger Fitzpatrick, The Present

Today, the next generation and their children are hearing the stories of their forebears and while they are communicating with emails, Facebook and mobile phones the Synge house is still the centre that we all gravitate towards. John once said that when our generation got older we would lose interest in the place. Thankfully he was wrong; ní thugamar cúl le dúchas.’ I am confident that the same will go for the next generation and their children[1].