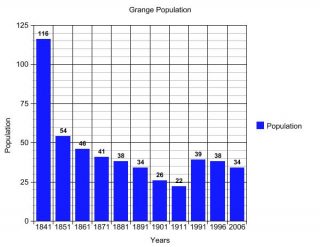 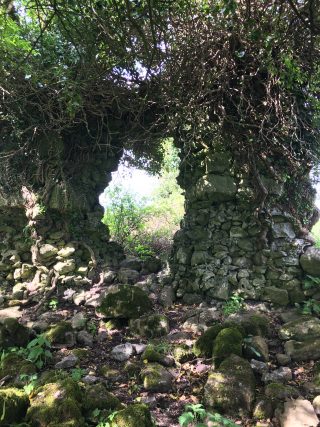 Entrance to the church in Grange
Photo: B. Forde, May 2020 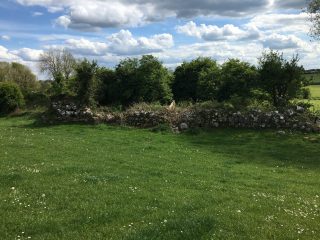 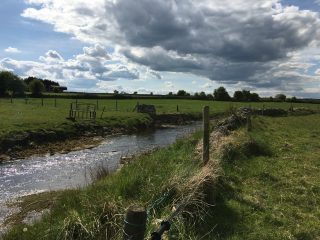 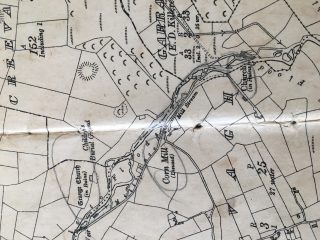 OS Map sheet 44 showing the location of ruins of Grange Church
Photo: B. Forde, May 2020

Grange, An Ghráinseach,[1] “the Grange” (a place for storing grain)[2]

There were 9 occupiers listed in Griffith’s Valuation in Grange in 1855. Hugh Henry retained 2 areas of land, 1 measuring 33 acres, 0 roods and 23 perches and another measuring 34 acres, 2 roods and 4 perches for himself at an annual valuation of £37 0s 0d. All of the remaining tenants leased their land from Hugh Henry including John Monaghan, Thomas Loughan, James Nolan, John Nolan and Peter Joyce all of whom leased 2 plots including ground listed as ‘common’ measuring 56 acres, 2 roods and 11 perches. Michael Farrell and William Wills also leased a house and land while Michael Farrell leased a corn mill along with the offices and land. Outside of the common ground mentioned above, the largest area was leased by William Wills measuring 56 acres, 0 roods and 31 perches including a house, office and land.

was a widow aged 59. Catherine lived with her children: Martin aged 28, Mary aged 25 and John aged 23. This family lived in a 2nd class house with 3 front windows where 4 people lived in 3 rooms.

was a widower aged 65. William lived with his children: Patrick aged 27, Ellen aged 21, John aged 17 and Martin aged 15. This family lived in a 2nd class house with 6 front windows where 5 people lived in 6 rooms.

aged 55 was married to Ellen aged 55 also. Their son Patrick aged 28 also lived in this house. This family lived in a 2nd class house with 3 front windows and 3 people lived in 3 rooms.

aged 64 was married to Sarah aged 60. Their son Patrick aged 32 also lived in this house. This family lived in a 2nd class house with 3 front windows and 3 people lived in 3 rooms.

was a widow aged 65. Catherine lived with her sons; Thomas aged 45 and James aged 40. This family lived in a 3rd class house with 2 front windows where 3 people lived in 2 rooms.

All occupants of this townland owned the land on which their houses stood. All of the houses were of thatch with the exception of Catherine Madden’s and William Burke’s whose houses were roofed with slate. William Burke had the most number of out-houses listed on the 1901 census – 5 in all. John Lohan had 4 out-houses listed in the census, Lawless, Craven and Madden recorded 3 out-buildings while Francis Monaghan had 1 out-house.

Those listed in 1901 recorded their place of birth as ‘Co. Galway’ and all adults were listed as ‘farmer’ with the exception of Martin Madden, son of Catherine who recorded his occupation as ‘water bailiff’ and was probably responsible for enforcing any laws that may have existed in relation to management of the river, fishing, dams and weirs.

Oldest person in the townland in 1901

The oldest person in the townland in 1901 was Honor Joyce aged 80. Honor was a cousin of Thomas Craven and a widow. Honor lived in this house with Thomas, his wife Mary and their children John, Mary, Stephen, Delia and Lizzie. The youngest person in Grange in 1901 was Lizzie Craven, aged 4.

was a widow aged 77. She lived with her son James aged 27, daughter-in-law Ellen aged 36 and grandson, Patrick who was less than 1 year old.

aged 68 was married to Ellen aged 71. They lived with their children: Patrick aged 39, and their daughter, Bridget Quinn who was a widow aged 38. Their grandson, Michael Quinn aged 2 also lived with them.

was a widower, aged 78. He lived with his son, Patrick aged 40 and daughter-in-law Margaret aged 35.

All adults listed in the 1911 census were recorded as ‘farmer’. All occupants of the townland listed their place of birth as Co. Galway, with the exception of John Creaven, a farmer’s son aged 38 who was born in England and Michael Quinn aged 2, son of Bridget, who was born in New York.

Oldest person in the townland in 1911

The oldest person in the townland was John Lohan, a farmer aged 78. The youngest person in Grange in 1911 was Patrick Lawless who was less than 1 year old. From the information provided, Ellen and Francis Monaghan were married for the longest time; 45 years in 1911. This couple had 8 children in total and 8 still living in 1911.

The bar graph below plots the changes in population in this townland between 1841 and 2006 according to census information.

The Ordnance Survey (OS) map (1837-1842)[15] shows the main road dissecting the townland at the centre travelling in the direction of Creevaghbaun to Addergoole. The Grange river also flowed through the townland in the northeast towards stepping stones and a dam at Togher Beg in the west. A tributary flowed in a southerly direction just after Grange bridge and met the main river again in the southwest of the townland where it continued along the southern boundary of Grange.

All of the houses evident on the early map were situated on the left hand side of the main road mentioned above. There were only 2 buildings in the north of the townland, near the border with Addergoole in the west, located across Grange bridge, at the southernmost point of the townland where an eel weir was evident. Beside these ruins, a children’s graveyard was sited and the ruins of a church.

A comparison between the OS 25 inch map 1888-1913[16] and the OS Aerial map 2005[17] shows how the landscape and geography of the area has changed. The 1888-1913 map shows three springs in the north and west of the townland. A lime kiln was located close to Grange bridge on the southern side of the river. A large area in the south west of Grange where the river flowed and marked the border with Togher Beg, was liable to flooding and the old church and infants’ graveyard lay just to the northeast of this flood plain. Further south at the boundary with Garraun and Coolrevagh a number of corn mills and sluices were located.

The modern day OS 2000 and 2005 maps show that some of the modern houses are situated on the same sites as those mentioned on the early maps, although there are fewer buildings evident in the more recent maps. Where previously there were up to 19 buildings on the left hand side of the road from Creevaghbaun (now the R332), there are today only 9 buildings. On the Tuam side of Grange bridge, where in earlier times there were only 2 buildings, there are now 5 houses with a number of sheds and out-buildings. In the west of the townland, the Grange river no longer flows into the neighbouring townlands but turns south and still marks the border of the townland in the south.