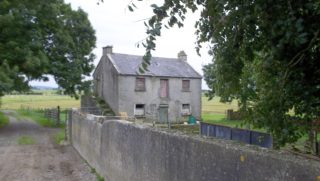 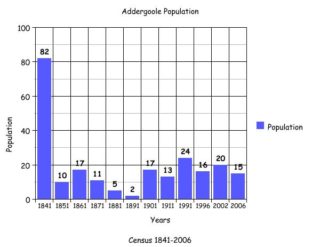 According to O’Donovan’s Field Name Books 1830, early references to ‘Adregowle’ and ‘Adragoil’ were found in the Chancery Inquisitions of Elizabeth I (1558-1603); to ‘Adregowl’ and ‘Adragule’ in the Chancery Inquisitions of James I (1603-1625) and references to ‘Adragail’ in the Chancery Inquisitions of Charles I (1625-1649)[4]. Another form of the name, ‘Adrigoole’ was found in the ‘Map of Property Surveyed in 1813 and 1814’[5]. Larkin’s County Map of Galway (1819) refers to ‘Addragool’ while the Boundary Survey Sketch Maps completed during the field names survey (which began in 1824) and officiated by John O’Donovan (1806-1861) and others[6], cited the spelling as ‘Addragool’. The Survey Notebooks themselves make reference to ‘Addragoole’ in the English and ‘Eadargabail’ in the Irish and state the local pronunciation in Irish as ‘Eadra gcúil’[7]. The townland is described as the property of H.R. Henry, Esquire, England, containing ‘151 ½ statute[8] measure including about 40 acres of bog’.[9] Today, locally, the townland is spelt, ‘Addergoole’.

Hugh Henry owned all of the land in the townland in 1855. Henry held a herd’s and cottier’s house, office and land for himself measuring 151 acres, 1 rood and 39 perches at a valuation of £42 0s 0d. The area on which the National School stood was also held by Henry though no detail is given as to the area of this land. The school building was valued at £2 10s 0d. Henry owned vast areas of land in the parish of Killererin amounting to over 6,000 acres, including land in the townlands of Toghermore, Togherbeg, Tigreenaun, Shantallow, Pollbaun, Pollacapple, Omaunmore, Omanbeg, Lissavalley Glebe, Lissavalley, Lissnaminaun, Kilmore, Killeighter, Grange, Creevaghbane, Corskeaghmore, Corskeaghbeg, Corralea, Cornacartan, Coolrevagh, Cooldorragha, Cloonreddia, Cloonconra, Carrowgorm, Barnaderg and Ballynakilla. This land was valued at £2061 15s 0d.

There were 2 people living in 1 household in Addergoole in 1891.

There were 17 people living in Addergoole in 1901.

Timothy Moran also lived in a 2nd class house on land owned by Cecil Henry. (Cecil Henry was a grandson of Hugh Robert Henry mentioned earlier in Griffith’s Valuation. Over 600 acres belonging to Cecil R. Henry ‘were vested in the Congested Districts’ Board in April 1914’[15]).  There were 7 people living in the Moran house, including Head of Family, Timothy, aged 67 who was a widower; his son John, aged 31 and daughter-in-law Bridget, aged 30; grand-son Timothy, aged 9, grand-daughter  Mary, aged 5 and grandson Michael, who was less than 1 year old. Both families lived in 2 rooms in houses with 2 front windows.

Addergoole National School was also recorded on the Census, and it too was located on Henry land.

All of the residents of Addergoole listed their place of birth as ‘Co. Galway’ and all of the children were listed as ‘scholars’. Both John Moran and Timothy Moran listed their occupations as ‘shepherd’. Pat Kelly, Head of Family did not have an occupation recorded on the Census in 1901.

The oldest person in the townland was Timothy Moran, aged 67 and the youngest people were Michael Moran and William Kelly, aged less than 1 year old.

There were 13 people listed in the Census in 1911. These included the following Heads of Household: John Courtney, Patrick Langan, Honor Stone and Patrick Lowry.

John Courtney lived in a 2nd class house on land he owned. John was aged 56 and was married to Margaret who was aged 46. The Courtney house also included sons James, aged 11, Bartley, aged 9 and a daughter Mary, aged 7. Patrick Collins, a farm servant also lived in John Courtney’s house.

Patrick Langan lived in a 2nd class house on land owned by Cecil R. Henry. Patrick, aged 40 was married and lived with his widowed mother, Mary, aged 80 and his sister Delia, aged 35.

Honor Stone, aged 55 lived in a 2nd class house also on land owned by Henry and was unmarried.

Patrick Lowry lived in a 2nd class house on land he himself owned. Patrick, aged 72 was a widower and lived with a son, Thomas, aged 33 and his daughter-in-law Mary, aged 33.

All of the families on the 1911 Census listed their place of birth as ‘Co. Galway’. Unusually there were a number of varying occupations listed in this townland. While many townlands were occupied by farmers, in this townland, Honor Stone was listed as a ‘gate keeper’, Patrick Langan a ‘herd’ and Patrick Collins as a ‘farm servant’.

The oldest person in the townland in 1911 was Mary Langan, aged 80, who was a widow and the youngest person was Mary Courtney, aged 7, daughter of John Courtney.

The bar graph in this document plots the changes in population in this townland between 1841 and 2006, according to census information[17].

The Ordnance Survey (OS) Maps (1837-1842)[18] shows that there were stepping stones and eel-weirs to the south of the townland on the river bordering the townland of Grange. The main road to Tuam also passed along the southern boundary from the east, at Grange, through to the west into Carrowmoneen. There were no houses evident in the north-western part of the townland; all dwellings were located towards the south, close to, or with access to the road. Outside of this large area, all of the remaining land was divided into small plots.

A comparison between the OS 25 Inch Map (1888-1913) and the OS Aerial Map[19] (2005) shows how the landscape and geography of the area have changed. The (1888-191 Map, shows that a spring existed in the centre of the townland and Addergoole National School was located just off the main road, and just north of the stepping stones shown on the earlier map.

By 2000 the large area of land in the north-west of the townland mentioned above, was planted with forestry. The stepping stones and eel-weirs are no longer visible, and in fact, that tributary of the river no longer flows along the southern boundary of the townland. A dam that was also visible in the early map further south of Addergoole in the townland of Togherbeg was a green field in 2005. Today there are 4 houses in this townland mostly located along the road to Tuam.

[10] ‘Table VII –Area, Out-offices and Farm Steadings and Population together with the Valuation of  Each Parish, Townland and Township of the County of Galway in 1881’ (James Hardiman Library, National University of Ireland, Galway, p56)

[12] ‘Table VII –Area, Out-offices and Farm Steadings and Population together with the Valuation of  Each Parish, Townland and Township of the County of Galway in 1881’ (James Hardiman Library, National University of Ireland, Galway, p56)

[13] Census of Ireland for the Year 1911 [Province of Connaught, County of Galway] Area, Houses and Population, ‘Table VII-Area Houses Out-Buildings and Farm Steadings, and Population together with the Valuation of Each Poor Law Union, Dispensary District, Electoral Division, Townland in the County of Galway in 1911’ (Galway County Library, p110)

[14] The National Archives of Ireland, ‘Census Ireland 1901’, (http://www.census.nationalarchives.ie/search/results.jsp?census_year=1901&surname=&firstname=&county=Galway&townland=Addergoole&ded=Killererin&age=&sex=&search=Search&relationToHead=&religion=&education=&occupation=&marriageStatus=&birthplace=&language=&deafdumb=&marriageYears=&childrenBorn=&childrenLiving=) (May 2011)

[16] The National Archives of Ireland, ‘Census Ireland 1901/1911’, (http://www.census.nationalarchives.ie/search/results.jsp?census_year=1911&surname=&firstname=&county=Galway&townland=Addergoole&ded=Killererin&age=&sex=&search=Search&relationToHead=&religion=&education=&occupation=&marriageStatus=&birthplace=&language=&deafdumb=&marriageYears=&childrenBorn=&childrenLiving=) (May 2011)