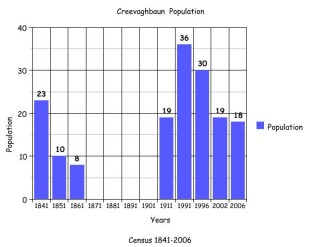 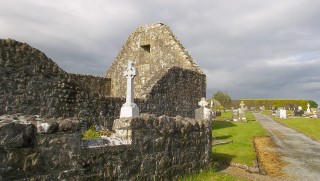 According to O’Donovan’s Field Name Books 1830[4], early references to ‘Crwaghbane’ were found in the Chancery Inquisitions of James I (1603-1625). Reference is also made to ‘Creevaghbane’ in the Map of Property Surveyed in 1813 and 1814, to ‘Creevabawn’ in Larkin’s County Map of Galway 1819 and to ‘Creevaghbawn’ in the Boundary Survey Sketch Maps[5]. According to P.W. Joyce’s Place Names ‘Craobh’ [crave] signifies either a branch or a large wide-spreading tree. The name was given to large trees, under whose shadows games or religious rites were celebrated, or chiefs inaugurated; we may conclude that one of these trees formerly grew wherever we find the word perpetuated in a name. There are more than 30 townlands called ‘Creevagh’, i.e. branchy or bushy land.[6]

There were 3 households and 23 people living in Creevaghbaun in 1841 and this population decreased by over half to only 10 people living in 2 households in 1851. The total area of land in the townland was 150 acres, 2 roods and 22 perches with an annual valuation of £51 0s 0d.

Hugh Henry retained all of the land in this townland for himself, including a house and land measuring 150 acres, 2 roods and 22 perches.

There were no residents in this townland in 1891.

There is no record of any residents in Creevaghbaun in the census of 1901.

There were 19 people living in Creevaghbaun in 1911.

Mary Donohoe was married for 36 years and had 6 children and 5 still living in 1911.

Peter Healy, mentioned above, aged 17 in 1911, may have been born in the townland of ‘Caheragry’, the son of Michael and Honor Healy.

All of those listed, recorded their place of birth as Co. Galway and all had farming-related occupations.

The bar graph above plots the changes in population in this townland between 1841 and 2006 according to census information[15].

The Ordnance Survey (OS) maps 1837-1842[1] show 2 ringforts in the area at the centre and southwest of the townland. A trigonometrical station was also located in the west. Directly east of this, Creevaghbaun Church (in ruins) and burial grounds were located. The neighbouring Holy Well and Sweat House (Teach Allais) are officially located in the townland of Kilmore. (However, locally today, the Sweat House is always referred to as being in Creevaghbaun). Towards the centre of the townland, a lime kiln was also situated.

A comparison between the 25 inch map 1888-1913 and the Aerial map 2005[2]shows how the landscape and geography of the area has remained the same. The 1888-1913 map, again shows the ringforts, church and burial grounds. An area in the south of Creevaghbaun is shown as boggy or marshy ground. There are no houses in this area, which borders northern Garraun, an area historically liable to flooding. The modern photographic map shows that 8 houses have been constructed along the main road, that is, the R332 close to the church and burial grounds. The south of Creevaghbaun remains free from housing or out-buildings of any kind.

The ruins of Creevaghbaun Church still remain and the burial ground is still used occasionally to the present day. The Church and Burial Grounds are located approximately 6.5km from Tuam on the right hand side of the road travelling towards Barnaderg North in a field about 200m off the road. The Church was built in 1332 by the De Burgo family and 400 years later the site was used as a restored Carmelite Convent[3].

An excavation conducted in 1989 showed the foundations at the north wall, and later work showed that a sacristy existed at the north end. According to the excavation Report, the interior of the church:

…measures 14.5m x 6.2m but some of its area is taken up by the tombs and crypts, built against the east gable and the south wall and these date to the early 19th century. Stray finds include fragments of clay pipe, iron slag and quern stone. Creevaghbaun Carmelite Friary was founded around the middle of the 14th century by the De Burgos[4].

Peter Harbison, writing in ‘A Thousand Years of Church Heritage in East Galway’, describes the church where there are unusually, 2 doorways, one each in the north and south walls. There are also a number of large vaults near the east of the church. There is an inscription beneath the window of the 2nd vault that says:

I.H.S. This tomb was erected for the rev. Frs. of Criuaughbane by ye Rev. Will Barry, Grand Nephew to ye Revd James Barry Foundr of sd Convent Anno Domino 1780[5]

Today the burial grounds are reached by a short lane from the main Tuam-Dublin Road.