Extract from chapter in Killererin - A Parish History 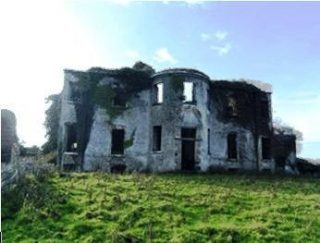 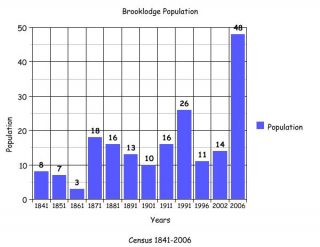 According to O’Donovan’s Field Name Books 1830[5] the townland of ‘Brooklodge’ is mentioned in William Larkin’s County Map of Galway 1819. The Boundary Survey Sketch Maps completed during the field names survey (which began in 1824) and officiated by John O’Donovan (1806-1861) and others[6], cited the spelling of the townland as ‘Brooklodge Demesne’. The Pettigrew and Oultan, Dublin Almanac and General Register of Ireland 1835, a general register of all officials and administrative offices in Ireland, including fairs, the postal service, the legal establishment, banks, colleges, railways, and listings of all officials for every county and town in Ireland, cited ‘Brook Lodge’ in its listings. Thomas Gilmore, Proprietor’s Tenant is also referred to as an ‘authority source’ on the spelling of the townland as ‘Brooklodge’. Today, locally, the townland is spelled, ‘Brooklodge Demesne’.

The townland is described as the property of Martin Blake and contained 204 acres, 2 roods and 20 perches ‘statute[7] measure including a large area of plantation and some arable land.[8] Blake owned land in other parts of the parish including Cloondahamper, Coolfowerbeg and Ballynapark.

All of the land on which the houses were built was owned by Robert Blake although Blake doesn’t seem to have been resident there at that time. John Kennedy and Timothy Nally lived in 2nd class houses and in the Kennedy house 5 people lived in 4 rooms. In the Nally house, 4 people lived in 4 available rooms. James Conaty, the game keeper lived in a 1st class house. In this house James lived alone occupying 2 rooms.  This house had 12 front windows and was constructed from stone with a slate roof and so was probably Brooklodge House.

There was only 1 occupier of land in Brooklodge in 1855. Martin J. Blake leased a house, offices and land from the Trustees of Dominick D. Skerritt measuring 204 acres, 1 rood and 27 perches at an annual value of £125 0s 0d. In the 1830s the land in this townland belonged to the Blake Family. Brooklodge, near Ballyglunin, was Skerritt property during 1855 but was held by the Blake’s of Ballyglunin on a lease dated 1775[11]. This may explain how this land in 1855 was held by Blake.

Head of family aged 56 was married to Mary aged 55. John and Mary lived with their children: Michael aged 22, John aged 18 and Mary aged 15.

Aged 34 was unmarried and lived alone. James Conaty was a gamekeeper. There were a number of out-buildings also listed by James Conaty, including 4 stables, a coach house, harness room, 2 cow houses, a piggery, a fowl house, boiling house, turf house, shed and laundry.

All of those listed recorded their place of birth as ‘Galway’ with the exception of James Conaty, who was from Co. Cavan and Anne Nally who was from Co. Mayo. There were no farmers listed in this townland.

Were carpenters. Both the Kennedy and Nally houses had 4 front windows and between them they had 7 outhouses. Both listed a cowhouse, piggery and fowl house while John Kennedy also held a stable.

Youngest and oldest persons in townland

The youngest person in the townland in 1901 was James Nally, aged 1 year and the oldest was Anne Nally, aged 70.

John Kennedy aged 68 was married to Mary aged 67. John and Mary lived with their children: John aged 27 and Mary Ellen aged 24. They were married for 38 years and had 6 children with 3 still alive in 1911.

James Conaty aged 32 was married to Maggie. James and Maggie lived with their children: Bernard Maurice aged 7, Mary Ellen aged 5 and John James aged 1. They were married for 10 years and had 4 children with 3 still living in 1911.

Thady Nally was listed as head of the Nally family in 1911. Thady was aged 45 years and he was married to Mary aged 34. They lived with their children: Jemmie aged 11, Paddy aged 9, Timothy aged 7, Michael aged 5 and Martin aged 3. They were married for 12 years and had 6 children and 5 still living in 1911.

All those recorded, listed their place of birth as Galway, with the exception of James Conaty from Co. Cavan and Maggie Conaty from Co. Waterford. Other occupations recorded in the townland included: Thady Nally, who was a shepherd and Mary Ellen Kenney, a telegraphist.

The bar graph accompanying this article, plots the changes in population in this townland between 1841 and 2006 according to census information[16].

The Ordnance Survey (OS) Maps (1837-1842)[17] show that the townland of Brooklodge is triangular in shape and bordered entirely on the south by the Abbert River[18].  Along this southern border, a waterfall was located and the map also refers to a ‘line of inundation’. At the southern-most point, to the west of the waterfall a Roman Catholic chapel and schoolhouse were located. Slightly further north of the chapel was Brooklodge House itself surrounded on its western side by planted garden and forestry.

According to NUIG Landed Estates Database, Brooklodge ‘was leased to Christopher French by Ambrose Deane on 16 June 1775 for 1 life and 99 years. He built a house which later became a Blake residence held from the trustees of Dominick D. Skerritt, who had inherited it from the Deanes’[19].

Griffith’s Valuation, 1855 indicates that Martin J. Blake leased the house, out-offices and land from the trustees of the Dominick D. Skerritt estate.

The National Inventory of Architectural Heritage describes Brooklodge House as a ‘detached five-bay, two-storey country house, built c.1770, with a half-basement, bow-fronted entrance bay and having slightly projecting end bays. There was a four-bay, single-storey wing to the northwest with half-basement and stone chimney-stack, and two-storey projecting bay with semi-basement to the southwest. It is now in ruins and partly covered in ivy’[20]. This inventory, that aims to identify and record the architectural heritage of Ireland from 1700 to the present day states that this building sits as a centrepiece of other important structures in the landscape including the ice house and chapel built in a gothic style. All of these buildings give a very clear indication of the type of lifestyle enjoyed by those living in the house.

On the eastern side of the house, a canal ran dividing the house and its grounds from the heavily forested areas at the centre and northern parts of the townland. To the northwest of the house an ice house was situated. The ice house, now largely in ruins was built in approximately 1770 as a modern day refrigerator, allowing food to be kept fresh for the family in Brook Lodge[21]. On the northern side of the canal close to the forested area, a small circular grove of trees stood. a trigonometrical point was situated near the northern-most tip of Brooklodge

A road leading from the ice house and Brook Lodge led to a small junction, where a building was located. This building is possibly the Post Office at Ballyglunin and it is also shown on the later 1881-1913 map facing the townland of Coolfowerbeg across the road, an area historically liable to flooding. The Post Office is still in operation today.

A comparison between the 25 inch map 1888-1913 and the Aerial 2005 map,[22] shows how the landscape and geography of the area has largely remained the same. The 1888-1913 map shows an infant’s burial ground located just outside Brooklodge on the border with Coolfowerbeg. In the west of the townland, the Pallas Bridge spans the Abbert River from Brooklodge into Pollawarla in the east. The Bridge was built in approximately 1880, probably from stone from an older bridge dating from approximately 1800. The bridge was constructed from limestone with 5 arches[23]. Another bridge carried the Demesne Road across the River Abbert and this single arch structure was built in approximately 1770[24]. Much of the northern portion of the townland continued to be covered with forestry as shown in the earlier 1842 map. Brooklodge House, the Chapel, school buildings and the ice house were also indicated on the later map.

The Aerial map 2005 shows that a portion of the north of Brooklodge is still forested as are small parts of the south. Brooklodge House is surrounded by green fields and the house itself is in ruins. The northernmost part of the townland is being used as a quarry. According to the Street map, Ballyglunin Post Office is situated within the townland of Brooklodge near a small junction. Heading south at this junction leads past a new housing development along a narrow road into Brooklodge Nursing Home.