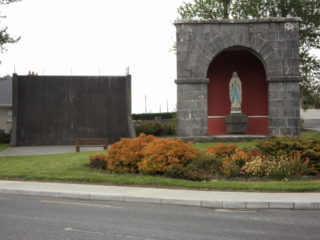 Madonna and Child - a copy of which was used in the Grotto, Barnaderg 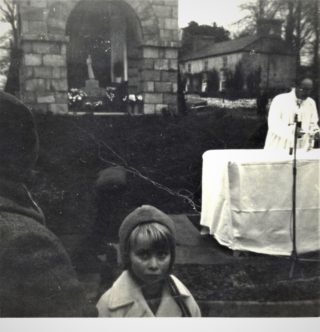 This freestanding square-plan ashlar limestone arched canopy, was built c.1830 and removed from elsewhere and re-erected possibly in Marian Year 1954 to shelter statue of Blessed Virgin Mary. Round arches to 3 sides with dressed voussoirs and imposts, and with coping course. Flat roof to canopy. Statue stands on octagonal limestone plinth and whole stands in triangular green at centre of village of Barnaderg.

This fine limestone canopy is very well crafted and has good detailing. It was brought from elsewhere in the mid-twentieth century and houses a religious statue, thus acting as a religious focus and a decorative focus for this small village.

Categories of Special Interest ARCHITECTURAL SOCIAL  Rating Regional
Original Use monument  In Use As monument.

Additional information on the Grotto, Barnaderg.

In 1968, Fr. Patrick Jennings, P.P. Killererin, decided to demolish the market house in the village of Barnaderg.  With the help of some parishioners, it was re-erected at a higher level as a shrine to Our Lady.  They raised the height of the building by about 3ft. but retained the fine limestone masonry, carefully replacing the arches and restoring the parapet as it probably looked when it was first built.

Patrick Duffy (Lavally), who also built the Garda barracks in Barnaderg was the stonemason and Daithí P. Hanly, Architect, Dublin and a native of Barnaderg, prepared the plans. Daithi Hanly was also the architect of the Basilica in Knock and the Garden of Remembrance in Dublin.  A casting in re-constructed stone was made in 1968.  Mr. Hanly presented a copy of the statue of the Madonna and Child, a piece of sculpture which was exhibited at the Dublin Municipal Gallery in 1957, to the parish. The fine casting of the figure was executed by Comdt. Maurice F. Cogan, of Dalkey, Co. Dublin.

With the help of local volunteers such as John Keane, Barnaderg, Paddy Synge, Lissavalley and Joe King, who drew stone from the church yard to the village, the work was finally completed. Joseph Walsh, D.D. Archbishop of Tuam celebrated Mass and blessed the shrine on 8th December 1968

This information is published in Killererin – A Parish History which is available for purchase elsewhere on this site.