You are here: Home>People>Obituaries>Thomas Hanley 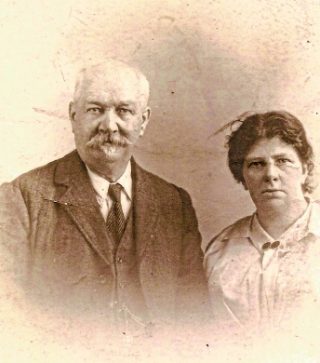 This photo shows the memoriam  bookmark for Thomas Hanley who came from Hillsbrook and later emigrated to England.

Before his death, Thomas Peter Hanley lived in Kent, in the United Kingdom and his paternal great grandfather was from Hillsbrook, Killererin[1]. The 1901 census records Thomas Hanley, Head of Household, aged 60 years who was married to Bridget. Their children and grandchildren lived with them as did their son-in-law Michael Byrne; their daughter Mary and grandchildren Bridget and Patrick. The 1911 census shows that by that time Thomas was deceased. Thomas and Bridget had been married for 18 years.

Thomas and Bridget’s son, Thomas married Mary Jane Pickup on 11th May 1886. At this time Thomas was working as a labourer. Later in the 1911 Census of England and Wales, his occupation is recorded as a ‘Stationary Engineerman’ in a Paper Mill. In 1911 he and Mary Jane were married for 9 years and had 6 children, 3 still living – Thomas, Annie and Nora. His place of birth was recorded as Tuam, Co. Galway while his wife Mary listed her place of birth as Lancashire, Blackburn. Their children were born in the UK and Mary’s brother William was listed on the Census with them in 1911.

Thomas’ grandson remembers family stories that referred to Thomas’ brothers, (whose first names are unknown) both of whom were said to have perished in the San Francisco earthquake of 1906. Sadly nothing more is known about these men.

Service in the Connaught Rangers

Thomas served in the Connaught Rangers and he died on 30th December 1929 aged 69 years. He is interred at St. James’ Church, Brindle.