You are here: Home>Topics>Wind Energy in Killererin 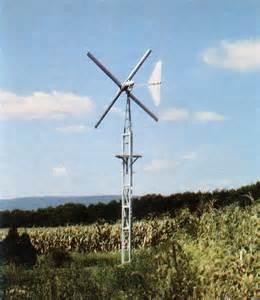 With all the talk there is nowadays about clean energy from the wind and the tides and that great word: “biomass”, it is interesting to recall Jim Conroy, my Dad, of Brierfield N.S. and Garra/Cahergal N.S. was one of the pioneers of wind energy in the parishes of Killererin and Abbeyknockmoy with a few others in the district.

When the Second World War of l939/l945 began to squeeze this island country, imports from abroad were drastically restricted. However, a cargo of Wind-chargers did make its way to Dublin Port to the firm of Kelly and Shiels, and some of these were sold in Tuam or Galway.

It was a simple idea – a dynamo operated by a wind-driven propeller. This was attached to the top of a tall steel tower or pylon firmly anchored in concrete. I think Daddy bought his one from Denis and John Clarke, motor dealers and mechanics in Tuam. Anyway it was John and some of his men who erected our one in the garden of the residence in Horseleap. Wires from the dynamo brought the current down along the tower and then into the house to a set of heavy duty batteries. I well remember John Clarke, a strong powerfully-built man, having a meal in our stone-flagged kitchen. He had a nice voice; as he was taking the top off a hard-boiled egg I remember him singing to himself the song “Can I forget you, or will my heart remind me etc.

The Wind-charger was great during the winter, and indeed all year round for that matter, as we are not short of wind in this beloved island; but there were times in any season when you could have periods of calm. The heavy batteries were supposed to carry you over these calm periods, and generally speaking, they did, but not always, and in that case, we had to return to the oil lamps, some very ornamental, or a petrol-fuelled pressure lamp which my father had – something like the later Tilley lamps and lanterns.

When they had to be shut down

The ironic thing about those Wind-chargers was that when the wind was really strong such as during a storm, the propeller had to shut down, either by a braking device operated by a lever at the bottom of the tower, or by a device which turned the tail vane sideways so that the dynamo-propeller wouldn’t be facing into the wind. My uncle Gerry Conroy, who was a bit of an engineer and amateur inventor in his spare time, spent hours trying to design a wind-power dynamo which didn’t have to be shut down when the energy potential of the wind was at its maximum.

At that time there were not many radios, or wirelesses as they were called, but Daddy built a simple one from instructions in a technical magazine and materials he bought in Felons’ shop in Dominick Street in Galway. Later on, he got a “shop wireless”. This was powered by a large “Full of Power” dry battery, and a small wet battery.

I often think that if Daddy hadn’t been a teacher, he would surely have been a mechanic or a radio man. The dry battery could last for weeks and weeks, but the wet battery had to be recharged. There were places in Tuam and Galway which provided this service. However, one of the advantages of the Wind-charger was that you could charge the wet batteries using some sort of special attachment, and Daddy regularly charged wet batteries for the neighbours. Needless to say, not in a thousand years would he ever have taken any payment for this, as in Brierfield, Horseleap and Garra neighbours helped each other in whatever way they could, and that’s the way it was, as in all parts of Ireland. Anyway, apart from any other consideration, as Daddy used to say “Sure, isn’t all that power coming from the Lord himself through the wind he provides!