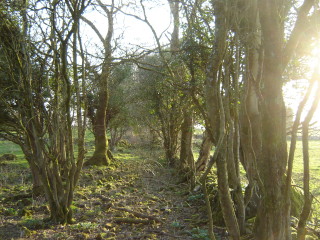 Site of old church at Farrells' land in Coolreagh 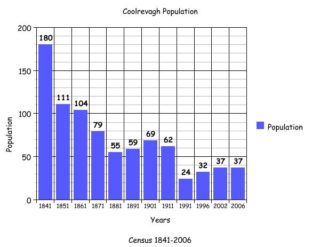 According to O’Donovan’s Field Name Books 1830[3], early references to ‘Cowlreogh’ were found in the Chancery Inquisitions of Elizabeth I (1558-1603) and to ‘Coolereogh’, ‘Culereagh’ and ‘Coulreagh’ in the Chancery Inquisitions of James I (1603-1625). Reference is also made to ‘Coolrevagh’ in the Map of Property sin 1813 and 1814 and to ‘Coolrevagh’ in the Boundary Survey Sketch Maps[4]. Today locally, the townland is spelled ‘Coolreagh’.

Most of the land in this large townland was leased from Hugh Henry, with the exception of a house and land retained by Henry himself amounting to 62 acres, 1 rood and 0 perches and an area consisting of 22 acres, 1 rood and 10 perches leased by Patrick Hughes from Edmund McHugh. This plot contained a house, out-offices and land. Others who occupied and leased land in Coolrevagh included Michael Coleman, Edmund Coleman, James Ward, Patrick Hughes, Michael Farrell, Hugh Henry, Thomas Kelly, Henry Tighe, John Dunleavey, Thomas Stephens, Patrick Nolan, Patrick Hughes, Patrick Nolan, Thomas Kelly, and William Laffey.

In 1891 there were 12 houses listed on the census with a population of 59 people.

There were 12 heads of family listed in Coolrevagh in 1901.

Honor Coleman was a widow, aged 60. Honor lived with her son Michael aged 36, daughter-in-law Honor aged 30 and her grandchildren: Mary aged 5, Bridget aged 2 and Walter who was less than 1 year old.

Thomas Burke aged 70 was married to Margaret aged 65. They lived with their children: Bridget aged 31, Thomas aged 29 and Peter aged 26. Annie Farrell aged 19 was a grandaughter of Thomas Burke and also lived in this house.

Like many other townlands in the parish, Coolrevagh was dominated by farming. Most of those of working age were recorded as farmers with the exception of Ellen Stephens who was a seamstress and Annie Hughes who was a dressmaker. Patrick Stephens was listed as a farm servant, while Martin Farrell was listed as a farmer and miller. All of the land on which the houses were situated in Coolrevagh was owned by the occupier, with the exception of Mary Nolan’s home, where the land was owned by John Ryan.

All of those recorded in 1901 listed their place of birth as Co. Galway with the exception of the Farrell children – Daniel, Mary, Robert and Martin J. who were all born in America and Michael Tighe who was born in England.

The youngest people in the townland in 1901 were Walter Coleman and ‘Winifride’ (sic) Dunleavy who were less than 1 year old. The oldest person in the townland was James Ward aged 83.

As in 1901 there were 12 heads of family recorded in the 1911 census. All of those listed in 1901 were recorded again 10 years later with the exception of Mary Nolan who was not recorded in 1911 and James Ward, father of George, who was deceased by 1911. Anne Ryan aged 45 was recorded in 1911 but not in 1901. Anne was married but her husband’s details were not recorded. Anne lived with her children: Michael Joseph aged 17, John aged 13, Bernard aged 12, Mary aged 7 and Thomas aged 5. Anne’s aunt, Mary Keane aged 65 also lived in this home.

By 1911 Honor Coleman was a widow, as was Mary Farrell. There are a number of large discrepancies in age in this townland, to the extent that some people had aged between 18 and 20 years in the 10 year period between 1901 and 1911. The reason for this age discrepancy may have been the introduction of the Old Age Pension Act, 1908. Citizens had to prove they were aged 70, and if baptismal records could not be found, many were dependant on the national census returns. In the most extreme case, Honor Coleman, aged 60 in 1901 was recorded aged 93 in 1911. Honor lived with her son Michael, daughter-in-law Honor and grandchildren and could not read or write.

All of those recorded in 1911 owned the land on which their houses were situated. As in 1901 there were no 1st class houses listed. The majority of houses were 2nd class with 3-4 front windows.  Most of these houses had 3 rooms, where large families lived; 8 people in Mary Farrell’s house, 10 people in George Ward’s house, 9 people in William Dunleavy’s and 8 people in Honor Coleman’s house. Again, Mary Farrell’s house was the only house with a roof of tiles while the rest were constructed from thatch.

There were 37 out-buildings recorded in this townland.  Many people listed a cowhouse and piggery as part of their holding while George Ward recorded a stable, fowl-house, barn and an additional piggery. John Monaghan did not hold any out-buildings.

The Ordnance Survey (OS) maps 1837-1842[14] show the entire eastern border of Coolrevagh ran alongside the Grange river. A Mill Race and eel weir also ran along this boundary. Near the Corn Mill in the northeast of the townland, a set of stepping stones allowed for crossing over the river into the neighbouring townland of Grange.

Coolrevagh was reached by a small road in the west that led from the main road into Tuam and divided into 5 smaller lanes. Along these lanes a number of dwellings were situated in ‘Clachan-type’ settlements. These were clusters of houses without any shop, school or church that developed around fields close-by.

One of these roads transverses the entire townland, ending at the Mill in the east. 2 lanes led further north, ending at dwellings. Another stretched into the centre of Coolrevagh, while the remaining road travelled along the western boundary, terminating at the centre of the townland also. There were 2 lime kilns situated along the middle road in this network where the greatest number of dwellings existed. There were no dwellings in the south of Coolrevagh. Just south of the Corn Mill the ruins of a Roman Catholic Church were located.

A comparison between the OS 25 inch Map 1888-1913 and the Aerial map 2005[15], shows how the landscape and geography of the area has changed in some cases. The 1888-1913 map no longer shows the road or dwellings previously located along Coolrevagh’s western boundary. The map also shows the development of lime kilns and wells along-side the dwellings shown in the early map. A trigonometrical point was also located at the centre of the townland. The Mill Race and Grange River is still shown on the 1888-1913 map as well as a stretch of land around this area that was liable to flooding.

A large portion of land in the south of Coolrevagh was also liable to flooding, explaining perhaps, why historically there were no dwellings constructed there. The modern photographic map shows that Coolrevagh is mostly farmland. There are still no houses constructed in the south of the townland. The same small lanes exist, along with a number of houses that have been constructed. Many of these houses include sheds and other out-buildings. Some ruins of the RC Church and its original site are also visible on the modern Aerial map