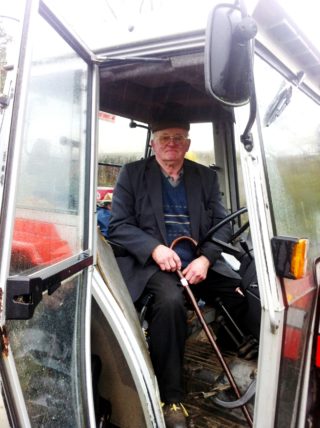 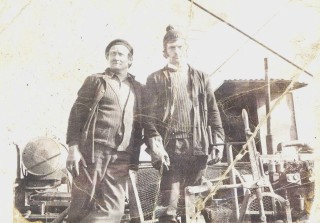 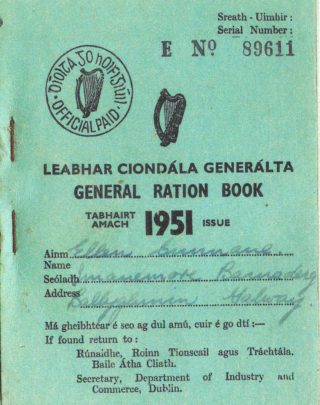 The following article has been put together for our Gastronomy Galway 2018 project.  Most of the interviewees for our Parish History book were from a farming background and the common themes throughout are diet, threshing, stations, killing the pig, going to fairs etc. I hope you enjoy reading these extracts and that you get a sense of what life was like for past generations in this locality.

John was born in the townland of Imanemore, Barnaderg. He grew up on a farm and has been farming all his life. …..

Farming would be the main occupation plus that of beet campaigner at the sugar factory in Tuam. Arthur and Kate Collins had a poultry station in the 1940s, mostly white leghorn hens. To keep the chickens warm, a big lamp was placed in the middle of a box with a cover; the chickens nestled under the lamp for warmth. The lamp was fuelled by paraffin oil and chaff was put around the lamp, which also helped to keep the chickens warm. The chaff was left over after the threshing of the straw. The lamp had to be kept lit or the chickens would die. All the farms had hens, turkeys, geese and ducks. They would keep 3 or 4 pigs, one of them for killing, as well as cattle, sheep, horses and donkeys for farm work.

Haymaking was a big job. Tea would have to be brought to the field. You would get an empty sweet can from the shop, clean it and have it ready for bringing tea to the field. It would be a job for the children to bring the tea to the workers. They would also put flakemeal into glass bottles and fill them with water. They would leave the bottles in the shade to have a drink of cold water during their work.

Martin Dolan in Barnaderg had a washtub for sheep where the farmers brought the sheep to be washed. The sheep had to be shorn within two weeks while the wool was still clean.

All farms had a dung heap beside their sheds and cabins. The sheds and cabins had to be cleaned every day and fresh straw put in. The dung would be put on the land in spring as a fertiliser. Some artificial fertiliser was bought in. It came in 2-cwt jute bags – super, potash, and guano (mainly ammonia). They would have to be mixed together (10 cwt. of super, 6 cwt. of potash and 4 cwt. of ammonia = 1 ton). Tom Devaney, Dangan, bought and stored manure at his house. He would collect it with the horse and cart at Ballyglunin station and the farmers bought it from him as they needed it.

The threshing season lasted from September to April. The thresher visited most farms twice a year, in autumn and spring. It would visit four or five farms in a day. Neighbours helped each other when the thresher came to the village. All the men helped, going from house to house. In all, eight to ten men were needed. Two men threw the sheaves from the cock of corn to the thresher; two were loosening the sheaves and feeding the thresher; two were underneath, bagging and moving the grain and two more were moving and making the straw cock. Extra help always came in handy. There would be rats and mice running everywhere.

The farmers used to get tea in every house, as it was thirsty work. It was great excitement for the children. They used to follow the thresher from house to house and used to throw chaff at one another. There would be fresh oats for the poultry and animals which helped the hens lay more eggs.

Jimmy and Mick Dolan from Brierfield had a horse-drawn thresher. Mick joined the army during the war, so Ned Moylan, Derreen, took over his job. They had an engine to start the thresher. They would put some petrol in first to start it, and then ran it on paraffin oil. They had to have a permit for the paraffin oil and petrol, as oil was rationed during the war. Later on, they used TVO tractor vaporising oil. You had to have a permit for that as well. In later years, Mattie Dolan, Brierfield, and Mattie Connelly, Clogherboy, had tractor-drawn threshers.

Beet and the sugar factory

When the sugar factory was built in Tuam in 1934, there was no road. There was only a boreen before the new road was built in 1939. The beet company gave employment to local farmers when the beet campaign started. …..

Beet was a good crop for the farmers. They could look forward to the beet cheque from the factory before Christmas. And the by-products from the factory, such as beet pulp for stock, were delivered in big half a cwt to 1-cwt canvas bags when the lorry came for the beet. When the bags were given back to the factory, the farmers were given half a crown (2/6) for each bag. There were girls employed in the factory mending bags. The crowned tops of the beet were fed to stock.

Follow the link below for an excellent TG4 documentary on the Sugar factory in Tuam.

There were no marts in those days – only fairs. The cattle and sheep had to be walked to the fairs. The main fairs were for sheep; the 10th of September was a big fair for ewes in Tuam. A lot of big farmers in the Ballinasloe area bought sheep in Tuam and employed drovers to drive the sheep to Ballinasloe. They had stops on the way to rest. The Bleheens were big buyers and there were also buyers from other parts of the country. October fairs were for cattle and horses. Joe Bruton, father of John and Richard TDs, was the biggest buyer of cattle in Tuam.

The shopping would be done in Barnaderg or at the market in Tuam on Saturdays. James Fahy had a pub, which is now the Red Gap and before that was a grocery, hardware and a post office. They bought wool and turkeys at Christmas time and they sold manure for crops. Bobby Gilmore had a shop where Stone’s shop is now. He sold groceries, some hardware and bag meal for poultry and animals. He also had a horse-drawn travelling shop.

During the war years, Finnerty’s and Cheever’s in Moylough also came to the area with their horse- drawn travelling shops. Joyner’s had a pub beside Fahy’s. Mrs Fagan had a sweet and confectionary shop. Keane’s shop sold groceries and bag meal. John Brannelly (Sean Fahy’s now) had a pub and grocery. Tom Mitchell had a shop in Barracks. He was an egg exporter and had two lorries on the road. He had groceries as well. Tom Mitchell’s father, Pat, had a horse-drawn travelling shop. He collected eggs from the local people……

Every house had a ration book. Each person was allowed half an ounce of tea per week and the same with sugar. Although Ireland had its own sugar factories, sugar was only allowed for tea. Bread was rationed as well. Flour was scarce. They used to bring the corn to Farrell’s mill to convert it to meal; they would add the meal to the flour to supplement it. There was Indian meal but people did not like it as it was hard to digest. Oatmeal was used for making porridge or (gruel). Oaten bread was also made on a griddle in front of the fire. Everyone had open hearths.

………..If a person did not wish you well, they would put eggs in the headlands of the field, to bring you bad luck……….

The full interview with Johnny which is quite extensive can be read on Pps 426 – 432 of Killererin – A Parish History which is available for sale elsewhere on this site.